“Due impartiality usually involves more than a simple matter of ‘balance’ between opposing viewpoints. We must be inclusive, considering the broad perspective and ensuring that the existence of a range of views is appropriately reflected.” 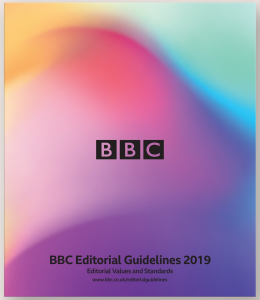 “When dealing with ‘controversial subjects’, we must ensure a wide range of significant views and perspectives are given due weight and prominence, particularly when the controversy is active.”

The BBC’s public purposes commit the corporation to providing:

“…duly accurate and impartial news, current affairs and factual programming to build people’s understanding of all parts of the United Kingdom and of the wider world.”

The corporation’s recent coverage of the as yet theoretical application of Israeli civilian law to specific parts of Area C provides an opportunity to look more closely at the issue of impartiality in BBC coverage – in this case on the domestic radio station Radio 4 and on BBC World Service radio.

While the tables below are not exhaustive, they give an overview of how the BBC addressed its obligations to provide “a range and depth of analysis” and to reflect “a range of views”.

Programmes aired after July 1st – the date on which, according to the coalition agreement, the topic of application of Israeli civilian law to parts of Area C could be brought to the cabinet for discussion as part of a process which includes further discussion in the Foreign Affairs and Defence Committee and in the Knesset – are marked with a pale yellow background. 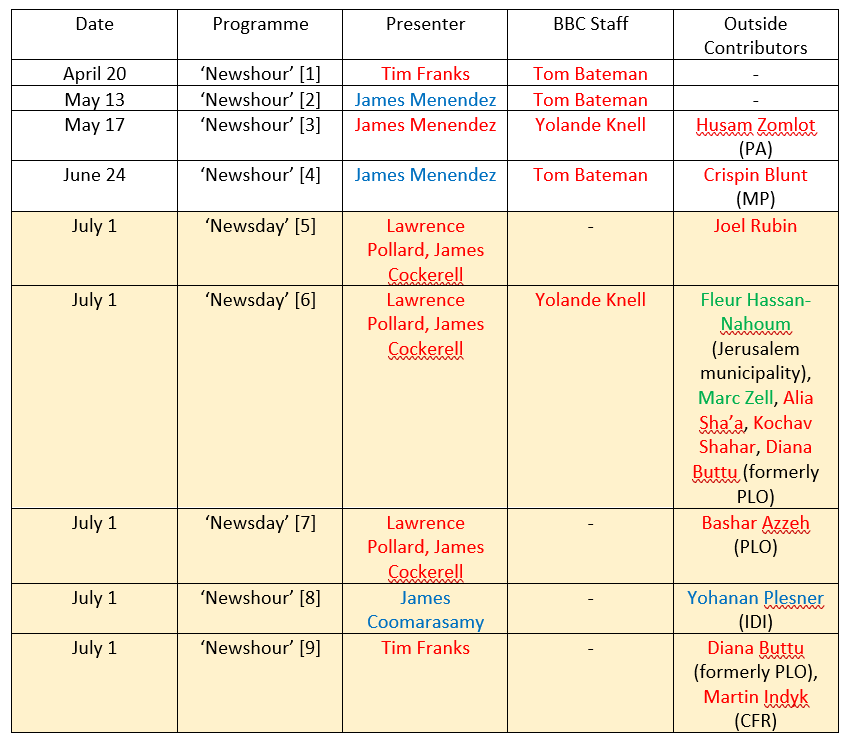 As we see, “due weight” was not given to opinions dissenting from the BBC’s chosen framing of the topic and audiences did not hear a balanced “range of views”. The BBC chose to give airtime to current and former Palestinian officials (Buttu, Zomlot and Azzeh) while the sole interview with an Israeli MK (Haskel) was shorter and of very bad quality. Interviews were conducted with one representative from an Israeli think tank (neutral) and two representatives from US think tanks (both negative). Audiences heard from one British MP (negative) and one former US official (negative) as well as the deputy mayor of Jerusalem (positive).

The majority of reporting from the BBC’s own staff gave negative portrayal of the topic which was repeatedly presented as a ‘consensus’ view and the terminology used by BBC journalists and presenters (e.g. ‘annexation’, ‘West Bank’, ‘occupied’) was not impartial.

Both those BBC radio stations gave audiences were given an overwhelmingly one-sided view of the issue. The main talking points (e.g. the supposed demise of the two-state solution, the portrayal of the proposal as ‘illegal annexation’) corresponded with those promoted by the PLO. Listeners were not provided with the historic background essential for full understanding of the topic. They did however hear repeated use of the misleading ‘apartheid’ and ‘Bantustan’ smears which went unchallenged in all cases.

The purpose of the editorial guidelines is of course to enable the BBC to meet its public purpose obligations, including the provision of “duly accurate and impartial news, current affairs and factual programming to build people’s understanding of […] the wider world”. It is abundantly obvious that BBC journalists were once again far more intent on establishing a specific narrative in the minds of audiences than they were committed to providing accurate and impartial content offering a “wide range of significant views”.