This is the sixth post in a series by CAMERA Arabic (part 1, part 2, part 3, part 4, and part 5) documenting how Arabic language news networks, including those affiliated with Western media outlets, frame the topic of Jews originating from or living in the Middle East and North Africa by distinguishing between ‘loyal’ Jews and ‘treacherous’ Zionists.

(All translations, emphasis and in-bracket remarks are by CAMERA Arabic unless otherwise specified.)

BBC Arabic’s “Xtra” magazine, which describes itself as a programme that “sheds light on distinguished human stories [taken] from our lives”, aired a July 9th 2019 programe titled “Jews of the Mashreq – victims of a religious conflict or political manipulation?”. The second of two programs focusing on Jewish communities in the Arab world was presented with the following synopsis:

“What do we know about the Jewish culture [and] its connection with the Arab world? Are the followers of the Jewish religion victims of religious or political manipulation? In the second part of this BBC Xtra we shall focus the debate on the Jews of the Mashreq lands [i.e. the eastern part of the Middle East and North Africa. In this case the word collectively signifies Egypt, the Fertile Crescent, the Arabian Peninsula and the Gulf].

“We shall engage in dialogue regarding the condition of followers of the Jewish religion in the Mashreq states, what is the fate of those among the Jews of the East who remained in the Arab States? And what is the view of those Jews who moved to Israel?”

The highlighted question is a seemingly promising novelty since Jewish Israelis have been largely excluded from the discourse surrounding Middle Eastern Jews in Arabic language media and their opinions seldom sought, even when mentioned. That exclusion is particularly notable given that Israelis make up well over 99% of the Jews who live in the region today, that the vast majority of Jews with Mizrahi ancestry now live in Israel and that they form a majority among the Jews of Israel.

In a previous “Xtra” programe broadcast eleven days earlier which dealt with the Jews of North Africa (the Maghreb), the BBC had shown some signs of taking a different path. The program featured a brief interview with a Jewish man, Amnon Sofer from the Israeli city of Ashkelon, who visited his birthplace in Tunisia which he left as a toddler fifty years ago. As Sofer was shown walking down a street in Djerba, the voiceover of a Tunisian Rabbi was heard, pointing out one of the most politically sensitive aspects of the issue of Middle Eastern Jews:

“One cannot enter [Tunisia,] his land, […] without the consent of a high official, just because he departed to live in Israel.”

What then was “the view of the Jews who moved to Israel” presented in this second program? The BBC’s attempt to present an answer to the question they themselves posed was weak at best. The first of the programme’s items was based on a complete distortion of the question through the “exoneration of Zionism” lens, featuring a person who was introduced as a “Jew of Palestine” and who identifies completely with the campaign to deprive Jews in Israel of their right of self-determination.

The last item was more appropriate but had one major flaw: the interviewee, despite being an Israeli citizen who was unafraid to speak favourably of the country (a view rarely aired by BBC Arabic), had only lived in Israel between 1973-1987 and has resided in London ever since.

With “Jews of the Arab Mashreq” written behind him, host Saif ad-Deen ar-Ruba’i opened the program as follows:

01:04 – “Today’s episode focuses on the Jews of the Arab Mashreq, who are the Jews of Lebanon, Palestine, Egypt and Yemen”.

Contrary to “the view of the Jews who moved to Israel” that appeared in the synopsis, the TV programme used term the “Jews of Palestine”. According to ar-Ruba’i:

01:15 – “We shall start from the heart of the conflict, from Jerusalem, where there are many Jews who live in what is [found] between Israel and the Palestinian territories. Some of them have integrated into the Israeli society, however some of them refuse, and are not interested in integrating into this Israeli society.”

At first glance (and knowing BBC terminology) one could deduce that the area in Jerusalem that is found “between Israel and the Palestinian territories” is eastern Jerusalem. Nevertheless, the item featured neither an eastern Jerusalemite Jew, nor one with any recognisable Middle Eastern ancestry.

Instead, it showcased Avi’ad Neiger, a Satmar Ashkenazi Hassid “from West Jerusalem” (01:46), who apparently earned his “Arab Mashreq Jew”/”Jew of Palestine” credentials because of a single trait: his political beliefs which include vehement opposition to Israel’s establishment and support of a Greater Palestine (like Fatah and Hamas, as was implied at 02:03). While host ar-Ruba’i ascribed his refusal to integrate into Israeli society to “some” of the Jews in Jerusalem and the integration into Israeli society to “some” others, it is important to note that the two groups are by no means similar in size. In contrast to  ar-Ruba’i’s misleading claim, the total membership of Neiger’s group is according to generous estimates more than 30 times smaller than the rest of Jewish Jerusalemites and more than 200 times smaller than the rest of Jewish Israelis, i.e. the “integrated Israeli society” from which they distinguish themselves.

Not only does Neiger live in western Jerusalem rather than between it and the Palestinian territories, the item’s subtitles even pointed out that he never crosses into eastern Jerusalem as a matter of principle: 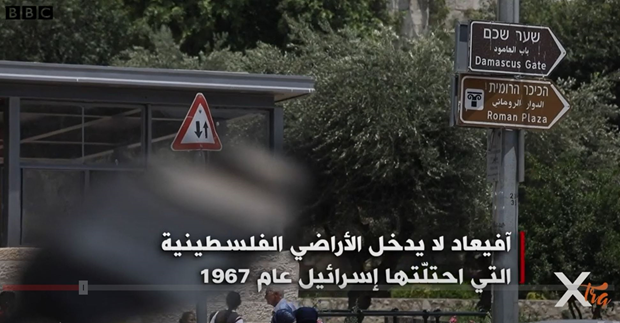 Strangely enough, he was shown doing exactly that seconds after, being interviewed next to Damascus Gate in eastern Jerusalem and expressing discomfort caused by his location: 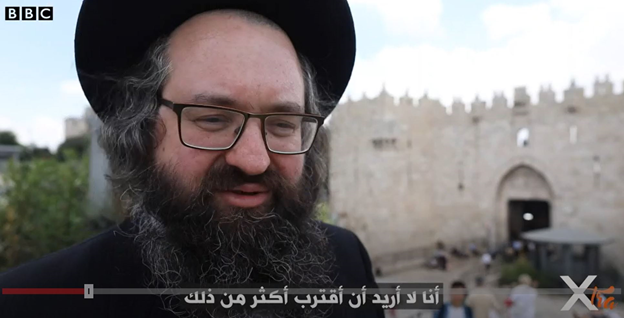 Neiger: “I do not wish to draw any closer”. In fact, he is already in eastern Jerusalem at this point.

The item was made up almost entirely of Neiger’s unchallenged monologue in which he espoused his anti-Zionist worldview as the only reasonable conclusion from his Jewish beliefs and his aspiration for peace and coexistence between Jews and Arabs. BBC Arabic’s video editing team seemed eager to help him with the portrayal of Zionists as inherently hostile to those causes; for example they added subtitles translating graffiti sprayed adjacent to his apartment building, in order to demonstrate the harassment he allegedly experiences. 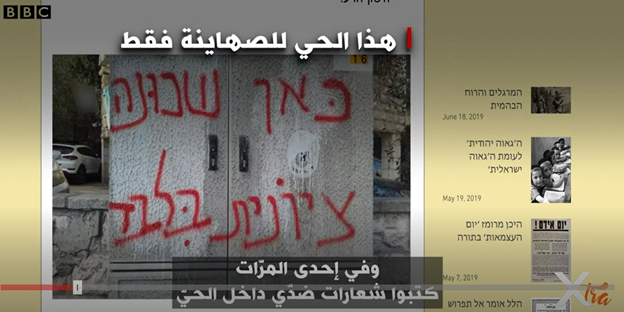 “This neighborhood is exclusively Zionist”. The subtitle beneath translates Neiger’s voiceover: “One time they wrote slogans against me inside the neighborhood”

However, the video editors refrained from translating graffiti stating “entry is forbidden for Zionists” in a different neighborhood of western Jerusalem, shown on screen less than a minute before: 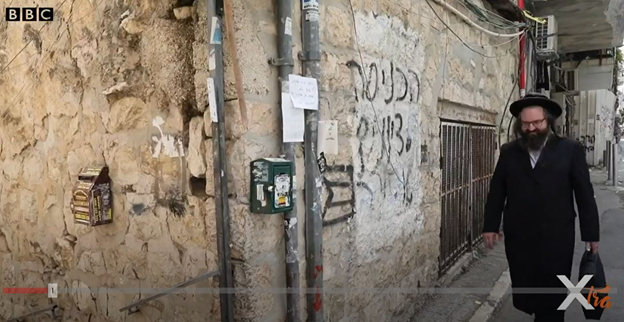 Clearly the portrayal of Avi’ad Neiger – a Jew affiliated with a Hassidic group established in Transylvania as late as 1928 – in a programme allegedly about the “Jews of the Mashreq” is ridiculous. However it is hardly coincidental, given the prominence his tiny ultra-Orthodox sect of “Edah HaCharedis” in recent years in Palestinian and Iranian propaganda seeking to demonstrate how some ultra-Orthodox are a living proof that there is nothing Jewish about Zionism.

As for the sect’s claim to “indigeneity” (which, it seems, BBC Arabic uncritically accepts), we must add that it is questionable according to Palestinian nationalists, since they typically attribute the beginning of the “Zionist invasion” into the land to the 1880s while Neiger’s ideological forbears only became politically organised throughout the 1920s and 1930s. Hence, the anti-Zionist ultra-Orthodox do not even meet the standard of the more “moderate” 1968 Amended Palestinian Charter, which sets the watermark of Jewish legitimate presence in what it calls “Historical Palestine” at the Balfour declaration of 1917.

The last item of the programme focused mainly around Iraq and featured an interview with Iraqi born Jew Niran Bassoon who articulated an opinion that is rarely heard in Arabic language media reports portraying Middle Eastern Jews. This is how Bassoon responded to her interviewer’s accusation that the Zionist movement encouraged the Jewish exodus from Arab lands:

23:19 – “First of all I would like to establish something, what is the Zionist movement. Zionism is the idea that calls the Jews to return to Zion. Zion is a synonym of Jerusalem, because it is in Jerusalem where Mt. Zion is found. The Kingdoms, the Judean Kingdom, or Israelite Kingdom, were in Jerusalem […]. These are the facts, this is history, I’m not making it up out of nothing. When pressures weighed down on the Jews of Iraq or the Arab States, one expects of the Jews of the world to [find a] solution for these Jews.

This view of the Mizrahi Jewish story is rarely found in Arabic language media but even so, it was a London resident who was chosen to convey it to BBC Arabic’s audience. Although Bassoon was described as “a Jew who moved to Israel” on the program’s webpage, it is the United Kingdom to which she refers as “home” (26:56), while Iraq is her “mother” (27:02) and Israel is her “refuge” (27:00).