The July 13th edition of the BBC World Service radio programme ‘Witness History’ was titled “The fight for women’s prayer rights in Israel”. 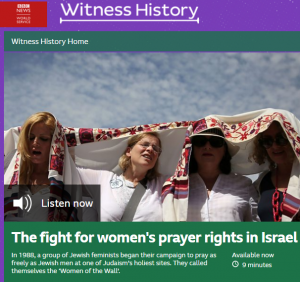 “In 1988, a group of Jewish feminists demanded the right to pray as freely as Jewish men at one of Judaism’s holiest sites. They called themselves the ‘Women of the Wall’. The organisation is made up of every Jewish denomination including reform, conservative and orthodox Jews. Its focus is one of the holiest sites in Judaism – the Western Wall in Jerusalem.
Rachael Gillman has been speaking to Anat Hoffman, one of the founding members of ‘Women of the Wall’.”

While that organisation’s campaign has been featured by the BBC on several occasions in the past, this latest programme includes several noteworthy points.

Although BBC editorial guidelines on impartiality state that details of outside contributors’ “affiliations, funding and particular viewpoints should be made available to the audience”, Ms Hoffman’s roles at the ‘Israel Religious Action Center’ (IRAC) and that organisation’s related activities – including legal action – were not disclosed.

Listeners heard a potted history of the site that is the topic of the programme which – as is standard BBC practice – erases events that took place before June 1967, including the 19-year Jordanian occupation of parts of Jerusalem that the BBC elects to define as “East”.

“Its [WoW] focus is one of the holiest sites in Judaism: the Western Wall in Jerusalem. It’s one of Judaism’s most sacred sites. It comes with strict Orthodox traditions, worshippers segregated according to sex. The Western Wall is a site that is important in Islam as well as Judaism. It’s the only structure that remains of the supporting wall of the second Jewish Temple on Temple Mount: an area of East Jerusalem that Israel took control of in 1967.”

At no point in this programme were listeners informed of the existence of the mixed-gender prayer area at the Western Wall. While plans to expand and renovate that area have yet to be implemented, it nevertheless functions as a facility where the type of prayer rituals described by Hoffman in the interview can be performed.

Although listeners were told that Hoffman and ‘Women of the Wall’ are “still fighting for the right to read from the Torah at the Wall”, they were not provided with the information which would enable them to understand that that ‘fight’ focuses on one specific part of the Western Wall and that the “right to read from the Torah” is already available to women and men alike just several meters away.

As can be seen in the ‘related articles’ below, this is not the first time that the BBC has failed to provide its audiences with information that would enable proper understanding of this story.