In February of this year the BBC’s response to a complaint from CAMERA UK acknowledged that the PLO representative in London, Husam Zomlot, “is not strictly speaking an ambassador” and said that it would “remind editors of his actual title”.

If given, that reminder was apparently not very effective because – despite the fact that the UK does not currently recognise a Palestinian state and Mr Zomlot has never presented credentials to the Queen as required by protocol – the inaccurate title ‘ambassador’ was recently used again.

The synopsis to the July 16th edition of ‘Hardtalk’, aired on the BBC World News channel and the BBC News channel, and that of the audio version of the programme broadcast on BBC World Service radio the following day states: 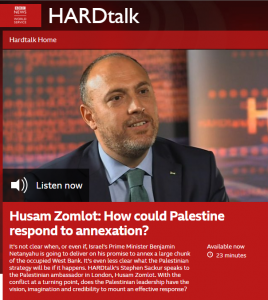 Despite the fact that the BBC Academy’s style guide clarifies that “[t]here is no independent state of Palestine today”, the radio version of the programme was presented with the title “How could Palestine respond to annexation?”.

Stephen Sackur likewise described Zomlot as an ‘ambassador’ in his introduction: [emphasis added]

Sackur: “My guest today is a trusted envoy of the veteran president of the Palestinian Authority, Mahmoud Abbas. Husam Zomlot represented the Palestinians in Washington during the early days of the Trump administration but his office was then closed down. Currently he’s the Palestinian ambassador in London.”

Sackur repeatedly addressed his interviewee using that inaccurate title throughout the interview even though Zomlot clarified that he in fact represents the PLO.

Obviously the BBC did not appreciate the contradiction between its repeated inappropriate use of the title ambassador and its promotion on the BBC News website of a clip from the interview in which Zomlot stated that he had been urging the British government to recognise a Palestinian state.

Zomlot: “But we also would like to see more action and we have been saying this to the government here. Netanyahu will not listen out of just statements. He need to know that there will be severe consequences and the State of Palestine need to be recognised now because if you don’t recognise it now, level the field, give hope about the two-state solution, then if you do that later it not really serve any purpose.”

The BBC continues to mislead and confuse audiences by using the term ‘Palestine’ even though it acknowledges that such a state does not exist and by referring to Husam Zomlot as an ambassador – i.e. the representative of a state – even though it has corrected that inaccuracy on previous occasions.

The ‘Hardtalk’ interview with Husam Zomlot will be discussed in an upcoming post.

BBC JOURNALISTS GET A ‘BRIEFING’ FROM A PAST INTERVIEWEE