“The Jewish community has reacted with horror at news that the head of Britain’s biggest Muslim charity labelled Jews the “grandchildren of monkeys and pigs”.

A former trustee and director of the charity, […] Khalifa called Palestinian terror group Hamas “the purest resistance movement in modern history”, and that labelling its armed wing a terror group was “shameful disgrace to all Muslims”. The former charity boss also said Egypt’s president was a “Zionist pimp”. […]

A Charity Commission spokesperson said: “Antisemitic and racist comments are abhorrent and have no place in charity. We have opened a compliance case and contacted the charity for a response to these serious allegations. The charity is cooperating with our continuing enquiries and we have been informed that the individual has resigned as a trustee.”” 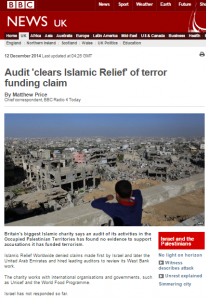 Given that Khalifa had worked for the Muslim Brotherhood connected IRW since 1999, his opinions concerning Hamas are of no less interest than his antisemitic comments. Readers may recall that in 2014 the BBC promoted the charity’s denial of “any links with Hamas” in response to a statement made by the Israeli embassy in London mentioning IRW’s designation in Israel due to its association with Hamas affiliated organisations. Later the same year the BBC published a remarkably superficial article concerning a self-commissioned ‘audit’ which supposedly cleared IRW of “accusations it has funded terrorism”.

With IRW having been the recipient of funding from the British government (as well as the UN and the European Commission), the story of Khalifa’s resignation was understandably picked up by additional UK media outlets including the Guardian, Metro, the Daily Mail and the Jewish Chronicle.

Notably, we have to date been unable to find any coverage of the story on the BBC News website, including on its ‘Charity Commission’ page and ‘Charities’ page.

BBC INTERVIEWEES APPEAR IN REPORT ON EXTREMISM IN UK CHARITIES