Members of the public searching online for information about the Gaza Strip produced by the BBC – which promotes itself as “the world’s most trustworthy news service” – will come across a backgrounder titled “Israel-Palestinian conflict: Life in the Gaza Strip” among the first results.

Now dated May 15th 2018, that backgrounder was originally published in July 2014 and it not infrequently appears as a ‘related articles’ link in BBC News website content relating to the Gaza Strip.

The introductory paragraphs to the 2014 version informed readers that: [emphasis added]

“Originally occupied by Egypt, which retains control of Gaza’s southern border, the coastal territory was captured by Israel during the 1967 Middle East war.

When Hamas took over in Gaza, Israel swiftly imposed a blockade on the territory, restricting the movement of goods and people in and out. Egypt meanwhile blockaded Gaza’s southern border.” 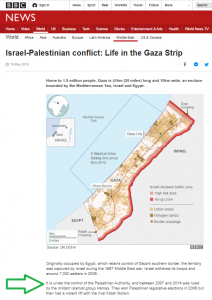 “Originally occupied by Egypt, which retains control of Gaza’s southern border, the territory was captured by Israel during the 1967 Middle East war. Israel withdrew its troops and around 7,000 settlers in 2005.

It is under the control of the Palestinian Authority, and between 2007 and 2014 was ruled by the militant Islamist group Hamas. They won Palestinian legislative elections in 2006 but then had a violent rift with the rival Fatah faction.

When Hamas took over in Gaza, Israel swiftly imposed a blockade on the territory, restricting the movement of goods and people in and out. Egypt meanwhile blockaded Gaza’s southern border.

Hamas and Israel fought a brief conflict in 2014, with the Israelis attempting to end rocket fire from Gaza and the militants fighting to end their isolation.”

The Gaza Strip has of course not been controlled by the Palestinian Authority since Hamas executed a violent coup in June 2007 and Hamas control of the territory did not end in 2014, despite a supposed Hamas-Fatah deal in that year.

In April 2019 CAMERA UK prompted the BBC to correct a report which – apparently on the basis of that backgrounder – made the exact same claim. The same month the BBC also corrected its Palestinian territories profile and timeline which had no less erroneously claimed that Hamas handed over control of the Gaza Strip to a unity government in October 2017.

Despite having made those three corrections concerning the very basic issue of which Palestinian faction controls the Gaza Strip, the BBC obviously did not check additional content – including its backgrounder – for similar issues and both audiences and BBC journalists are hence likely to be misled by those factual inaccuracies which have remained online for years.

CAMERA UK has contacted the BBC to request a correction.