On August 2nd an article headlined “Music stars including Lewis Capaldi and Rita Ora call for end to racism” was published on the BBC News website’s ‘Entertainment & Arts’ page. 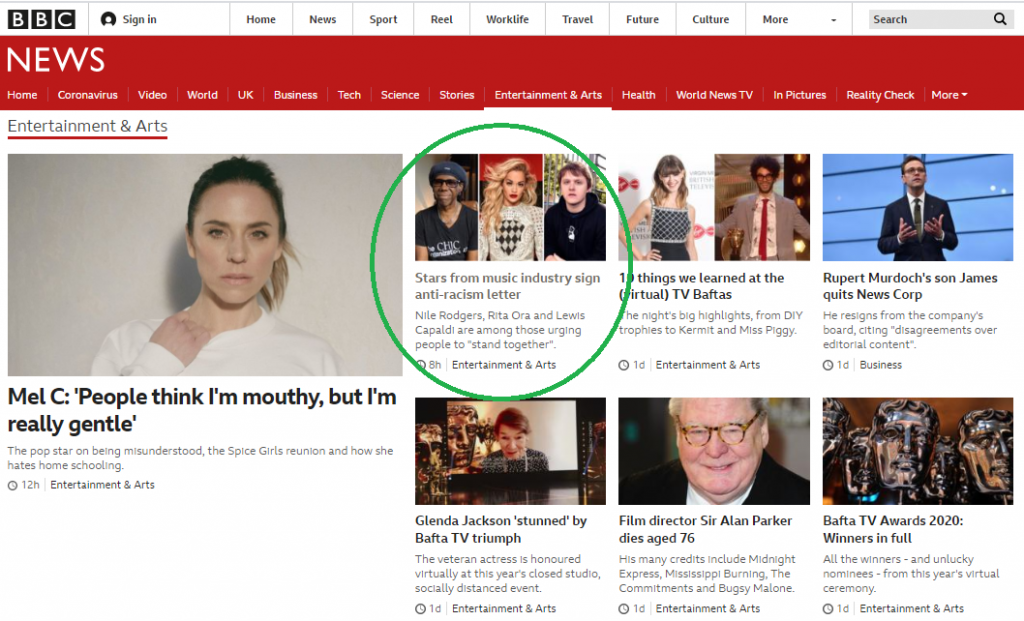 “More than 700 people from the UK music industry – including artists, managers, producers and companies – have written an open letter urging people to “stand together” and “wipe out racism now”. […]

“We are at our worst when we attack one another,” the letter said. 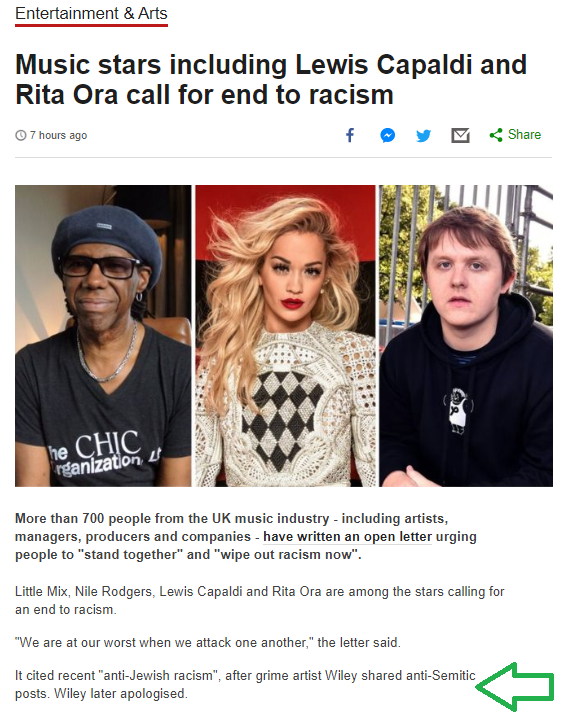 Towards the end of the article readers were again told that:

“Wiley – known as the “godfather of grime” – recently made headlines after sharing a series of anti-Semitic tweets.

He was dropped by his management and later banned by Twitter, following a public boycott of the social media network.

In an interview with Sky News last week, Wiley apologised for “generalising” about Jewish people and said: “I’m not racist.”” [emphasis added]

But is the BBC’s account accurate? In the context of social media, sharing often means the redistribution of content created by someone else rather than publication of one’s own original posts. Unlike the BBC, the Sky News interviewer Noel Phillips was able to clarify to his audience that the antisemitic Tweets were written by Wiley himself:

“…he posted a series of antisemitic comments on social media…”

“UK rapper Wiley has been heavily criticised after posting a series of antisemitic tweets. In an exclusive interview with Sky News, he denies he is racist.”

The BBC’s use of the words “shared” and “sharing” obviously does not adequately clarify who wrote the antisemitic Tweets.

Sky News presented that filmed interview on its own ‘Entertainment & Arts’ page with the caption:

“After an antisemitic diatribe on social media, the rapper Wiley has refused to distance himself from most of his comments.”

During the interview Wiley said:

However, the Sky News reporter also noted that during the interview Wiley made similar comments to the ones he posted on Twitter, describing them as “too inflammatory to broadcast”. The reporter also said that “despite saying he regrets the generalisations he made about Jewish people”, his interviewee went on to make more statements in a similar vein. The president of the Board of Deputies of British Jews, who also took part in the report, observed that “he’s clearly not sorry whatsoever”.

Nevertheless, the BBC would have its worldwide audiences believe that “Wiley later apologised”.