An article in The Times by their Mid-East correspondent Richard Spencer (“Umm Kulthum: Discord over memorial to Arab singer in Israeli city”, July 29th) included the following sentence:

East Jerusalem and the city of Ramallah on the West Bank already have statues of Umm Kulthum but both are in Palestinian territory occupied by Israel in 1967.

Whilst Ramallah is indeed in Palestinian territory (under PA rule in Area A of the West Bank, per the Oslo Accords), that is not true of east Jerusalem.  Though Palestinian leaders have expressed hope that the ‘eastern’ part will be the capital of a future state, it is currently the capital of Israel, which controls and administers the entire city.

Tellingly, the PLO has argued to the International Criminal Court (ICC) that east Jerusalem is sovereign Palestinian territory – a talking point mirroring The Times’ new formulation.

Of course, no part of Jerusalem was ever, at any point in history, Palestinian territory. From 1948 to 1967, it was occupied by Jordan. Before that, it was part of the British Mandate. And, before that, it was under Ottoman control.

In fact, in 2018, CAMERA prompted a correction to an Associate Press (AP) article which similarly claimed that east Jerusalem was in Palestinian territory: 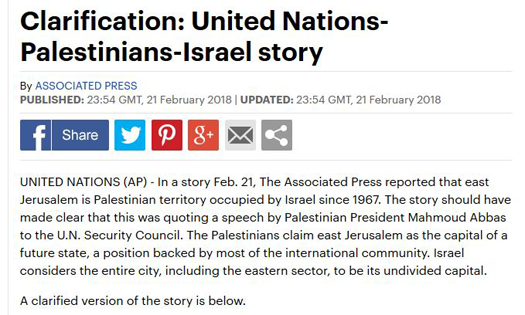 Even the BBC’s style guide advises their journalists that “the phrase ‘Palestinian Territories’ refers to the areas that fall under the administration of the Palestinian Authority”.  As east Jerusalem is not ruled by the PA, the BBC wouldn’t refer to that part of the city as “Palestinian territory”.

Finally, in researching references to east Jerusalem at The Times, we were unable to find any other article asserting that east Jerusalem was in “Palestinian territory”.

Like Loading...
Tags from the story
Delegitimization, East Jerusaelm, Israel, Jerusalem, The Times, The Times of London, Times of London
Written By
Adam Levick
More from Adam Levick
Last month, we sent a complaint to editors at The Independent over...
Read More