“The Israel Defense Forces on Monday said that following last night’s security incident along the Syrian border — which saw the army kill four armed men who crossed the border and planted bombs — troops scanned the area and found a gun, as well as a backpack with several more bombs ready for use.

The items were found inside Israel, 25 meters from the border, the army said. […]

Soldiers from the Maglan special forces unit and unspecified aircraft opened fire at the four suspects, some of whom were armed, killing them all, IDF Spokesperson Hidai Zilberman told reporters Monday morning.”

Although Jerusalem based BBC staff knew about that incident it did not receive any coverage on the BBC News website until Israel responded to the attempted attack some 24 hours later. Early on August 4th a report headlined “Israel strikes Syrian army bases after Golan Heights attack” was published on the website’s ‘Middle East’ page. 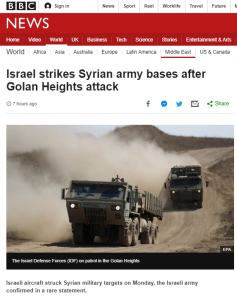 The caption to the main image illustrating the report reads “The Israel Defense Forces (IDF) on patrol in the Golan Heights” while the original caption to that EPA photograph made no mention of a “patrol”. 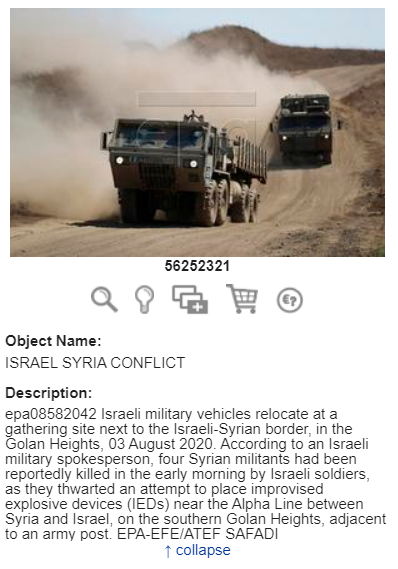 Regarding the August 2nd incident, readers were told that:

“The IDF said earlier it had killed four men planting explosives near the Israeli-occupied sector of Golan Heights late on Sunday.

Surveillance footage showed the group engulfed in an explosion.

Military spokesman Lieutenant-Colonel Jonathan Conricus said it was too soon to say if the men belonged to a specific organisation, but that Israel held “the Syrian regime accountable”.” [emphasis added]

In fact the IDF clarified that the incident took place on the Israeli side of the ceasefire line known as the A-line (which marks the western side of the demilitarised zone between Israel and Syria) rather than “near” it.

“The men were first seen approaching the area at around 8 p.m., and they crossed the official Israel-Syria border — but not the security fence separating the two countries, which lies a few meters west — some three hours later.

“They crossed the ‘alpha line’ so they were totally within Israeli territory,” Zilberman said, referring to the technical term for the line marking the Israel-Syria border.”

BBC audiences were not informed that in order to reach that location the armed infiltrators would have had to cross through the demilitarised zone supposedly monitored by UNDOF.

The BBC’s report also referred to an incident unrelated to its subject matter which took place in eastern Syria in the early hours of August 3rd.

“Meanwhile, the Syrian Observatory for Human Rights said that dawn air raids on the city of Boukamal, near the Iraqi border in the northeast, had killed 15 people.”

“Tensions have been rising between rivals Israel and Syria, particularly along Israel’s northern frontier, since an apparent Israeli air strike killed a Hezbollah fighter in Syria two weeks ago.

Israel had anticipated that the Iranian-backed Lebanese group would retaliate.”

Readers were once again not provided with any context such as an explanation of what a member of the Lebanese terrorist organisation was doing in Syria or what was the target of that “apparent Israeli air strike” near Damascus airport.

Not for the first time we see that an attack across Israel’s border with Syria was not considered newsworthy until Israel responded.