The following brief story appeared on page 4 of The Times on Aug 5th. 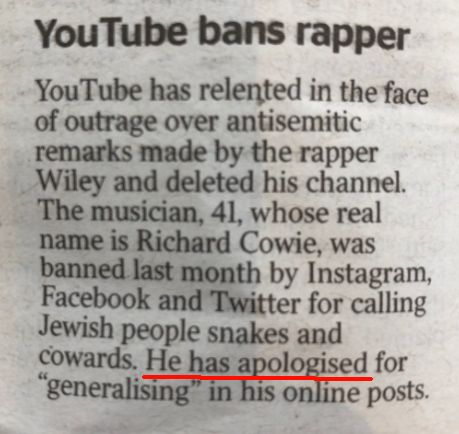 As CAMERA UK demonsrated last week in a post about the BBC, the Sky News interview in question, where Wiley said he shouldn’t have “generalised” about Jews, also included instances where the musician repeated the antisemitism from his previous social media posts.

In fact, the Sky News reporter that interviewed Wiley noted that during the interview the rap artist made similar antisemitic comments to the ones he posted on Twitter, describing them as “too inflammatory to broadcast”.

In a subsequent interview with Wiley published at The Voice, a newspaper for the black community, on the same day, Wiley again complained about Jewish power and wealth, and accused  Jews of viewing black musicians as their slaves.  (Though the interview was later deleted from The Voice’s website after complaints that interviewer seemed to legitimise some of Wiley’s anti-Jewish vitriol, you can see cached version of the article here.)

We’ve argued previously that even for those who say things that are beyond the pale, there absolutely must be a way back, and that we must allow for repentance and forgiveness and what in Judaism is called teshuva.  However forgiveness begins with a genuine and unequivocal apology, a commitment to never again repeat the hateful words you uttered, and a sincere effort to make amends with those you offended.

Given his remarks during the interviews with Sky News and The Voice, Wiley – despite admitting he shouldn’t have “generalised” – clearly hasn’t truly begun this process.  He appears to be largely unrepentant, seems to still possess a visceral hostility towards the Jewish community, and, worse, feels that he’s the victim.

Thus, it’s grossly misleading for The Times – or any other media outlet – to claim that Wiley has “apologised” for his antisemitic remarks.