On May 15th the BBC Arabic website published a photo feature and timeline of Mandatory Palestine, commemorating the 72nd Nakba Day. That account of events between 1915 and 1948 included misleading content ranging from erroneous phrasing to falsehoods. 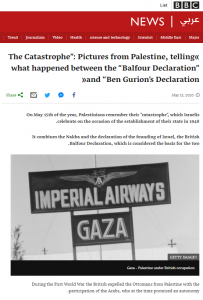 Following communication from CAMERA Arabic between May 17th and May 21st, two cosmetic alterations were made to the original text which had little to do with the points we raised. A Stage 1b complaint which was submitted on June 3rd has gone unanswered for more than two months despite the policy set out in the BBC’s complaints framework.

Below are some the errors which appeared in the item, followed by our related correspondence with BBC and observations (all translations, emphases and in-bracket remarks are by CAMERA Arabic).

1) The item states: “On May 15th of every year, Palestinians commemorate ‘their catastrophe’, which Israelis celebrate as a holiday of their country’s establishment“.

CAMERA’s complaint: (May 17th): Since Israeli and Jewish holidays follow the Hebrew calendar and not the Gregorian one, Israel’s Independence Day only rarely falls on May 15th. In 2020, it was April 29th.

BBC response: (May 21st): “A more accurate translation of our article would translate “عيد” as anniversary celebration not as “holiday” (as an official “national Independence Day”). We use the Gregorian calendar and the Palestinian “Nakba” is defined as that very day that Israel was Established on that land! Also, previous BBC articles do refer to both events as tightly linked. Please find note this quote from a fact file written by Jeremy Bowen, BBC Middle East editor: (“Every year for Palestinians this anniversary is a reminder of what they call the Nakba, or catastrophe. For them the last 60 years have been about dispossession and exile.”)

CAMERA’s observations: It is unclear why did BBC Arabia’s editors feel the need to share with us which particular calendar they use considering that it is the day that Israelis observe that was at the core of their error. Of similar irrelevance is the proper translation of the word “عيد” in this context.  Even if the one chooses to translate “عيد” as “anniversary celebration” or “commemoration” (We would prefer using another word, ذكرى) the entire sentence would still wrongly identify Israel’s day of observance with May 15th.

2) The item states: “On May 15th of every year, Palestinians commemorate ‘their catastrophe’, which Israelis celebrate as a holiday of their country’s establishment”.

Due to character limitation in BBC’s complaint form, CAMERA Arabic did not address this (relatively marginal) point. However the famous scene of the declaration of Israel’s independence happened on the afternoon of May 14th, 1948. In other words, even if Israelis did commemorate the establishment of their state according to the Gregorian calendar every year (they hardly do), it would have been on May 14th, not 15th.

3) The item states: “During WW1, the British rebuffed the Ottomans from Palestine, with participation of the Arabs who were promised a self-rule at the time.”

CAMERA’s complaint: This phrasing is misleading, since the Arab self-rule that was discussed with the UK (under the 1915-6 Hussein-McMahon correspondence) was in what is today Syria, Lebanon, Iraq and Saudi Arabia.

BBC response: The wording we have used is accurate and factual! The very Ḥusayn-McMahon correspondence, that was mentioned in the complaint is, as defined by the Encyclopaedia Britannica: (“A series of letters exchanged in 1915–16, during World War I, between Ḥusayn ibn ʿAlī, emir of Mecca, and Sir Henry McMahon, the British high commissioner in Egypt. In general terms, the correspondence effectively traded British support of an independent Arab state in exchange for Arab assistance in opposing the Ottoman Empire”).

CAMERA’s observations: Indicating that the Arabs “were promised self rule at the time” right after mentioning how “the British rebuffed the Ottomans from Palestine” creates the false impression that the Arabs of Palestine were promised self rule in a way that was somehow exclusive or separate, compared to the rest of the region’s Arabs. This, of course, is incorrect. CAMERA Arabic’s complaint relates to the way the correspondence was mediated to readers, as though it specifically concerned a political/geographical entity called Palestine (a word that is completely absent from the original letters).

4) The item states: “The San Remo conference […] officially put Palestine under the British Mandate in 1920. However, before that the UK supported the establishment of a national homeland for the Jews in Palestine via “the Balfour Promise’”.

CAMERA’s complaint: This phrasing is misleading, since the 1917 Balfour Declaration was incorporated into the 1920 San Remo resolutions, mandating the UK to implement it.

CAMERA’s observations: “Simply listing two related facts” would not have included the qualifier “However” (ولكن) between them. The San Remo conference did not come in contrast to the Balfour declaration, nor did it reflect a change in British policy. Rather, the conference gave international validation to the Balfour Declaration by incorporating it into the Mandate for Palestine. The debate here is not about historical facts: it is about the misleading manner in which they are presented to the readers and other BBC items dealing with the same subject are irrelevant.

CAMERA’s complaint: The riots took place in the Galilee, Gaza and Jaffa as well.

6) The item states: “In 1929, riots broke out in Hebron and Jerusalem which caused the death of about 200 Jews and 116 Palestinians”

CAMERA’s complaint: The number of Jewish casualties was 133.

7) CAMERA’s complaint: Before 1948 at the earliest, those residing in Mandatory Palestine – Jews and Arabs alike – were considered “Palestinian” by definition. However, the article repeatedly refers only to the Arabs among them as “Palestinians”. These references are misleading and anachronistic and they contradict the way the Arabs of Palestine referred to themselves at the time (e.g. “the Higher Arab Committee”, the supreme leadership of the Palestinian Arabs at the time).

BBC response: Not everyone who resided in Palestine before 1948 was Palestinian by definition. We know for a fact about the waves of Jews who fled Europe to Palestine well before 1948. The German Jews and the Polish Jews were not Palestinians! Also, we know for a fact of the existence of the kibbutz where non-Palestinian Jews lived in Palestine at the time. Please refer again to the BBC’s timeline on Israel: (1920 – San Remo Allied Powers conference grants Palestine to Britain as a mandate, to prepare it for self-rule. European Jewish migration, which increased in the 19th century, continues.)

CAMERA’s response: The article anachronistically labels the two groups that formed the population of pre-1948 Mandatory Palestine as “Jews” and “Palestinians”. We pointed out that at the time all (lawful) residents of Mandatory Palestine, regardless of ethnicity, denomination and political belief, were Palestinians by definition (they carried Palestinian documents, and were collectively referred as such by British and outsiders alike, e.g. in sports contests and other events featuring Jewish immigrants). The BBC’s response suggests that, in contrast to the pre-1948 use of the word, it treats “Palestinian” as an ethnic category.

8) CAMERA’s complaint: The Stalin-era Soviet propaganda cartoon at the bottom of the article does not depict “a Palestinian and a Jew“, it depicts an Egyptian and an Israeli (see Russian captions).

BBC response: The caricature image is from Getty Images and the description (in English) says: “A painted cartoon image showing a grotesque John Bull representing Great Britain with a Union Jack top hat distributing weaponry to a Palestinian Jew and an Arab Moslem simultaneously. An archetypical arms-dealer arming both sides. The cartoon was produced in 1952, after the British had relinquished the Palestine Mandate precipitating a civil war”. The caption is not propaganda or misleading. The cartoon depicts accusations against Britain of fuelling a civil war in Palestine, and the sentence that preceded the cartoon says: “The Palestine-Israeli conflict is still ongoing and many blame Britain for it”. However, we have updated the Arabic wording to: “Palestinian Jew and an Arab Moslem” instead of “a Jewish and a Palestinian”, to make it more accurate and consistent.

Following a subsequent complaint submitted by CAMERA Arabic to the BBC’s Executive Complaints Unit (ECU), the cartoon referred to in point number 8 above was removed from the feature in late March 2021.