Here’s the text of a short article in the Aug. 7th Ireland print edition of the Daily Mirror titled “Protest over Palestinian man’s arrest”:

PALESTINIAN rights campaigners gathered at Leinster House yesterday to call for the release of a human rights defender.

Campaigners called on the Irish government to condemn the arrest and push for his release.

Ireland-Palestine Solidarity Campaign chair Fatin Al Tamimi said the arrest is “yet another attack by the apartheid state of Israel on those who speak out and organise against its crimes.”

Note that the piece, which reads more like a press release from a pro-Palestinian organisation than a news article in a British media outlet, informs readers that Mahmoud Nawajaa, who was arrested by the IDF last week, is a “human rights defender”.

In addition to the fact that referring to a BDS activist as a “human rights defender” is itself extremely misleading, the Daily Mirror fails to mention that his work as an activist appears to have had nothing to do with his arrest.

In fact, even pro-Palestinian outlets (like Electronic Intifada) and NGO’s have conceded that the Sin Bet “alleged that Nawajaa belonged to a “proscribed” organization, had provided services to it, and had communicated with others in order to carry out attacks”.  “Proscribed” groups typically refer to outright terror groups, or NGO’s which, in some way, are believed to provide material support for terror groups.  The fact that Electronic Intifada provides more information about the charges against Nawajaa than the Daily Mirror is extraordinary.

Here, in a 2014 Facebook post by Nawajaa, he praises Hamas’s armed wing, writing (Translation by CAMERA Arabic) “Glory to the resistance, eternity to the martyrs”.  See the snapshot below, and you can watch the Hamas military video in the FB post shared by Nawajaa here. 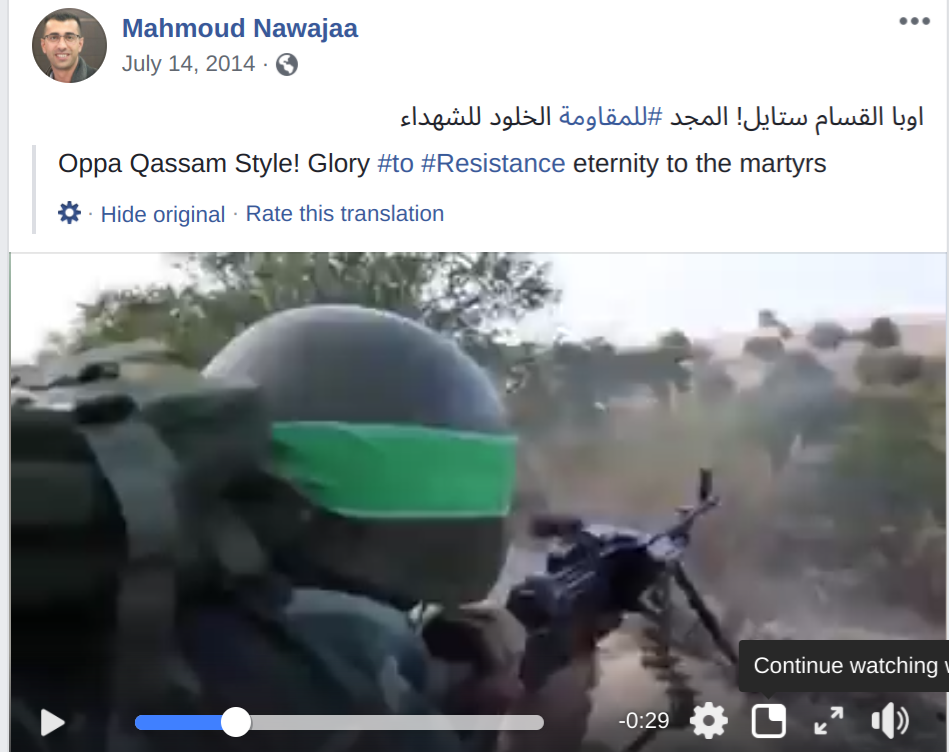 Also on Facebook, he glorified Ashraf Na’alwa, the terrorist who, in 2018, opened fire on several Israelis in the Barkan Industrial Park, killing two and critically injuring another.

The Palestinian “human rights defender” also shared an antisemitic podcast on his Facebook page shared, titled, “About the struggle in America against Zionism”: 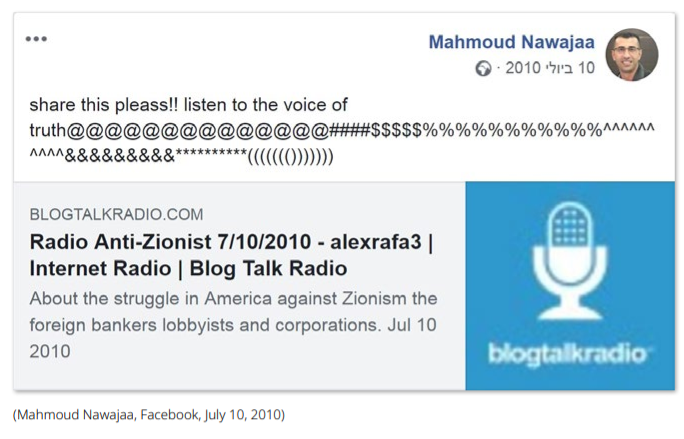 The episode he shared reportedly compares Israeli policies in Gaza to that of the Nazi “Final Solution”, accuses Zionists of “brainwashing” and controlling U.S. policy, suggests that the U.S. supports Israel because of the “influence of the financial district”.

We believe that Daily Mirror’s promotion of Nawajaa’s cause, especially their characterisation of him as a “human rights defender” without mentioning the charges against him or his support for terror, violates the accuracy clause of the editors code.

We’ve lodged a complaint with editors.