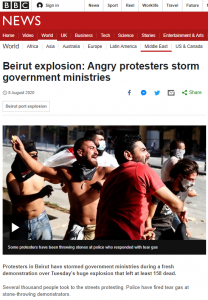 “Crowds estimated at between 5,000 and 10,000 gathered for the protest on Saturday, including a march from one of the most devastated areas near the port to Martyrs’ Square. […]

As the protests got under way, mock gallows were erected in Martyrs’ Square to hammer home the demonstrators’ view of the country’s political leaders.”

A similar statement was found in the synopsis to a video report published on the website the following day under the headline “Beirut explosion: Anger boils over in Beirut protests”.

“Protesters set up make-shift gallows, with the message “resign or hang” for government officials.”

However in addition to “government officials” and “political leaders”, the protesters also had a message for the head of the country’s dominant terrorist organisation, Hassan Nasrallah.

“Protesters hanged an effigy of the Hezbollah leader during protests Saturday. […]

Protesters hanged effigies of not only the Hezbollah leader but also President Michel Aoun and Nabih Berri, a politician and Speaker of Parliament.”

“The country is also going through the worst economic crisis since the 1975-1990 civil war, and tensions were already high with street demonstrations against the government.

Many blame the ruling elite who have dominated politics for years and amassed their own wealth while failing to carry out the sweeping reforms necessary to solve the country’s problems.” (source)

“Many blamed the ruling elite who have dominated politics for years and amassed their own wealth while failing to carry out the sweeping reforms necessary to solve the country’s problems.” (source)

“Many blame the ruling elite, who have dominated politics for years. People have to deal with daily power cuts, a lack of safe drinking water and limited public healthcare.” (source)

“Many Lebanese have been unimpressed by the government’s promises of transparency and accountability. They see the investigation as an attempt by a political elite accused of corruption, neglect and mismanagement to dodge blame for the disaster.” (source)

“The decision to keep so much hazardous material in a warehouse near the city centre has been met with disbelief by many Lebanese, who have long accused the political elite of corruption, neglect and mismanagement.” (source)

However BBC audiences were not provided with any details concerning that “political elite”, including the make-up of the current cabinet which was described on the same website in January as being “composed primarily of advisers and appointees representing the main political oligarchs and parties allied with Hezbollah”.

As explained by Dr Jonathan Spyer shortly before the Beirut explosion:

“Hizballah is today the dominant force in Lebanese public life. The bloc of which it is a part holds a majority in the 128 member parliament, and a majority in the Cabinet. Prime Minister Hassan Diab is its obedient servant.

This means that the profound economic crisis currently gripping the country falls squarely in Hizballah’s lap.  It is required to operate and to make decisions as a governing force, responsible for the avoidance of general socio-economic collapse which is now a real possibility in Lebanon. […]

The problem is that Lebanese Hizballah is not only or primarily a successful local political actor. Rather, it is a franchise of Iran’s Islamic Revolutionary Guards Corps (IRGC). Indeed, its local political predominance is a direct function of the outsize strength and capacity afforded it in the Lebanese context by Iranian support.”

Nevertheless, the few references to Hizballah which have appeared throughout the first six days of BBC coverage of the disaster in Beirut downplay its role and – notably – uniformly exclude the words terror, terrorism or terrorist.

“It is this religious diversity that makes the country an easy target for interference by external powers, as seen with Iran’s backing of the Shia Hezbollah movement, widely seen as the most powerful military and political group in Lebanon.” (source)

“And Lebanon’s stability hasn’t been helped by the Shia militant group Hezbollah, which is backed by Iran and by Syria. It’s part of the government and it’s in constant tension with Israel and the West. So the West wasn’t going to rush in when the economic bubble burst.” (source)

“The leader of the militant Hezbollah movement, Hassan Nasrallah, also denied allegations that it had stored weapons or ammunition at the port. […]

Hezbollah leader Hassan Nasrallah, Mr Aoun’s political ally, meanwhile denied any responsibility for the blast, insisting that his group did not control the port and that it had stored no weapons or ammunition there.

BBC Middle East analyst Sebastian Usher says Mr Nasrallah’s denial is necessary because many Lebanese believe the exact opposite – he needs to shore up his position and that of his movement, which still wields decisive power in Lebanon.” (source)

For years BBC reporting on Hizballah has downplayed its designation as a terrorist organisation and whitewashed its role in destabilising Lebanon. It is therefore unsurprising that even such a simple topic as public anger at the leader of Hizballah has gone unreported and audiences have to search reams of BBC coverage of the Beirut port explosion for euphemistic references to the relevant fact that a foreign sponsored, internationally active, terrorist organisation calls the shots in that country.

Like Loading...
Tags from the story
BBC, BBC News, BBC Online, Beirut, Hassan Nasrallah, Hizballah, Lebanon, Omission, Terrorism
Written By
Hadar Sela
More from Hadar Sela
It would appear that Melvyn Bragg is making a documentary about the...
Read More