In the wake of last week’s disaster in Beirut, on August 10th the BBC’s Middle East editor offered his 187.6 thousand Twitter followers a “guide” to the Middle East in the form of an episode from his 2017 BBC Radio 4 series ‘Our Man in the Middle East’ which was relaunched by the BBC earlier this year and some episodes of which have been discussed here in the past. 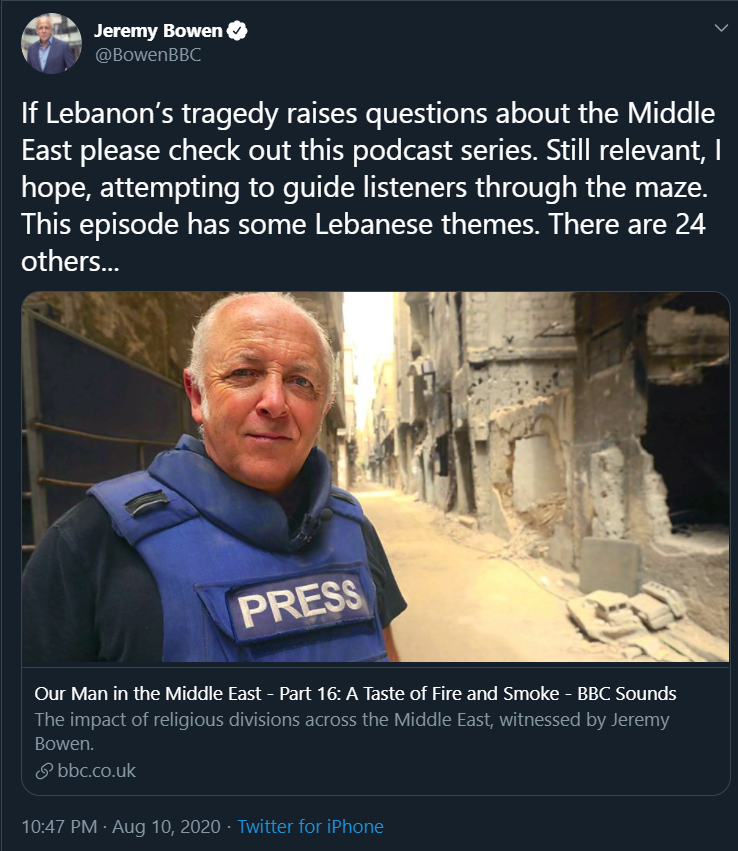 So what sort of answers to their “questions about the Middle East” do listeners get from that promoted episode? One example comes at 02:13 when Bowen tells listeners:

“In 2008 I saw how fighting could sweep through the mountains above Beirut like a forest fire, driven on by the hot wind of sectarian hate. Lebanon’s power sharing system had broken down and different sects were reaching for their guns. Lebanon’s leaders were mostly warlords turned politicians. They knew how hard it is to stop a civil war once it’s started. That time they contained the making of a new one within a week.” [emphasis added]

The events described so opaquely by Bowen began in early May 2008 after the Lebanese government of the day discovered that Hizballah had a secret fibre-optic communications network allegedly financed by the ‘Iranian Fund for the Reconstruction of Lebanon’.

“The government called for Hizbullah’s secure phone and internet system – fibreoptic cables separate from the Lebanese state network – to be dismantled.

It also protested about concealed surveillance cameras found at Beirut airport and sacked an army general in charge of security who was described as sympathetic to the Iranian-backed group.

In a televised news conference, Nasrallah warned that the demands were “tantamount to a declaration of war … on the resistance and its weapons in the interests of America and Israel”.

Hizbullah would “cut off the hands” of anyone who tried to touch its arsenal, Nasrallah said…”

The Guardian pointed out that:

“The group [Hizballah] was supposed to have disarmed under the UN resolution that ended the 2006 war with Israel.

Not only has it failed to do so, but it is also reported to have replenished its arsenal.”

“Lebanon’s Iranian-backed Hezbollah group took control of the Muslim half of Beirut on Friday in what the U.S.-backed governing coalition called “an armed and bloody coup”. […]

At least 18 people have been killed and 38 wounded in three days of battles between pro-government gunmen and fighters loyal to Hezbollah, a Shi’ite movement with a powerful guerrilla army.”

As reported by the LA Times:

Beirut’s international airport remained closed. Lebanese and foreigners fled the prospect of more fighting by heading across the Syrian border.”

The violence spread to “the mountains above Beirut” mentioned by Bowen and the death toll rose.

“Nearly one hundred Lebanese were killed and 250 were wounded in the worst fighting since the country’s fifteen-year civil war that ended in 1991. After three days of fighting – which included Hizballah’s failed attempt to storm the Shouf mountain preserve of March 14 Druze leader Walid Jumblatt – the Lebanese Armed Forces (LAF) stepped in and enforced a de-escalation. However, in the face of Hizballah’s overwhelming military might, and the LAF’s unwillingness to protect national institutions, Prime Minister Fouad Siniora and his coalition capitulated to Hizballah’s demands on May 14, and revoked the cabinet decisions. This constituted a humiliation for the already weak Lebanese government.”

As noted by David Schenker at WINEP:

“While the military operation demonstrated Hizballah’s planning and operational experience, the militia’s reputation was also severely diminished. By turning the arms of “the resistance” against its fellow countrymen – something the militia swore it would never do – Hizballah effectively undercut its regional and local legitimacy. It also ended the longstanding fiction that the Shiite party was committed to Lebanese democracy.”

That chapter in Lebanon’s turbulent history concluded later the same month with the Doha Agreement which was described as follows by the New York Times:

“The agreement reached by Lebanese political factions early Wednesday amounted to a significant shift of power in favor of the militant Shiite group Hezbollah and its allies in the opposition, who won the power to veto any cabinet decision.

The sweeping deal to form a new government promised an end to 18 months of political deadlock here, and underscored the rising power of Iran and Syria, which have backed Hezbollah in a proxy battle against the governing coalition and its American and Saudi allies.

Government leaders said they had given way on major provisions because they felt the alternative to an agreement was war. They also said they won a pledge that no faction would use its weapons internally, as Hezbollah and its allies did during street battles this month in the worst internal fighting since Lebanon’s 15-year civil war.

“We avoided civil war,” said Walid Jumblatt, a leader of the governing coalition. He added that the agreement called for a future dialogue on weapons, a clause that he and other government leaders hoped would eventually allow them to raise the issue of Hezbollah’s arsenal.”

Hizballah’s arsenal – and influence – has of course only grown in the twelve years since that bloody week in 2008 and that long-standing issue remains relevant background to many of the Middle East events reported by the BBC such as Israeli strikes against Iranian targets in Syria, cross-border tensions between Israel and Hizballah and the Beirut port disaster.

Remarkably – despite BBC News having covered the events of May 2008 and the subsequent agreement – the BBC News website’s Lebanon profile timeline makes no mention of them.

Jeremy Bowen’s evasive account of the violent take-over of parts of Beirut twelve years ago by Hizballah obviously does little to “answer questions about the Middle East” or enhance understanding of the complicated context to the story of the Beirut port explosion because, as we have already seen in coverage of that event, the BBC continues to tiptoe around the issue of the widely designated terrorist and criminal organisation which wields so much military and political power in Lebanon.

BBC ME EDITOR SHOEHORNS ISRAEL INTO COVERAGE OF BEIRUT DISASTER