BBC News website coverage of the explosion in Beirut last week has included the following reports:

August 5th: Beirut explosion: What is ammonium nitrate and how dangerous is it? by Tom Edgington. 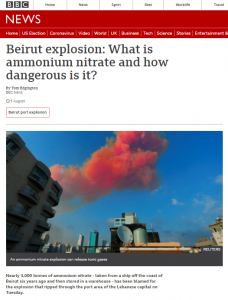 “Nearly 3,000 tonnes of ammonium nitrate – taken from a ship off the coast of Beirut six years ago and then stored in a warehouse – has been blamed for the explosion that ripped through the port area of the Lebanese capital on Tuesday.

But what is ammonium nitrate and why can it be so dangerous?”

Under the heading “Is it used in bombs?” readers are told that “It has also been used in several terrorist acts, including the Oklahoma City bombing in 1995.”

“Following the destruction caused by ammonium nitrate exploding at Beirut’s port, there are concerns globally about its storage.

The chemical is widely used around the world, as a fertiliser or for explosives in mining.

But there are strict regulations about where it can be kept and for how long.

And its location is often kept secret because of its potential for making bombs.”

August 12th: Beirut blast: The other countries with dangerous dumps of explosives by Frank Gardner.

“The devastating explosion in Beirut is a grim reminder of a deeply troubling fact: the thousands of tonnes of ammonium nitrate unsafely stored in that city’s port is not the only site at risk of spontaneous detonation.”

The article presents examples from the Philippines, Guinea-Bissau, Libya, Ukraine and Abkhazia.

“Munitions experts are now hoping that if anything positive can possibly come out of the tragedy in Beirut, it will be a renewed global urgency to make these stockpiles safe, before it is too late.”

Remarkably, none of those reports makes any mention of cases in which Hizballah was found to have stored ammonium nitrate in countries including Thailand (which the BBC did report), Cyprus, the United Kingdom and most recently Germany (which the BBC did not report). 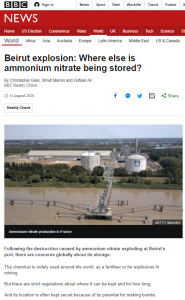 “In September 2015, thanks to a tip-off from a foreign government, reportedly Israel, police and intelligence agents in London raided four properties and uncovered three metric tones of the explosive agent ammonium nitrate contained in thousands of ice packs. This raid was done under wraps, didn’t involve any prosecutions, and was kept secret for years. The Hezbollah cell that stockpiled these ice packs in London was part of a much broader Hezbollah operation to hideaway ammonium nitrate ice packs and other explosive materials in strategic locations all over the world and is closely connected with previously reported plots from Thailand to Cyprus.

A further storehouse filled with approximately four tones of explosive agents, including ammonium nitrate, presumably in ice packs, was raided by Thai police after their arrest of the Hezbollah agent Hussein Atris in January 2012. Atris claimed the explosives were not for use in Thailand, and the National Police chief said they were found in shipping crates for export to other countries and that the cache had been hidden there for at least a year.

In October 2014, Hezbollah operative Muhammad Amadar was arrested in Peru with explosives, having been caught scoping out local Jewish and Israeli, targets. The explosives found in Amadar’s house probably were transferred from the Thailand storage. A similar plot was disrupted in Bolivia around 2015, and a Saudi paper reported in 2017 that Bolivian police foiled a would-be Hezbollah plot to conduct large attacks against tourists in Bolivia, Peru, and Chile.

A discovery of 8.2 tons of ammonium nitrate ice packs in Cyprus in 2015 and the arrest and subsequent conviction of Hussein Bassam Abdallah as a Hezbollah agent planning attacks on Israeli or Jewish targets in the country showed that Cyprus was also the “point of export” for other planned attacks throughout Europe, including possibly for the bombing of an Israeli tourist bus in Burgas, Bulgaria, in 2012. The Cyprus stockpile had been stashed there since at least 2011, which was likely true of the 2015 London find as well.”

Nevertheless, none of these three BBC articles about “dumps of explosives” and ammonium nitrate storage – published, as their headlines indicate, as part of the corporation’s Beirut explosion coverage – made any effort to inform BBC audiences of the penchant for stockpiling that chemical in foreign countries displayed by the terrorist organisation with a stronghold in that city.

HIZBALLAH LONDON EXPLOSIVES STORY NOT NEWSWORTHY FOR THE BBC