On March 31st the BBC News website published an article by Jonathan Marcus titled “Coronavirus: A ticking time-bomb for the Middle East”. 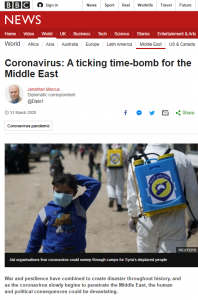 “…the closure of the courts has delayed the corruption trial of Prime Minister Netanyahu, who looks like soldiering on in office.”

“…the courts in Israel have not been closed. Activity has been reduced in line with Ministry of Health instructions and the Judiciary’s website states:

‘The courts and employment tribunals will function under emergency measures whereby only urgent hearings will be held.’”

CAMERA UK made a complaint to the BBC on that issue, pointing out that the claim that courts in Israel had been closed is inaccurate and misleading.

On April 14th we received a response from BBC Complaints informing us of a delay to their response. On May 11th BBC Complaints contacted us stating that they had not been able to respond to the complaint “within the time period we aim for” and informing us that we could refer the issue to OFCOM – which we did the following day. No response was received.

On August 14th we received the following from the BBC News website:

“Thank you for getting in touch about our article Coronavirus: A ticking time-bomb for the Middle East.

It appears you never received a response to your complaint, submitted in early April, and we’d like to our sincere apologies for the very long and regrettable delay in writing back to you.

After considering your point we have amended the article’s penultimate paragraph to include the caveat: (apart from a few exemptions).

We consider this a minor change, which does not warrant a note of correction.”

While that very belated five-word amendment is obviously welcome, it clearly does not adequately rectify the misinformation promoted to BBC audiences four and a half months ago.

THE BBC, CORONAVIRUS AND POPULATION DENSITY