As documented here earlier, BBC reporting on the announcement concerning the normalisation of relations between Israel and the United Arab Emirates promoted repeated inaccurate claims. An additional inaccuracy was heard by listeners to BBC Radio 4’s ‘Today’ programme on August 14th in a report (from 11:15 here) by the BBC Jerusalem bureau’s Yolande Knell.

In her introduction to that report presenter Sarah Smith once again promoted the notion that Israel has “plans to annex” parts of Area C despite the fact that no such plan has yet been approved by the cabinet, the Foreign Affairs and Defense committee and the Knesset. [emphasis in italics in the original, emphasis in bold added]

Smith: “Israel and the United Arab Emirates have reached a deal to normalise relations, with Israel agreeing to suspend its controversial plans to annex parts of the occupied West Bank. Donald Trump has called the accord a breakthrough towards peace. Yolande Knell is our Middle East correspondent. […] Ehm…what happened to make this deal happen now? Why has this been agreed at this point?”

Yolande Knell further fuelled the myth that Israel has such a “plan” rather than informing audiences of the actual state of affairs which is that while some Israeli politicians may indeed have such intentions, no “plans” have been approved by Israel’s parliament as yet and so they are not currently Israeli policy.

Knell: “Well according to Jared Kushner – the senior advisor to Donald Trump and his son-in-law of course – who worked on the ‘deal of the century’ peace plan for peace between Israel and the Palestinians that we widely thought had been shelved for now, they said that they spotted a window of opportunity for a diplomatic win six weeks or so ago. Ahm…that’s when Israel was expected to press ahead with that plan to annex large parts of the West Bank; that very controversial move that many said would completely prevent any chance of peace with the Palestinians.”

Later in the item Smith observed that:

Smith: “And it [the Israel-UAE agreement] has been broadly welcomed around the world but not by the Palestinians, who’ve described it as treason.”

Knell: “That’s right. Palestinian leaders in the West Bank are going to meet to discuss this later. They’ve already rejected this deal. They’ve described it as a free reward for Israel. Hamas, the Islamist militant group in Gaza, has also had some strong words against this agreement and offered to work with Ramallah to oppose it. Because of course previous peace plans, including the breakthrough Oslo Accords, promised that Israel would get full diplomatic ties with those wealthy, powerful Arab Gulf countries – Arab countries in general – only in exchange for peace with the Palestinians. Ahm…and that would be on the terms of a two-state solution that would see an independent Palestinian state set up alongside Israel. Ahm…that’s something that came out also in the Saudi-led Arab peace initiative.”

Neither of the agreements known as Oslo I and Oslo II – to which no Arab country was party – conditioned diplomatic ties with Arab states on “peace with the Palestinians” as erroneously claimed by Knell.

Neither – as we have unfortunately had cause to note here in recent weeks due to the BBC’s repeated promotion of that falsehood – did the Oslo Accords make any mention of the two-state solution. Not only has the BBC failed to respond to our complaints on that issue, but it continues to promote that inaccurate claim.

The 2002 Saudi initiative – which later morphed into the Arab peace initiative – did indeed propose normalisation of ties between Israel and Arab countries in return for various conditions including the ‘return’ of Palestinians to Israel. However Israel did not accept those conditions, describing the proposal – as the BBC itself reported at the time –  as a “non-starter”.

So why did Yolande Knell promote the inaccurate notion that there is relevance to the terms of the Saudi initiative even though one party to the conflict never accepted them? A clue to that can be found in a report written by Knell in 2018 in which she gave amplification to the PLO stance:

“”This kind of attempt to normalise Israel within the region, without Israel normalising its relationship with Palestine and remaining as an occupying power, is counterproductive and dangerous,” says Hanan Ashrawi, a senior Palestine Liberation Organisation (PLO) official.

She suggests the latest developments threaten the legitimacy of the Arab Peace Initiative – which the 22 members of the Arab League signed up to in 2002.

It offers Israel normal diplomatic relations with Arab states only in exchange for its full withdrawal from Arab lands it captured and occupied in the 1967 Middle East War.”

While Knell has now taken that amplification even further by falsely claiming that the Oslo Accords included the same condition, she was not the only BBC journalist to promote the unilateral Saudi peace initiative as some kind of authority.

Viewers of the BBC News channel were told by Barbara Plett Usher (from 03:30 here) on August 13th that:

Plett Usher: “…this is a really big breakthrough for Israel. This is the way they want to do it: to have those peace agreements state by state rather than resolving their conflict with the Palestinians first and then having a regional peace, which has been the framework until now.”

Plett Usher told viewers of ‘Outside Source’ on the same TV channel on the same day (from 03:55 here) that:

Plett Usher: “This upends the collective regional arrangement for peace. So since the Jordan peace treaty in 1994 there’s been an agreement that there wouldn’t be any further normalisation until there was peace with the Palestinians and until they had an independent state and they don’t have that and yet the UAE has gone ahead with this agreement. So the Palestinians feel angry, betrayed, stabbed in the back; that sort of thing.”

The Saudi proposal of course came into being eight years after the signing of agreements between Israel and Jordan and Plett Usher failed to clarify its unilateral nature.

Knell: “But the Palestinians feel betrayed. Past peace plans [plural] promised diplomatic relations with powerful Arab states only when their conflict with Israel had been solved.” 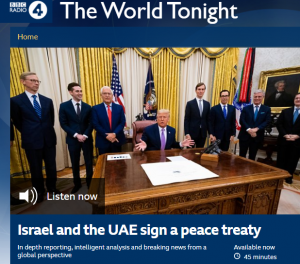 Knell: “In the past it was always said that further normalisation between Israel and other Middle Eastern countries could only come when there was peace with the Palestinians, including the creation of an independent Palestinian state.”

Listeners to the August 13th edition of BBC Radio 4’s ‘The Word Tonight’ heard the same claim from Knell in the news bulletin in that programme (from 02:42 here).

Despite the BBC’s portrayal, the Saudi initiative was never a “regional arrangement for peace” or “the framework” or one of the “past peace plans”. It was a proposal from one side which did not progress (not least because it did not allow for negotiations and was presented on a ‘take it or leave it’ basis) which can at most be described as a consensus at the time among the majority of members of the Arab League.

The fact that the BBC is now presenting an inflated portrayal of that document as though it has some sort of official standing (while failing to inform audiences that its revised version was rejected by Hamas and Hizballah) indicates the extent to which some BBC reporters have adopted the PLO’s narrative.

HOW DID THE BBC’S YOLANDE KNELL FRAME ISRAELI VISITS TO GULF STATES?

BBC NEWS SILENT ON THE PA’S REFUSAL OF CORONAVIRUS AID