On July 1st, as the BBC was busy promoting the narrative that extension of Israeli sovereignty to parts of Area C was just around the corner, the BBC Arabic website published a backgrounder titled “Israeli settlements in the West Bank – what do you know about them? And why were they born?”. 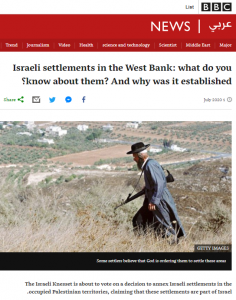 The backgrounder included the five different errors and inaccuracies listed below and CAMERA Arabic submitted a complaint to the BBC on the day of its publication. To date, over seven weeks later, we have still not received a response and the backgrounder has not been properly corrected.

(all translations are by CAMERA Arabic)

1) “Israeli Knesset is about to vote on a decision to annex the Israeli settlements […]”.

The situation at the time was that a proposal to apply Israeli civilian law to some settlements (which ones is unclear) could have been brought to the cabinet from July 1st. If approved, it would then have had to be presented to the Knesset Foreign Affairs and Defense committee and then to the Knesset plenum.

2) “[…] built on the Occupied Palestinian Territories”.

According to the BBC Academy style guide the term Palestinian territories refers to “the areas that fall under the administration of the Palestinian Authority”. The PA does not administer any part of Area C, which is where all the Israeli communities are located

3) “Most UN member states, alongside the EU, say that building Israeli settlements in the occupied West Bank is considered a breach of the international law. The US used to hold this position, at least officially.”

This is a misleading statement since the last time the US officially held that position was almost four decades ago. Although more recent American officials described settlements as “illegitimate” and an”obstacle for peace”, international law was never mentioned by post-Carter US administrations when they addressed the issue.

4) “Currently, the Israeli settler woman has more than 7 children on average”.

This statement, along with a related chart, is based on a repeated misquote, falsely attributed to sociologist Yinon Cohen. Cohen’s research (as displayed in a graphic summary on his Columbia website) indicates that among residents of Judea & Samaria, only ultra-orthodox women have that fertility rate, while women as a whole (of all levels of Jewish observance) have 5.1 children on average. Cohen refers to the Statistical Abstract of Israel 2012 as his source for this last number; the 2019 Abstract provides a lower number of 4.9.

5) In the legend of the map sourced from the political NGO B’tselem the broken red line represents the ‘West Bank barrier’ which is “projected/under construction” rather than the “settlements” as claimed by BBC Arabic. The same error was already spotted by CAMERA Arabic in a translated English item published four days prior: see our report here.