When the announcement concerning the normalisation of relations between Israel and the United Arab Emirates was made on August 13th the BBC News channel programme ‘Outside Source’ – which describes itself as “the programme that gathers the latest information as it arrives from news wires, video feeds and social media on the biggest stories of the day” –  found it appropriate to explain that story to audiences by means of an interview with just one outside contributor.

Notably, the programme’s producers chose to interview a person who is not from either of those countries and had no involvement in the announcement. Given that Diana Buttu is a fairly frequent contributor to BBC content despite her history of promoting falsehoods in the media, her talking points could not have come as much of a surprise to whoever solicited the interview and yet they went completely unchallenged by presenter Philippa Thomas (from 01:40 here). 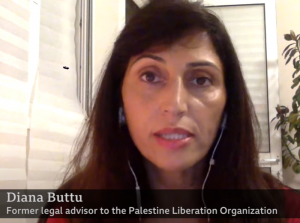 Thomas: “White House officials say that as part of the agreement Israel has agreed to suspend applying sovereignty to parts of the occupied West Bank that it had considered annexing. Diana Buttu is a lawyer and she’s a former legal advisor to the Palestine Liberation Organisation. We asked her about this.”

Buttu: “Look, I think it’s important to keep in mind that there have been two processes of annexation; the formal one and the informal process. The informal process has gone on for 53 years and that has included the confiscation of Palestinian land – the theft of Palestinian land – building of Israeli-only infrastructure on that land, creation of an apartheid system and denial of freedom to Palestinians. The formal annexation was the part that was supposed to happen in July and that’s the only part that’s going to be stopped. But I can guarantee you that tomorrow there will be more settlements that will be built, there will remain an apartheid system in place. Palestinians will be denied freedom and we will forever be living under a system of…in which we are denied our basic human rights.”

In other words, Buttu was given a BBC platform from which to promote – unquestioned and unchallenged – notions such as “the theft of Palestinian land” and the gratuitous “apartheid” smear which is used by anti-Israel propagandists such as herself as part of their delegitimisation campaign.

Moreover, not only was Buttu’s propaganda presented without challenge from Thomas, but it was given credence by two subsequently interviewed BBC journalists.

“It [the UAE] said it has made this agreement in order to stop annexation and that it will continue to push for an independent [Palestinian] state. But as you were hearing there from Diana Buttu, that’s kind of an empty promise as far as the Palestinians are concerned because according to the terms of the Trump peace vision ah…the terms are that this would cement Israel’s control over large parts of the West Bank and it would basically keep the Palestinians in their disconnected enclaves so they have already rejected that as well.”

“…just as you were hearing…were hearing there about the situation in the Palestinian territories, essentially contrast between the formal and the informal but essentially there’s a status quo either way.”

According to the BBC Academy’s style guide the phrase “Palestinian territories” refers to “the areas that fall under the administration of the Palestinian Authority” and so Usher’s rubber stamp for Buttu’s allegation of “formal” and “informal” ‘annexation’ in those areas is obviously misleading to viewers.

The BBC’s contract with its funding public – the Royal Charter – states that the object of the corporation is “the fulfilment of its Mission and the promotion of its Public Purposes”.

The first of the BBC’s five public purposes is “[t]o provide impartial news and information to help people understand and engage with the world around them”. The unchallenged promotion of a known political activist’s entirely predictable propaganda and redundant tropes clearly does not contribute to meeting that obligation.

THE BBC AND THE ‘APARTHEID’ SMEAR

BBC RADIO BACKTRACKS ON NON-STARTER STORY IT PROMOTED FOR WEEKS