Last month we noted that the BBC News website had completely ignored news of the resignation of a senior official at a prominent UK charity following exposure of his social media posts promoting antisemitism and supporting Hamas, along with the opening of a related investigation by the Charity Commission:

Last weekend the Times – which exposed those posts in July – reported (£) that another trustee at Islamic Relief Worldwide – Almoutaz Tayara – had also been found to have posted messages supporting Hamas and consequently the charity’s entire board was due to resign.

Once again we have to date been unable to find any reporting on that story on the BBC News website, including on its ‘Charity Commission’ page and ‘Charities’ page but the story was featured in the August 24th edition of BBC Radio 4’s “ethical and religious issues” programme ‘Sunday’. 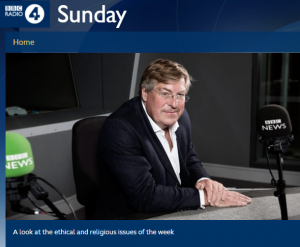 Presenter William Crawley introduced the item (from 36:32 here) as follows: [emphasis in italics in the original]

Crawley: “The entire board of trustees of the charity Islamic Relief Worldwide has stood down in the wake of revelations that two of them had shared extremist antisemitic comments on social media. Following an internal review of their governance, a new board was elected yesterday with none of the previous board members standing for election. Dr Lorenzo Vidino is the director of the programme on extremism at George Washington University. He uncovered the social media posts and he spoke earlier to Rosie Dawson.”

Vidino: “I think it’s pretty clear that some of its leaders historically and today have sympathies for groups like the Brotherhood or Hamas.”

Nevertheless, Crawley continued to focus audience attentions on the antisemitic aspect of some of the social media posts by the two trustees but avoided the issue of their support for a terrorist organisation proscribed by the UK.

Cottingham: “Well I’m well aware of Dr Mess…Vidino’s views and I do want to say something about those but I also want to put the reaction of our trustees in the context of what this is all about. What this is about is Islamophobia…is ahm…antisemitism. Antisemitism – let’s be clear about this – it’s hate speech, it’s discrimination on the grounds of religion, it’s morally wrong, it’s profoundly damaging and it needs to be challenged and it needs to be tackled. Like Islamophobia, it goes against the grain of all the three major Abrahamic faiths because in all those faiths – and I’m a Christian working for Islamic Relief, a Muslim organisation – in all of those three faiths there is a fundamental belief that everyone is created equal under God and that every individual is precious and loved by God. So that’s why I want to say on behalf of Islamic Relief that we are profoundly sorry that these comments were made by two of our trustees – now former trustees – and that hints at the action that we’ve taken. What these two individuals said was offensive. It was completely unacceptable. It was shameful. And that’s why now the board of Islamic Relief has acted swiftly and decisively to ensure that these two individuals will play no further part in the future governance of our organisation. But there is some important additional information here because…”

While the antisemitic nature of some of the posts is obviously relevant, so is the fact that both those senior officials at IRW expressed support for Hamas. As reported by the Times of Israel:

“Islamic Relief Worldwide trustee and director, Almoutaz Tayara […] has described the leaders of Hamas terror group as “great men” who were answering the “divine and holy call of the Muslim Brotherhood.”

“The al-Qassem heroes did not graduate from the military academies of the UK and the US, unlike the rulers and royals of the Arab world who, there, were nurtured on cowardice and allegiance to the foreigners — the UK and the US,” Tayara wrote, referring to the Hamas military wing.”

Crawley [interrupts]: “Alright. I want to give you a chance to say all of that but let me just explore this a bit further with you, because there are still questions about how they got there in the first place. What kind of vetting system do you have in place? Was this a failure at your governance level that people with those views and expressing those views were able to be on the board of trustees?”

Cottingham: “Well I think precisely what happened…what happened needs describing to understand this. These were historical posts on social media, personal profiles, in 2014 and 2015…”

Crawley [interrupts]: “Not a very long time ago, was it?”

Cottingham: “…in both cases before they were on the board of Islamic relief Worldwide. In both cases those individuals came to regret their comments and closed their Facebook accounts. And in both cases Islamic Relief Worldwide didn’t know about those comments or those posts until the last few weeks when they were highlighted by the media. Ahm…”

Radio 4 listeners were not informed that the author of the second batch of offensive social media posts, Almoutaz Tayara, had in fact replaced the author of the first batch, Heshmat Khalifa. The Times reported that:

“Heshmat Khalifa resigned his IRW directorship last month after The Times revealed antisemitic posts in which he called Israelis the “grandchildren of monkeys and pigs” and Egypt’s president a “pimp son of the Jews”. He was also forced to step down as the director of an international endowment fund with a £7 million portfolio that is wholly controlled by the charity. His place on its board was taken by another IRW trustee and director, Almoutaz Tayara.”

Neither were audiences told the German branch of IRW – which Tayara headed – had, as noted by the Times, been aware of his offensive posts for three years.

“His posts were written in 2014 and 2015. They were initially discovered by a German researcher, Sigrid Herrmann-Marschall, who published them in a 2017 blog post.

Islamic Relief Germany admitted that it had known of Dr Tayara’s posts since 2017 but allowed him to continue as its chairman after he apologised, deleted the posts and closed his Facebook account. […]

Islamic Relief Germany said that when it became aware of Dr Tayara’s comments in 2017, it was “shocked by the anti-western and anti-Israel content of the posts partially glorifying violence and terrorism”. He had, however, given “outstanding support” to the charity for more than a decade.”

Crawley: “Now you’ve mentioned Doc…you’ve mentioned Dr Vidino and you say you want to challenge some of his views. I want to give you a chance to do that too Martin but let’s be clear; it’s not just a case of these are his views. Last year German authorities raised concerns about alleged links between your organisation and the Muslim Brotherhood. The United Arab Emirates have done the same. Israel has banned you alleging that you’ve helped fund Hamas – something I know you’ve been challenging in the courts – and now we’ve got this latest controversy around antisemitism and racism. Many reasonable people surely may be asking what is going on in your organisation.”

Cottingham: “You’re asking reasonable questions. There are a lot of questions about a lot of areas. I want to finish first saying what happened with these trustees because as soon as our board of trustees knew about these posts they had emergency meetings they same way…the same day and they took swift and decisive action and as a result, neither of those two individuals will play any future part in our governance.”

Cottingham: “Ahm well if you listen to Dr Vidino, his is one view among many and he is someone who…he aspires to have expertise about organisations like Islamic Relief but I think it’s important to say, he’s never once reached out, to our knowledge, to engage with us at first hand and find out who we are and what we do.”

Crawley then asked what should have been the key question in this interview:

Crawley: “What is the relationship between your organisation and the Muslim Brotherhood?”

Cottingham: “There is no relationship, pure and simple. No external organisation influences or controls Islamic Relief and that includes the Muslim Brotherhood. Now ehm…the view of Dr Vidino is not the view of dozens of organisations and institutions that work in partnership with Islamic Relief who really do know our work at first hand.”

Crawley: “I know but again I make the point – and Dr Vidino is not here – but I make the point, Martin, it’s not just his view. You’ve got whole countries have expressed this view: Germany, the United Arab Emirates have put you on their list of proscribed organisations. There are serious concerns about the credibility of the organisation. Surely you accept that don’t you? That’s a reasonable concern given what’s happened.”

While Islamic Relief Worldwide has been proscribed by the UAE and banned from operating in Israel, contrary to the claim from Crawley, Germany does not appear to have proscribed the charity but has stated that it has “significant ties” to the Muslim Brotherhood or its affiliated organisations.

Cottingham: “The question you’re asking is a reasonable question but what I’m saying is that there are dozens of governments, UN organisations, Christian, Jewish and secular organisations, that have worked with Islamic Relief for many years and value our work and don’t recognise us as the kind of organisation that Dr Vidino is suggesting…”

Cottingham: “…we are. Now in the case of Israel and the UAE, we categorically deny the allegations that they’re making that we are a terrorist…a terrorist organisation or a terrorist funder…”

Crawley: “We have to leave it there. I’m so sorry Martin but thank you very much. Martin Cottingham from Islamic Relief Worldwide.”

Clearly Crawley failed to adequately challenge the talking points made by his IRW interviewee and so BBC Radio 4 audiences did not receive a clear enough picture of either the story concerning the social media posts or the wider issue of the UK based charity’s links to the Muslim Brotherhood.

Earlier this year the expert briefly interviewed at the beginning of this item and repeatedly referred to by Cottingham and Crawley published his interviews with Kamal Helbawy (described as “a legendary figure in Islamist circles for more than 60 years and one of the most senior members of the Brotherhood to have ever operated in the West”) who told Dr Vidino (page 17 here) that:

‘“[IRW’s] leadership,” explains Helbawy, “are Brotherhood, but the people who contact [donors] for donations are not necessarily even Muslims; they can be Christians, and Jews, and whatever.” Essentially, Helbawy argues that organizations like IRW are funded and run at the senior leadership level by Brotherhood members. In the case of IRW the clear links between the charitable organization and the Brotherhood include one of IRW’s cofounders, Essam el Haddad, a senior Egyptian Brotherhood official who served as President Mohamed Morsi’s assistant for foreign relations and international cooperation. But, argues Helbawy, most of the people who work for IRW, even in senior positions, are not members of the Brotherhood and in most cases have no idea of —and would even strongly and sincerely deny – IRW’s links to the Brotherhood.’

That appears to be exactly what BBC Radio 4 listeners heard in this superficial item.