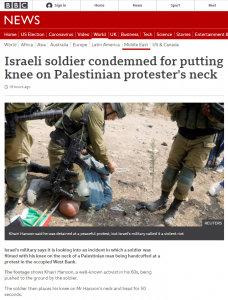 As in that headline, the word “neck” was also twice employed in the report’s opening paragraphs:

“Israel’s military says it is looking into an incident in which a soldier was filmed with his knee on the neck of a Palestinian man being handcuffed at a protest in the occupied West Bank.

The footage shows Khairi Hanoon, a well-known activist in his 60s, being pushed to the ground by the soldier.

The soldier then places his knee on Mr Hanoon’s neck and head for 50 seconds.”

Readers were not given any further information regarding the activities of the man described as “a well-known activist” despite some details being available in the local media.

“While Hannoun told WAFA he had been peacefully protesting, the former security prisoner and father of five from the village of Anabta told the Associated Press that the scuffle began when he pushed a soldier who had aimed his rifle at the protesters. […]

The Israel Defense Forces said that Hanoun, an activist in the Popular Committee to Resist The Wall and Settlements, was “well-known as a central instigator and participant in many violations of public order in Judea and Samaria.” The Popular Committee is responsible for several protests across the West Bank, including a weekly protest at Kufr Quddum, which regularly ends in violent clashes between protesters and Israeli soldiers.” [emphasis added]

The BBC’s subsequent portrayal of the context to what it described as “a protest in the occupied West Bank” predictably included the corporation’s standard mantra concerning ‘international law’.

“It was filmed during a protest against Israeli settlement construction in the village of Shufa, near Nablus, on Tuesday. The settlements are seen as illegal under international law, although Israel disputes this.”

In fact – as stated by the umbrella organisation of the ‘Popular Committees’ to which Hanoon (also Hanoun) belongs – the violent demonstration on September 1st was against “Israel’s planned construction of an industrial zone” called Bustanei Hefetz near – rather than “in” – the village of Shufa in Area C.

The BBC next provided a link that is useless to the vast majority of readers because it is rendered inaccessible by a paywall:

“A few elderly people marched, thinking that soldiers wouldn’t attack us, but we were mistaken. They attacked us like thugs,” Mr Hanoon was quoted as saying by Israel’s Haaretz newspaper.”

Notably the headline to that Ha’aretz article does not use the word “neck”: “Israeli Military Officer Filmed Kneeling on Palestinian’s Head During Arrest”.

The BBC’s report went on to reveal its purpose:

“He compared the incident to the one in which George Floyd was killed by US police. On 25 May, an officer in Minneapolis knelt on Floyd’s neck for several minutes even after he said he could not breathe, sparking a protest movement.

“That’s how I felt, and I felt he was choking me,” Mr Hanoon said.”

While the BBC’s report closed with a statement from the IDF, it is obvious that its take-away messaging once again amplifies politically motivated false linkage between an incident involving Israeli security forces (which is under review) and the unrelated fatal one in Minneapolis. As the BBC is doubtless aware, while amplification of that messaging serves the agenda of anti-Israel campaigners, it does not provide audiences with the “accurate and impartial news” to which they are entitled.

THIS GUARDIAN PHOTO ISN’T WHAT IT SEEMS