Last month we documented some widely promoted framing in BBC radio and television reports concerning the agreement between Israel and the United Arab Emirates. The essence of that framing was described by its prime (but not sole) proponent, the BBC Jerusalem bureau’s Yolande Knell, as follows in one broadcast:

“…Palestinian leaders in the West Bank are going to meet to discuss this later. They’ve already rejected this deal. […] Because of course previous peace plans, including the breakthrough Oslo Accords, promised that Israel would get full diplomatic ties with those wealthy, powerful Arab Gulf countries – Arab countries in general – only in exchange for peace with the Palestinians. Ahm…and that would be on the terms of a two-state solution that would see an independent Palestinian state set up alongside Israel. Ahm…that’s something that came out also in the Saudi-led Arab peace initiative.”

The BBC has yet to respond to CAMERA UK’s complaint concerning that inaccurate portrayal of the Oslo Accords and in the meantime, promotion of such framing – which dovetails with the PLO’s narrative on the subject – continues.

Listeners to the BBC World Service radio programme ‘Newshour’ on August 31st heard a report from Yolande Knell (from 48:18 here) about the first flight from Israel to the UAE which included an interview with an inadequately presented “businessman and commentator”. [emphasis in italics in the original, emphasis in bold added]

Knell: “But Palestinians see the normalisation agreement as a stab in the back. They’ve held protests. In the past the Arab world promised recognition for Israel only when the Israel-Palestinian conflict was solved. Palestinian businessman and commentator Sam Bahour says the new deal won’t bring peace here.”

Bahour: “The indication that Israel has no intention whatsoever, especially this government, of resolving the core issue at hand which is the Palestinian issue. Trump needs to understand: without addressing that, there is no progress. Kushner’s travelling circus around the Arab world will not result in anything.”

In that case, Knell’s phrasing at least appeared to confine her claims to the unilateral 2002 Saudi initiative rather than making inaccurate assertions about the Oslo Accords. However a report published on the BBC News website’s ‘Middle East’ page on August 24th – ‘Pompeo urges more Arab states to make peace with Israel’ – made the following vague claim:

“Palestinians have accused the Emiratis of betrayal. Previous peace plans promised Israel relations with Arab nations only as part of a deal to end their conflict.”

Other BBC reports gave context-free amplification to the Palestinian position. Listeners to the BBC Radio 4 programme ‘World at One’ on August 31st were told by the BBC Jerusalem bureau’s Tom Bateman (from 05:12 here) that:

Bateman: “But the Palestinians believe the deal breaks years of Arab solidarity against Israel’s occupation of land they want for a future state. They have called it a betrayal.”

On the same day Bateman promoted similar framing in a report which appeared on the BBC News website’s ‘Middle East’ page under the headline “Israel and UAE in historic direct flight following peace deal”.

“But the deal is striking for another reason – it leaves the Palestinians feeling as sidelined as ever.

They believe it breaks years of Arab solidarity – and leverage – against Israel’s occupation of land they want for a future state; while ordinary Palestinians feel more and more hemmed in as Israeli settler numbers grow.

They see not only betrayal, but a blind eye being turned by the Emiratis to their reality on the ground.” 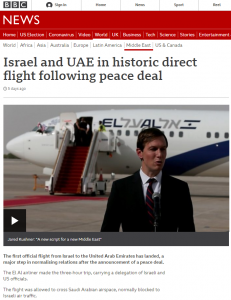 “There were no consultations between the UAE foreign ministry in Abu Dhabi and its Arab neighbours. Almost everyone was taken by surprise, most of all the Palestinians, who called it “a stab in the back” since they have yet to come close to getting a state of their own or ending Israeli occupation.

“The agreement reportedly took Palestinian leaders by surprise. A spokesman for President Mahmoud Abbas said the deal amounted to “treason“.” ‘Israel and UAE launch direct phone links after historic accord’, 16/8/20

“The Palestinians however reacted angrily, calling the peace treaty a “betrayal“.

Nabil Abu Rudeinah, a spokesman for Palestinian President Mahmoud Abbas, called on the UAE to withdraw from what he called a “disgraceful” agreement, while the Palestinian ambassador to the UAE was recalled.” ‘Kushner: Israel-UAE treaty a ‘massive change’ for the region’, 14/8/20 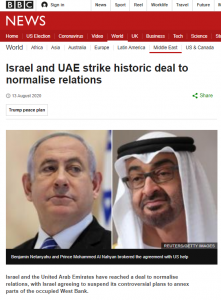 “Palestinian leaders were reportedly taken by surprise. A spokesman for President Mahmoud Abbas said the deal amounted to “treason“, and the Palestinian ambassador to the UAE was being recalled. […]

And as far as the Palestinians are concerned, it is hard to see this news creating anything other than frustration, that they have once again been pushed to the sidelines. […]

But a senior Palestinian official, Hanan Ashrawi, condemned the deal, saying the UAE had “come out in the open on its secret dealings/normalisation with Israel” and telling Prince Mohammed: “May you never be sold out by your ‘friends’.” […]

And in Gaza, the Hamas militant group called the deal a “stabbing in the back of our people.”” ‘Israel and UAE strike historic deal to normalise relations’, 13/8/20

As we see, for over two and a half weeks BBC audiences repeatedly heard that the Palestinians had been ‘stabbed in the back’, ‘betrayed’ and ‘sidelined’ by an agreement portrayed as ‘treason’ and described as breaching ‘Arab solidarity’ and ‘promises’ supposedly made in ‘previous peace plans’.

Interestingly, in all that time BBC audiences were not provided with a realistic portrait of the unilateral 2002 Saudi initiative which, as the corporation itself reported at the time, was deemed a ‘non-starter’ by Israel from the outset, not least because its various ‘take it or leave it’ conditions included the ‘return’ of Palestinians to Israel.

Neither did the BBC make any effort to remind its audiences of the opportunities for resolution of the conflict which were serially rejected by the Palestinians over the years, including the Olmert offer and the earlier Clinton proposal.

In the absence of that relevant context, the BBC’s repetitive but unquestioning amplification of Palestinian framing of this story does not contribute to audience understanding of the reasons why – as one leading Israeli analyst put it soon after the agreement was announced – “the Arab world has changed, the Palestinian narrative has not”.

“Palestinians lost a great deal last week. They weren’t “betrayed,” as some PA leaders have complained, but simply left behind. They didn’t lose vital allies who cared deeply for their cause, but one-time supporters who still vaguely support them but are tired of the intractability of their cause.”

Unfortunately for BBC audiences, those bringing them Middle East news appear to be quite content to amplify by rote trite PLO talking points rather than providing the “range and depth of analysis and content not widely available from other United Kingdom news providers” that the BBC’s public purposes pledge.