A month on from the explosion in Beirut, the BBC News website continues to produce content relating to that story which ranges from the search for survivors and lost pets to the effects on the local rowing club.

One topic which has not received any coverage to date on the website’s ‘Lebanon’ page is that of the visit by Hamas leader Ismail Haniyeh to Lebanon.

Following a meeting with Turkey’s president on August 22nd which was condemned by the US State Department and came in the wake of a report by the Telegraph that Turkey has granted citizenship to “senior operatives of a Hamas terrorist cell”, Haniyeh arrived in Beirut for the first time in 27 years where, together with Hamas’ Saleh al Arouri, he met with the leader of the Palestinian Islamic Jihad, Ziyad al-Nakhalah, on September 2nd. The Times of Israel reported that:

“The meeting with al-Nakhalah discussed, among other issues, the recent deal to normalize ties between Israel and the United Arab Emirates. 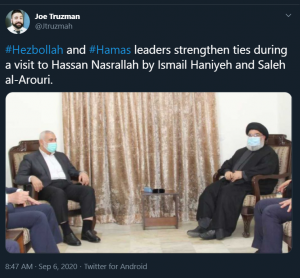 “The meeting stressed the importance of communication and coordination between them to confront aggression and confront plots, especially the ‘Deal of the Century’ (the Trump peace plan), colonial annexation plans, normalization projects and attempts to tighten and legitimize the siege of Gaza,” Haniyeh’s office said in a statement.”

In addition, the ToI noted that:

The following evening Haniyeh and Nakhalah took part in a video conference with leaders of other Palestinian factions in Ramallah.

“Senior members of all 14 main major Palestinian factions were in attendance for the first time in nearly a decade. Hamas chief Ismail Haniyeh and Islamic Jihad leader Ziyad al-Nakhalah joined by video conference from Beirut.

“We will work to end division, achieve reconciliation, and hold general legislative elections… Know that we are one people,” Abbas said in a speech opening the meeting. […]

Despite the rhetoric of unity, Haniyeh’s speech at the event made it clear that deep divides remain between the two parties. The Hamas leader made plain in his address that Hamas would not countenance surrendering “one inch” of historic Palestine, i.e. sovereign Israel.

“We as Hamas will not recognize Israel, and will not renounce on inch of Palestinian land, and Israel will remain our enemy. Our choice is one of total resistance to it,” Haniyeh said.

While Abbas stressed the Palestinian Liberation Organization as the sole legitimate representative of the Palestinian people, Haniyeh said that Hamas would offer “an alternative” to the PLO. Haniyeh added that the Fatah-dominated PLO ought to be reformed so as to more effectively include Hamas and Islamic Jihad.”

Haniyeh’s trip to Lebanon also included a meeting with Hizballah’s Hassan Nasrallah and a visit to a refugee camp. 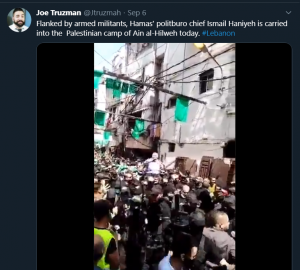 “Also on Sunday, Haniyeh visited the Ain al-Hilweh refugee camp in southern Lebanon, according to Al-Manar. During his visit, Haniyeh said the recent normalization agreement between the United Arab Emirates and Israel did not represent the true stance of the Arabs.

“Today’s meeting is in Beirut and Ain al-Hilweh, while tomorrow we will meet in Palestine and Al-Quds, God willing,” said Haniyeh, according to the report.

The Hamas leader stressed that the Palestinian “right of return” was “sacred,” and said that Hezbollah’s rockets “are the main retaliation to draw the map of Palestine on [the] battlefield.”

The Lebanese terror group’s rockets, said Haniyeh, could reach Tel Aviv and beyond.

“We came from Palestine to Ain al-Hilweh to say that Palestine is for us,” he told a packed audience at the Palestinian refugee camp.”

Haniyeh’s meetings with Lebanese politicians and leaders of other terrorist groups have received plenty of coverage from media outlets in the Middle East and beyond. Remarkably, the world’s largest media organisation has to date not found any part of that story newsworthy at all.