Three years ago we looked at a BBC report dating from September 6th 1970 on the Dawson’s Field hijackings by the PFLP. Titled “Hundreds held in series of hijacks“, the report opens: [all emphasis added]

“Four New York-bound airliners have been hijacked over western Europe in an unprecedented operation carried out by a militant Palestinian group.

Three of the planes taken over by the Popular Front for the Liberation of Palestine (PFLP) have been flown to two different locations in the Middle East.”

“Palestinian militants have blown up the three planes they have been holding at an airfield in the Jordanian desert.”

In recent years we have documented several items of BBC content relating to those hijackings:

On September 7th BBC World Service radio chose to revisit that topic in an edition of its ‘Witness History’ programme titled ‘The Dawson’s Field Hijacking’. 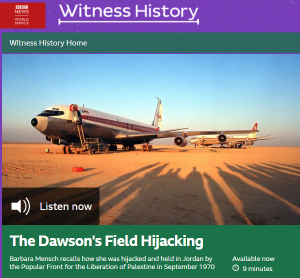 “Barbara Mensch recalls how she was hijacked and held in Jordan by the Popular Front for the Liberation of Palestine in September 1970. Barbara’s plane was forced to fly to a disused British airbase in Jordan, whilst on the final leg of a flight from Tel Aviv to New York. She was imprisoned on board the TWA plane for almost a week and then held hostage in the Jordanian capital Amman for a further fortnight, as the so called Black September conflict erupted between militant Palestinian groups and the Jordanian Army.”

As was the case in those BBC reports from 50 years ago, throughout the programme presenter Bob Howard referred to the terrorist organisation to which the hijackers belonged using the euphemistic term “militants” and the word terrorists was not heard once.

Howard: “The two hijackers, a man and a woman, armed with a revolver and a hand grenade, now effectively held the 155 passengers and crew hostage. They were hoping to use them as a prisoner exchange for Palestinian militants held in various jails in Israel and Europe.”

As we have previously had cause to note, three of the prisoners described by Howard as “militants” had carried out a terror attack on an El Al plane in Zurich the previous year and three others had carried out an attack on a bus carrying El Al passengers at Munich airport on February 10th 1970, killing one person and wounding several others.

Listeners were told that:

Howard: “…over the course of three days there’d been attempts to hijack four other [sic] planes. One had failed, resulting in the death of a hijacker but another three had succeeded. […] Three days later a BOAC VC10 was hijacked en route to London and also flown to the same Jordanian airfield.”

Howard: “The hijackers of the three planes had joined with other PFLP militants and were now looking to escape from Dawson’s Field.”

Howard did not clarify that the point of that later hijacking was to pressure the British authorities to release Leila Khaled who had taken part in the failed hijacking of an El Al flight. Later listeners heard that:

Howard: “Although all of the passengers survived their ordeal, several PFLP prisoners had been released in exchange…”

BBC World Service audiences heard nothing about the British government’s negotiations with the PFLP concerning the release of Khaled or the radio station’s own small role in that story:

“At 7pm on 13 September, the BBC World Service broadcast a government announcement in Arabic saying that the UK would swap Khaled for the hostages.”

Howard: “…one of the most extraordinary hostage takings in aviation history: the Dawson’s Field hijackings which precipitated the start of the Black September; the struggle between Palestinian militants and the Jordanian army.”

Howard: “September 1970 and tensions were rising between King Hussein of Jordan and Palestinian militant groups. They’d based themselves in the kingdom following the 1967 war with Israel. They’d then launched military operations across the border which had drawn Israeli reprisals that had killed Jordanians.”

Howard: “But the hijacking of the airliners was one more spur to action for King Hussein of Jordan who believed his country was being destabilised by Palestinian militant groups such as the PFLP. Just a few days after the destruction of the planes, the Jordanian army was deployed in Palestinian areas during what became known as Black September.”

Howard did not clarify to listeners that Hussein’s ‘belief’ was based on attempts on his life, calls for his overthrow and (as noted in a BBC report from 2001) the PLO’s setting up of ‘a state within a state’.

While the ‘Witness History’ programme focuses on personal accounts from people who experienced historic events, clearly the presenter’s role is to provide listeners with the context essential to understanding of those accounts. In this case, not only was much of the relevant context missing, but the BBC perpetuated its half-century-old failure to use accurate language to describe that particular chapter in the history of Palestinian terrorism and its perpetrators.

WHEN DID THE BBC BEGIN AVOIDING THE USE OF THE WORD TERROR IN ISRAEL REPORTING?

One reply on “What has changed in 50 years of BBC reporting on a PFLP hijacking?”