In the context of the Coronavirus pandemic, the BBC’s educational department – BBC Teach – has recently been promoting and extending its ‘Bitesize’ online study support resource.

That resource has long included material relating to the GCSE exams taken by high school students in parts of Great Britain and Northern Ireland and one of the available subjects is history. One of the sections offered is titled ‘The Middle East class clips’ and it includes seven videos (not available for view outside the UK) dating from 2004.

The first of those videos is titled ‘Origins of the Arab-Israel two-state solution’. 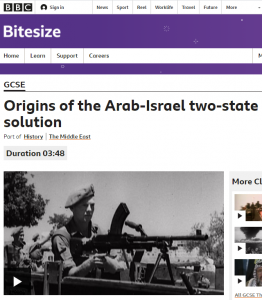 “The British produced the Peel Commission that concluded there should be an end to the Palestine Mandate. The Peel Commission recommended a two-state solution: one Arab, one Jewish, because of the promises made to both Arabs and Jews during the First World War. The 1930s saw a growth of anti-Semitism in Nazi Germany and across Europe that also brought a growth in Jewish migration to Palestine. Arab resentment of the arrival of large numbers of Jews saw the British deploy more troops on the streets of Jerusalem and other major cities.

Arab violence erupted against the British during the General Strike of 1936 and again in 1937. This was a rethink on their position in the Middle East and a withdrawal from the Balfour Declaration of 1917.

In 1939, the British published their White Paper on the future of Palestine. It recommended controlled Jewish migration for five years and thereafter continued Jewish migration with Arab consultation and permission. The Arab communities refused. Professor Yezid Sayigh argues this was a mistake, because it would have led to the creation of an Arab state far sooner.”

The fact that Sayigh has advised and represented the Palestinians in the past is not revealed to viewers and neither are they informed of the anti-Israel activities of two of the other ostensibly neutral academic contributors, Shlaim and Khalidi.

Each of these videos includes suggestions for teachers titled “classroom ideas” – in this case:

“Students may find it useful to make a list of key factors that led to the changing British attitude towards Palestine by 1939 and their eventual withdrawal by 1948.”

Ignoring the San Remo Conference and the 1922 League of Nations Mandate for Palestine – which of course is the context to and reason for British administration of the Mandate that commenced in 1923 – the video begins in the 1930s.

Narrator: “The rise of Nazism in Hitler’s Germany opened a new horrific chapter of antisemitism. Throughout the 1930s Jews fled from Europe to settle in Palestine. Immigration quadrupled. But the Arabs resented their arrival and the Jews soon came under attack in their new homeland.”

Newsreel archive: “At the Wailing Wall refugees under British protection leave their quarters where terrorists have instituted the rule of force. British police search for arms in a country where in just over a month nearly 40 people have been killed in disturbances.”

Jewish immigration (including from Yemen) and British imposed limitations on it of course began long before the 1930s, as did Arab violence and rioting.

Narrator: “Because they failed to respond to Arab fears, the British came to be seen as hostile to the Arab cause and they too began to come under attack. Arab discontent erupted in a wide scale civil disobedience with a general strike in 1936.”

The Arab Revolt of 1936 of course included violence as well as a “general strike”.

Narrator: “As things got worse, in 1937 Britain set up a royal commission to look at the issue, headed by the Secretary of State, Lord Peel. The Peel Commission recommended that the Mandate for Palestine should be ended. It called for the land to be divided into Jewish and Arab states.”

Viewers were not informed that the British did not have the authority to end the Mandate for Palestine.

Avi Shlaim: “The Peel Commission of Inquiry and its report was significant because the analysis was correct. There were two nations and they could not be reconciled and the only solution was partition.”

Narrator: “Palestinian and Arab representatives rejected this. They demanded an end to immigration and the setting up of an independent Arab state.”

Interestingly, viewers are told nothing about the unrestricted Arab immigration to Mandate Palestine. Neither are they informed that the 20th Zionist Congress agreed in principle to partition, but not the proposed boundaries which left the British in control of certain areas.

Newsreel archive: “A new Jerusalem, built for peace, today is the centre of turmoil and riot. British patrols in the city adopt the sternest methods to keep order.”

Narrator: “In the summer of 1937 the Arab Revolt that had been suspended during the deliberations of the Peel Commission reignited.”

Newsreel archive: “Royal Engineers purged with dynamite the area where many have met a violent death.”

Rashid Khalidi: “That revolt in turn forced the British to bring in an unprecedented concentration of forces; tens of thousands of troops, squadrons of planes. And…ehm…on the eve of World War Two, which everyone knew by the late 30s was coming, put Britain in an impossible situation.”

Narrator: “Once they’d crushed the revolt, the British began to rethink the way they ran the Mandate, trying to keep order in an increasingly tense environment. They were paying the price for their earlier double-dealing.”

Viewers are given no explanation of that reference to British “double-dealing” but given the BBC’s record, it is not unlikely that it relates to the Hussein-McMahon correspondence which is repeatedly misrepresented in BBC content. Ignoring the Woodhead Commission report of 1938, the video proceeds to the MacDonald White Paper.

Narrator: “That rethink resulted in a dramatic change of direction from Balfour’s promise to the Zionists. In 1939 a British government White Paper proposed that Palestine should be one country with Arabs and Jews sharing authority. For five years there’d be strict limits on Jewish immigration. Beyond that, new immigrants could only come if the Arabs agreed.”

Benny Morris: “Just at the moment when the Jews most needed a state, a place to run away to, a haven for their persecuted brethren, the British closed the gates and they left them stranded in effect in Europe which ultimately meant that they were going to die at Nazi hands. I mean the British didn’t necessarily know this but they knew that the Jews were being persecuted and nonetheless they switched policy and closed Palestine to Jewish immigration.”

Yazid Sayigh: “In 1939 the British published a White Paper on Palestine which, looking back now, could have given the Arab community pretty much all it wanted so long as it allowed continued Jewish inward migration but Jews would then have had to live within an Arab State of Palestine. And it was a historic error on the part of the Palestinian leadership of that time that it rejected the British White Paper.”

Viewers are not informed that while nothing came of the main proposals of that 1939 White Paper, its recommendations concerning restrictions on the purchase of land by Jews were indeed enacted the following year.

This video is presented to British pupils as an explanation of “Origins of the Arab-Israel two-state solution” even though it relates solely to two proposals (one of which was in no way ‘two-state’ and both of which were rejected by the Arabs) put forward by the country administering the Mandate for Palestine on behalf of the League of Nations rather than ‘solutions’ put forward by the parties themselves. Obviously a major fault in this material made for students of history is the absence of crucial context concerning the Mandate for Palestine and its failure to address events before the 1930s.