In late June the BBC World Service radio programme ‘Newshour’ aired a report by the BBC Jerusalem bureau’s Yolande Knell which was described as being about “How a worsening of relations with Israel is affecting the health of Palestinians”.

“Last month the Palestinian president said his government was giving up on past peace agreements [sic] with Israel because of its plans to annex parts of the occupied West Bank. As our Middle East correspondent Yolande Knell explains, that decision stopped cooperation on many security and civil matters, including the issuing of medical travel permits.”

Knell: “Mira needs an Israeli permit to leave Gaza for specialist surgery abroad but the Palestinian office in Ramallah that would normally give a financial guarantee and do the coordination is no longer working.”

As noted at the time, Knell’s report did not include any interviews with the Palestinian Authority officials responsible for the decision to end cooperation in that field and others.

Last week the Times of Israel reported that a mechanism has been found to ease the plight of patients from the Gaza Strip. 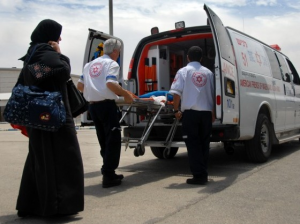 “The United Nations said that it had reached a temporary arrangement in which the World Health Organization would coordinate between the Palestinian Authority and Israel to ensure Gazans could receive exit permits to be treated in Israel and West Bank hospitals.

“Following extensive advocacy and negotiations with stakeholders, WHO on Sunday, September 6, initiated a temporary coordination mechanism to support Palestinian patients and companions required by Israel to apply for permits to access essential health services outside the Gaza Strip,” Gerald Rockenschaub, the head of the WHO’s mission to the Palestinians, said in a statement on Monday. […]

The mechanism had originally been announced on July 20, with the promise that it would begin operating by the second half of July. However, it was subsequently delayed for two and a half months without any public explanation.”

The report goes on to state that:

“…Israel had already agreed to the proposal, but the Palestinian Authority delayed accepting the arrangement.”

Since that report by Yolande Knell was aired in late June the BBC has produced several reports on the topic of healthcare in the Gaza Strip and the Coronavirus epidemic. However audiences have yet to see any follow-up reporting on the topic of the new mechanism for the issue medical travel permits.