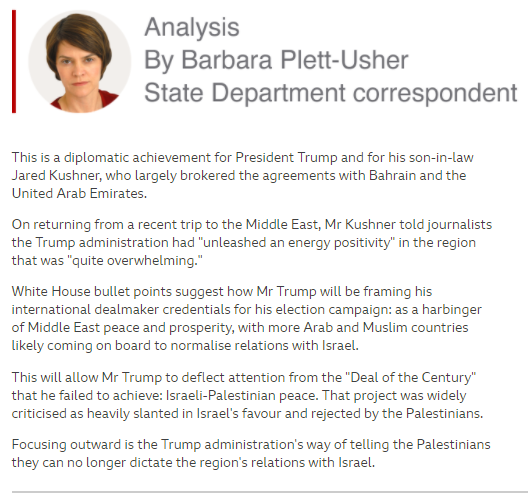 Some of the same points also appeared in a Twitter thread produced by Plett Usher. The last of the nine Tweets in that thread reads: 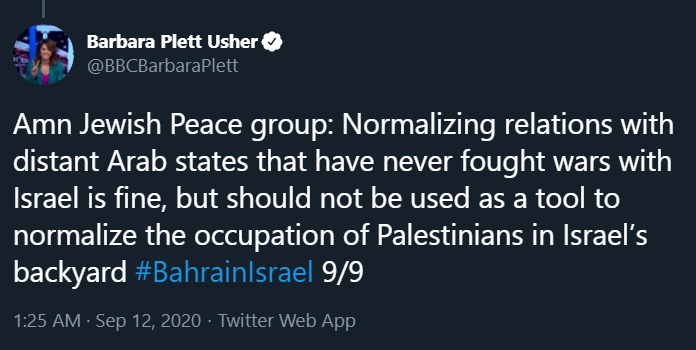 Plett Usher did not provide the name of the “Jewish Peace group” whose views on the matter of the normalisation of relations between Israel and Bahrain she considered important enough to paraphrase and amplify to her more than thirty thousand Twitter followers.

Her Tweet does however bear strong resemblance to parts of a statement put out several hours earlier by the organisation ‘Americans for Peace Now’ (a sister group to the Israeli political NGO ‘Peace Now’ which is widely quoted and promoted by the BBC) which includes amplification of the ‘apartheid’ smear:

“But Israel’s national security concerns are not about its relations with Gulf states, which were never in a state of war with Israel. Israel’s chief national security challenge is its continuing occupation of its Palestinian neighbors. Israel’s 53-year-old occupation denies Palestinians their most basic civil and human rights, and has created an apartheid-like situation in the occupied West Bank.

Formally normalizing relations with Arab states that lie far beyond Israel’s horizon is fine. But not if it distracts Israelis, Americans, and other stakeholders in Israeli-Palestinian peace from the disgraceful reality in Israel’s backyard, its ongoing occupation, disregard for Palestinian rights, and continuing settlement expansion. In fact, we worry that this is a motivation behind this otherwise positive trend.”

Just the week before, the new BBC Director General had addressed the topic of impartiality in his maiden speech.

“Let’s start with the number one priority: to renew our commitment to impartiality.

Trust in our impartiality is not a nice to have, it is the very essence of who we are. It is the bedrock of why people come to us. […]

But while we do many things right, I do hear questions about whether due impartiality is deliverable, even desirable, in these more polarised, divergent times. Importantly, it is not simply about left or right. This is more about whether people feel we see the world from their point of view. Our research shows that too many perceive us to be shaped by a particular perspective. […]

To be clear, this is not about abandoning democratic values such as championing fair debate or an abhorrence of racism. But it is about being free from political bias, guided by the pursuit of truth, not a particular agenda.

If you want to be an opinionated columnist or a partisan campaigner on social media then that is a valid choice, but you should not be working at the BBC.”

The first of the introductory ‘Key Points’ in the BBC’s guidance on social media use reads:

“All BBC activity on social media, whether it is ‘official’ BBC use or the personal use by BBC staff is subject to the Editorial Guidelines and editorial oversight in the same way that our on platform content is.”

Just as “on platform” content would not promote the views of an inadequately identified third party (except in very specific circumstances), one would expect BBC correspondents who chose to give amplification via social media to a particular view of a topic in the news to at least identify its holders so that members of the public can put that viewpoint into its relevant context.

In this particular case the relevant context includes the fact that in October 2016 a representative from ‘Americans for Peace Now’ spoke at a controversial UN Security Council session.

“Friedman told the Council that Israel’s settlement policy “is ending the chance for peace.” She also called on the UN “to send a message to Israel and to end this policy.”

She said actions by Israel threatened its character as a democracy and criticized settlement expansion, a significant portion of which she called “illegal growth.”

Friedman also criticized campaigns “by reactionary groups in Israel and by the Israeli government itself” against human rights groups, such as her group’s Israeli sister organization, Peace Now.

“These groups are being targeted because their work reveals facts that some prefer to hide — facts that challenge the official Israeli government narrative,” she said.

When a BBC correspondent chooses to amplify the viewpoint of a particular organisation as part of ‘analysis’ of an event, obviously the name of that party and the political stances it takes are highly relevant. The failure to provide that essential information is exactly the sort of action which contributes to the perception of BBC content being “shaped by a particular perspective” (which it aspires to mainstream) as noted by the corporation’s new director general.