Previously we looked at a video available at the BBC’s ‘Bitesize’ online study support resource which includes material relating to the GCSE exams taken by high school students in parts of Great Britain and Northern Ireland. One of the sections offered in the history category is titled ‘The Middle East class clips’ and it includes seven videos (not available for view outside the UK) dating from 2004.

The video consecutive to the one previously discussed is titled ‘UN partition plan for Palestine and establishing the State of Israel’. 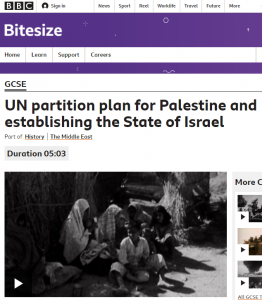 “Using a mixture of archive footage and interviews with experts in the field of Middle Eastern politics, we are introduced to the lengths which some were willing to go to achieve the goal of an independent Jewish state in the Middle East in pre-state Israel. There are examples of the Jewish Underground activities and good visuals of the bombing of King David Hotel in 1946.

Experts Benny Morris, Rashid Khalidi and Yezid Sayigh discuss the British plan for withdrawal in 1947 and dispute the impact of the UN partition plan upon Jewish and Arab communities. There is also a touch on the claims made by both sides on the Arab refugee problem.”

Once again, the fact that Sayigh has advised and represented the Palestinians in the past is not revealed to viewers and neither are they informed of the anti-Israel activities of one of the other ostensibly neutral expert academic contributors, Rashid Khalidi.

Each of these videos includes suggestions for teachers titled “classroom ideas” – in this case:

“Students can use the clip as an introduction to a hot-seating task, where some members of the group are allocated roles, for example: member of the new Israeli government, Arab refugee, British diplomat, representative of the UN. In those roles the students could be questioned by the class about the causes and effects of partition and what the formation of Israel means to them.”

Like the previous video, this one too makes no mention of the San Remo Conference or the 1922 League of Nations Mandate for Palestine – which of course is the context to and reason for British administration of the Mandate. Rather, the video inappropriately focuses viewers’ attentions on Britain’s Balfour Declaration and it commences where the previous video left off; with the 1939 White Paper.

Narrator: “The Zionists thought Britain’s position was a betrayal of Balfour’s promise. Many felt the only way to oppose the White Paper was through force. So now it was the turn of the Jews to rebel against British rule. Jewish underground groups defied the British restrictions on immigration by smuggling people into the country. But as Jewish unrest intensified, terrible events in Europe were changing the whole landscape. As the British restrictions on Jewish immigration held firm, Zionist guerillas took action.”

Jumping to July 1946 without any reference to relevant events during those seven years, the video then shows archive footage headlined “Terrorists attack in Jerusalem”.

Newsreel: “After a bomb explosion caused by terrorists on the British headquarters of Jerusalem, one entire corner of the King David Hotel – a building of seven storeys – was razed to the ground.”

The same archive footage was used in a BBC World Service history programme in 2018. In that programme viewers were told of the warnings given before the explosion but that information – as well as the context to the attack and its condemnation by the Jewish National Council and the Jewish Agency – is absent from the BBC’s educational video.

Narrator: “The attack on the King David left more than 80 dead: British, Arab and Jewish civil servants. It was a dramatic escalation of the Zionist revolt.”

Newsreel: “Once more the civilised world has received a rude shock at the hands of fanatics whose wanton act is contrary to the dictates of all creeds alike and imperils the best interests of the cause that it strives to promote.”

The BBC’s film makes no mention of the fact that just days later, the British part of  “the civilised world” made the decision to detain Holocaust survivors trying to make their way to Palestine in internment camps in Cyprus.

The video then turns to UNGA resolution 181.

Narrator: “With hostilities growing between Jews and Arabs – and between the Zionist militias and the British army – Britain decided it was time to relinquish its mandate and get out of Palestine. It handed the problem over to the newly formed United Nations. In 1947, after a special investigation, the UN’s general Assembly recommended dividing Palestine into Jewish and Arab states, with Jerusalem under UN control.”

Morris: “This was seen by the Jews as a great victory. They’d been striving for over 50 years for world recognition and for world support for a Zionist state and here at last it was embodied in a formal decision of the world community. The world was supporting the Zionist venture and was not accepting the Arab opposition to a Jewish state.”

Narrator: “Zionist leaders promptly accepted the UN’s Partition Plan. It wasn’t everything they wanted but it was better than nothing. But the proposal was rejected by the Palestinian Arabs and by the surrounding Arab states. Arabs were bitterly resentful. They felt Britain’s inter-war policy of allowing Jewish immigration had strengthened the Zionist hand.”

Khalidi: “They could never have imposed themselves on the Arabs without the medium of British bayonets. Inconceivable. Without the greatest power of the age forcing the Arabs to accept these things by main force, Zionism could never have established itself successfully in Palestine in the way it did.”

Concealing the fact that the conflict that began immediately after Resolution 181 was passed also involved foreign forces in the form of the Arab Liberation Army and failing to clarify that the task entrusted to Britain as administrator of the Mandate for Palestine included “placing the country under such political, administrative and economic conditions as will secure the establishment of the Jewish national home”, the video goes on:

Narrator: “Fighting began between the Palestinians and Jews days after the adoption of the UN Partition Plan. The country slid into civil war. The fighting became increasingly vicious with claims of atrocities on both sides. Palestinians have claimed there was a policy to push them off their lands, to rid the country of its non-Jewish inhabitants.”

Sayigh: “Palestinians fled because they were expelled by Israeli forces or about to be attacked or had been the subject of a whispering campaign that convinced them – by Israeli agents deliberately planted – err…that they were about to suffer massacres and atrocities such as they had heard of occurring in other places in Palestine such as Deir Yassin and elsewhere.”

The BBC’s video makes no attempt to put that claim of “massacres and atrocities” in Deir Yassin into its correct context or to explain the role played by Arab leaders in the Palestinian evacuation. No mention is made of the Arabs who chose not to flee their homes and later became Israeli citizens.

Morris: “There was never any policy of mass expulsion or blanket expulsion. It was never annunciated, it was never carried out. The important thing was the Israeli government took the decision not to allow them to return; this was the policy decision. It understood these refugees were part of a people who had fought against Jewish statehood, who were trying to destroy the Jewish state. Were they allowed back, they could be and act as a fifth column and therefore couldn’t be allowed back otherwise they would destabilise the state.”

Newsreel: “The scene is near Jericho; one of the camps for Arab refugees. The story is one of destitution. For these people, as a result of the war in Palestine, have either fled or been expelled from their homes and their livelihoods.”

Narrator: “The upheaval left hundreds of thousands of Arabs without a home. For these refugees it was al Nakba – the catastrophe.”

The BBC’s account makes no mention of the Jews displaced from their homes in the Old City and other Jerusalem suburbs, communities in Gush Etzion or places such as Mishmar HaYarden. Neither does it inform viewers of the hundreds of thousands of Jewish refugees displaced from Arab lands during the same era.

The video closes with the bizarre claim that the topic of Palestinian refugees “was not dealt with as a political issue”.

Sayigh: “At every level, for the Palestinians it…it…there was a material loss that was on a vast scale, that wasn’t rectified or compensated for. Their issue was not dealt with as a political issue. There was no recognition that they had a collective identity as Palestinians and they felt they became marginal people living off the margins of the towns and cities in Lebanon, Syria, Jordan and elsewhere that they took refuge in.”

In fact countries such as Lebanon and Syria have used the Palestinians within their borders as political pawns for decades and in 1959 the Arab League ruled that “Arab states will reject the giving of citizenship to applicants of Palestinian origin in order to prevent their integration into the host countries”. The establishment of a UN agency exclusively for Palestinian refugees in 1949 is of course a prime example of the politicisation of the issue, as is the refusal to dismantle refugee camps which have been under Palestinian control for decades.

Clearly this educational video gives British school students a one-sided and incomplete view of the historical origins of issues which are still relevant today and which so often form the basis for the type of political campaigning they are more than likely to encounter at the next stage of their education in British universities.