Previously we reviewed BBC Radio 4’s framing of the signing of the Abraham Accords on September 15th in Washington. This post will examine coverage of the same event on BBC World Service radio’s flagship news and current affairs programme ‘Newshour’.

That day’s earlier edition of the programme (from 14:06 here) included the report by Tom Bateman that had already been aired that morning on BBC Radio 4’s ‘Today’ programme in which he claimed that “the Gulf deal brings a glimmer of deliverance for Mr Netanyahu” in relation to a “crisis at home”.

Bateman also repeated what has been one of the BBC’s main talking points ever since this story began:

Bateman: “But for Palestinians the Gulf countries’ deal with Israel is a betrayal. They think it breaks years of Arab solidarity over their hopes for an end to military occupation. Countries in the region had offered formal ties with Israel only once Palestinian statehood was achieved.”

Listeners to that programme also heard an interview by Frank Gardner with the UAE minister Anwar Gargash, a filmed version of which appeared on the BBC News website.

The later edition of ‘Newshour’ on that day had the signing of the accords as its top story, with presenter Tim Franks indulging in speculation during his introduction (from 00:11 here). [emphasis in italics in the original, emphasis in bold added] 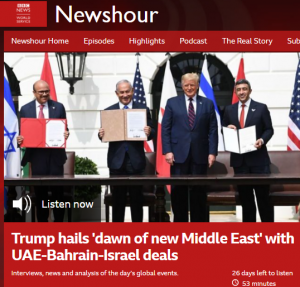 Franks: “And we’ve got one big story today. It comes out of Washington. The dignitaries on the sun-bathed terrace of the White House a few hours ago appeared to be hoping that today’s images will be reproduced for years to come; a sharper definition replay of that grainier footage from decades ago; the then Israeli prime minister under the benign grin of the then US president shaking hands with, in turn, the president of Egypt or the king of Jordan. Today, with Donald Trump presiding, it was the turn of Binyamin Netanyahu, the Israeli prime minister, to appear smiling side by side with the foreign minister of the UAE, Sheikh Abdullah bin Zayed, and the foreign minister of Bahrain, Abdullatif bin Rashid, as they signed diplomatic agreements. Watching all this with frustration, if not fury and despair, were the Palestinians.”

Like BBC Radio 4, ‘Newshour’ managed to cover this topic extensively, but without any contribution from any Israeli official involved in the story. Having downplayed the importance of the Abraham Accords by describing them as “less of a breakthrough than a reflection of existing reality”, Franks did however conduct an interview with former Israeli MK Einat Wilf, whom he told:

Franks: “You are keeping millions of Palestinians under occupation. This doesn’t move the dial at all on that.”

With Wilf having corrected him on that point, Franks described her contribution as “a gush of enthusiasm” and went on to introduce the above interview by Frank Gardner with the UAE minister Anwar Gargash.

At 9:10 listeners heard from a contributor who does not represent any of the parties to the agreements.

Franks: “Well if Israel, the UAE and Bahrain all talk about the three parties benefiting, there is one clear loser today […] the Palestinians. Because up to now the Arab consensus had been that there’s be no further normalisation of relations with Israel until the future of the Palestinians had been sorted out; in other words that they had their own state. Now that consensus has been very visibly undermined by the UAE and Bahrain and perhaps others to come. Husam Zomlot is the Palestinian representative in London.”

With Husam Zomlot being a regular, if repetitive, BBC interviewee, it is clear that ‘Newshour’ producers would have known in advance exactly what messaging audiences were going to hear. Zomlot began with promotion of the naysayers’ talking point claiming that the accords are not peace agreements.

Zomlot: “I’m not so sure if you can call them peace deals really. Peace happens between two conflicting parties and the conflict is between the Palestinian people and the Israelis. And this conflict has its very well defined framework of resolution that came from the international community. No-one seeks peace in the region more than us, the Palestinian people and no-one wants to see normal relations between states and nations more than us, the Palestinians. Why? Because that would mean the injustice has ended and Israel’s occupation of Palestinian land has ended, people’s legitimate rights have been respected and international law has been applied. But this is not what is happening right now in the White House. It’s painful to see the departure – the very unilateral departure – of two of our Arab brothers countries from the Arab consensus, from the international consensus. There seems to be favours being paid to Mr Trump prior to the elections and we don’t believe this will serve the genuine true cause of peace that we all desire.”

Franks made no effort to challenge Zomlot’s portrayal of peace-seeking Palestinians by asking, for example, why they have refused so many peace offers in the past or why they reward terrorism. Neither did he challenge the claim that areas occupied by Jordan and Egypt prior to 1967 are “Palestinian land”, the claim of an “international consensus” or Zomlot’s cheap jibe concerning the upcoming US election. Instead he raised the point that if additional countries normalise relations with Israel, that “surely only means that the Palestinians are going to be further isolated”.

Zomlot: “No, nothing will change reality. Reality on the ground remains to be the same. There is a people of Palestine – 13 million Palestinians – still under occupation, under colonisation, besiegement in Gaza. Their houses are being destroyed by the day. Their properties are being stolen. Still the violence is growing. The conflict is there, the dynamics of conflict is there. This will not change the reality and if peace [is] to prevail, it will only have to be achieved through the fulfillment of the aspiration of the Palestinian people that are very well supported by numerous international resolutions including that of the UK.”

Once again making no effort to challenge any of Zomlot’s propaganda – even the false claim of 13 million Palestinians “under occupation” – Franks continued with his own agenda.

Franks: “I wonder how much you think that support for a two-state solution is dwindling among Palestinians? How far would you sympathise with those – and people who’ve been in the forefront of the fight among the Palestinians for there to be a single Palestinian state alongside Israel – those who are saying, look, the time is passed now; we have to work towards equal rights within a single state and just forget about this chimera, this mirage of a separate Palestinian state.”

Zomlot: “I don’t think, Tim, this is the real discussion and the real issues. The real issue is how do we end the injustices regardless and the Netanyahu is not interested neither in a one state equal rights scenario and he was…”

Franks [interrupts]: “But I’m not talking about Mr Netanyahu. I’m talking about the Palestinian leadership, whether it’s time to reconfigure what it is you are after.”

Zomlot: “What we are after is what the international community has agreed about. We want to make sure that relations between nations and states are governed according to rules. This is a moment when we have to pause and assess. We want to protect what we have achieved, we want to preserve the international vision and we want to keep on despite and regardless of some individuals who are seeking the embetterment (sic) of their own personal interests.”

Later on in the same programme listeners heard from another frequent BBC contributor and former architect of failed US peace plans, Aaron David Miller (at 14:08) and at 30:05 the above report by Tom Bateman was aired for a third time.

While the talking points promoted in these two editions of ‘Newshour’ on September 15th were similar to the ones amplified on BBC Radio 4, World Service radio clearly went one step further with the provision of a sympathetic platform to the PLO’s representative in the UK from which to promote his messaging, falsehoods and propaganda with no challenge whatsoever from Tim Franks. How the BBC can claim that such an ‘interview’ contributed to audience understanding of the story is of course a mystery.