Back in August we noted that BBC coverage of the the announcement concerning the normalisation of relations between Israel and the United Arab Emirates included two TV reports by the BBC’s State Department correspondent Barbara Plett Usher aired on the BBC News channel on August 13th in which viewers were given inaccurate information. 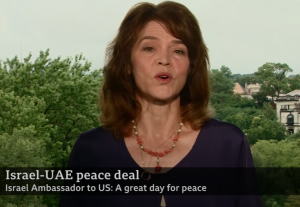 “…what happened is that the Israeli prime minister began to say he was going to annex parts of the occupied West Bank and in a quite unusual move the US ambassador to the UAE made a very public appeal to the Israelis. He had an article printed in the Hebrew press. He also sent a video in which he said if you do this we will not be able to move forward with any sort of normalisation…” [emphasis added]

“There was a very direct intervention by the US ambassador to the UAE in June in which he said directly to the Israelis if you go ahead with this, this is going to jeopardise any relations you want with the Arab countries.” [emphasis added]

CAMERA UK made a complaint to the BBC on that very straightforward issue. Nevertheless, on August 24th we received a response informing us that it would take more time to deal with our complaint and on September 14th we were informed that the time frame for handling it had expired.

On September 29th we received the following communication from BBC Complaints:

“Thanks for contacting us about Outside Source and the BBC News Channel. Our apologies for the delay in replying.

We raised your concerns with the relevant editorial staff.

In fact, only one of the clips has been removed from YouTube: the second continues to misinform audiences – see 03:11 here. CAMERA UK will be pursuing that issue.

Following a second complaint from CAMERA UK, the second video was also taken down from YouTube.