Last year the BBC World Service and the Sundance Institute announced that they would be collaborating for the third year running on the commissioning of a series of audio documentaries, with accompanying short films, titled ‘Rulebreakers’.

The last of those five BBC-funded ‘documentaries’ was aired on BBC World Service radio on September 16th 2020 and its filmed version appeared in the ‘updates’ section of the BBC News website’s ‘Middle East’ page on October 1st and on the webpage of the BBC World Service programme ‘The Documentary’. 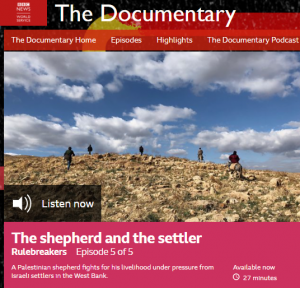 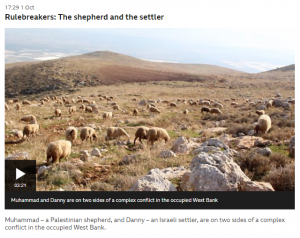 The synopsis to the audio version – titled ‘The shepherd and the settler’ – reads:

“Muhammad is a Bedouin shepherd in a remote corner of the West Bank called Rashash. His family has been herding sheep and goats in Rashash for 30 years and in Palestine for generations. But since Israeli settlers recently moved in nearby it has become difficult for Muhammad to graze his flock undisturbed.

When producer Max Freedman visits Rashash, he sees this conflict in action. One settler tries to scatter the sheep by driving towards them in an all-terrain vehicle. Another chases after the flock on horseback. An Israeli activist tries to use his body as a human shield.

After leaving Rashash, Max sets out to understand what he saw there.”

The item is credited as follows:

So who are the people apparently considered by the BBC to have sufficient relevant expertise to produce a commissioned ‘documentary’ on “this conflict”? In the audio version Max Freedman describes himself and Ilana Levinson (at 07:30) thus:

Freedman: “We’re part of a team which makes a podcast called ‘Unsettled’ which is meant to open up the conversation in the Jewish community about Israel’s occupation of the Palestinian territories.”

Credited producer Emily Bell is also involved with the ‘Unsettled’ podcast and some of its other producers are members of the political organisation ‘If Not Now’ (which has been featured on that podcast) including Ilana Levinson. That information is not provided to BBC audiences despite the existence of editorial guidelines concerning “contributors’ affiliations” which of course also apply to commissioned work.

Later in the item (at 08:16) Freedman tells audiences that:

Freedman: “I grew up in a pretty mainstream American Jewish community. Support for Israel was central to Jewish life. The Jewish state was supposed to make me feel safe and proud. There was an Israeli flag in the sanctuary next to the American flag. We learned Israeli dances in school. There was a charity box in every classroom that sent our pennies to Israel for planting trees. That same community taught values like justice and tolerance, with no acknowledgement of how Palestinians like Muhammad live under Israeli occupation.”

Freedman: “I’ve been producing stories about Israel and Palestine for a couple of years now but today is my first time reporting on the ground.”

In other words, the BBC chose to commission a ‘documentary’ about a complex and charged topic from contributors with a specific political agenda but little expertise. That lack of expertise (and language skills) means that Freedman’s report relies heavily on additional contributors who are likewise inadequately presented to audiences.

One of those is an employee of the political NGO ‘Ir Amim’ whom Freedman introduces only as an “activist”, failing to mention his organisation’s “affiliations, funding and particular viewpoints” as demanded by the BBC’s editorial guidelines.

Freedman: “…Aviv Tatarsky, an Israeli activist who’s my translator today. […] Aviv, my translator, is part of a network of activists who visit places like Rashash all over the occupied West Bank to accompany Palestinians as they do some of their most basic daily activities; herding, farming, walking to school.”

An additional contributor is Arik Ascherman (formerly of ‘Rabbis for Human Rights’) who is introduced with the name of his latest NGO.

Freedman: “Rabbi Arik Ascherman is the executive director of Torat Tzedek – Torah of Justice – and he’s been going to Rashash to accompany Muhammad and the other shepherds for years.”

Listeners are not told that according to the organisation’s website, it co-operates with the controversial group ‘Ta’ayush’ on that project.

Another prominent contributor to Freedman’s report is anti-Israel activist Noura Erakat, who gets a plug for her new book.

Freedman: “Noura Erakat is a Palestinian American human rights attorney and the author of ‘Justice for some; law and the question of Palestine’.

Erakat’s political activities and her connections to ‘Al Shabaka’ and ‘Badil’ are not clarified.

As we see, the majority of facilitators and contributors to Freedman’s project inhabit the same zone of the political map as do he and his co-producers and yet BBC audiences are not sufficiently advised of that highly relevant fact. 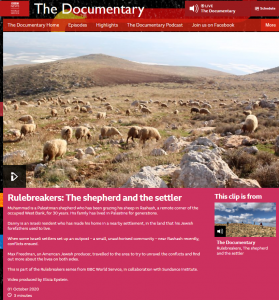 Unsurprisingly, that fact colours the presentation of the story itself. Freedman uncritically amplifies his Bedouin protagonist’s (translated) claims without any evidence of verification on his own part.

Muhammad: “We have been here for 30 years. Maybe they want us to sell the sheep and get out of here.”

Freedman: “Muhammad says that Baruch recently went down to his family’s water tanks – their only supply of fresh water – and dumped them out.”

Listeners hear a predictably selective portrayal of the history which is the context to Freedman’s story with no mention of the occupied status of the relevant territory prior to the Six Day War or its allocation as part of the Jewish homeland in the League of Nations Mandate for Palestine.

Freedman: “The West Bank has been under Israeli military occupation since 1967.”

Freedman: “She [Erakat] says Israel didn’t annex the West Bank because they didn’t want to naturalise the Palestinians who live there. […] So instead the West Bank has long been envisioned as the site of a future Palestinian state.”

Freedman: “Many people say that these Israeli settlements in the occupied West Bank are illegal under international law, including Noura Erakat.”

Freedman refrains from reminding listeners that Israel’s past removal of civilian communities from the Sinai peninsula and the Gaza Strip clearly undermines Erakat’s politicised interpretation of ‘international law’.

Listeners have to wait until the middle of the item (13:10) before they hear the sole indirect reference to the Palestinian Authority and even then the portrayal is not accurate.

Freedman: “Israel’s presence looks different in different parts of the West Bank. Most Palestinians live in cities and villages which have some limited Palestinian governance. But where Muhammad lives, Israel has full civil and military control and that’s also where all the settlements are, including the unauthorised outposts.” [emphasis added]

The ‘settler’ in the title of Freedman’s report is never properly identified other than by the moniker given to him by Freedman – ‘Baruch’ – and audiences do not get to hear his side of the story.

Freedman: “But there’s a growing movement of settlers building outposts in the West Bank that are illegal even by Israel’s standards. Baruch the settler who I saw on the ATV in Rashash, he’s part of that movement.” […]

Freedman: “Sometimes Israel does crack down on these outposts but to Muhammad it’s clear where the power lies: with settlers like Baruch.”

Interestingly, at no point does Freedman address the topic of the legality of Bedouin encampments in Area C in general or in Rashash in particular. When a resident of Kochav HaShahar who is completely unrelated to his core story tells him that Jews have “come back” to a place they inhabited “thousands of years ago”, Freedman is quick to point out that “on the other hand, Muhammad and his family have been here for generations”.

At 07:20 listeners hear Freedman’s commentary on the topic of the name of the outpost where the man he dubs ‘Baruch’ lives.

Freedman: “That night I call my co-producer Ilana back in New York to tell her what I saw in Rashash. […] The outpost that has been giving these guys trouble for the last two years is called in Hebrew angels of peace. […] Malachei HaShalom is a phrase that Ilana and I both know from a prayer called Shalom Aleichem, one that Jews sing every Friday night to welcome in the Sabbath.”

Levinson: “Will you ever hear that the same again? I don’t think I will.”

Listeners are not told that the outpost was originally set up after the June 2015 murder (not reported by the BBC in English at the time) by Hamas terrorists of Malachi Rosenfeld – a resident of the same community of Kochav HaShahar that Freedman visited.

The outpost was named after Malachi Rosenfled and an earlier victim of a terror attack in the same area, Shalom Har-Melech, whose parents also lived in Kochav HaShahar. Remarkably, neither Freedman’s research nor his visit to the community linked to both those victims of Palestinian terror prompted him to explain to audiences why that outpost is called Malachei HaShalom.

Clearly the BBC’s spending of “up to US $10,500” on this commissioned ‘documentary’ did not provide audiences with any new insights whatsoever into a topic which has already been the subject of countless BBC reports. Instead, listeners and viewers got a repeat dose of a long-promoted partial narrative from inadequately presented (and in some cases, foreign funded) political activist interviewees, produced by a team with an ‘anti-occupation’ political agenda that was not sufficiently clarified to the BBC’s funding public, in clear breach of editorial guidelines.

Justice for Some: Law and the Question of Palestine – Noura Erakat Misrepresents History (CAMERA on Campus)