In August 2007 – two months after Hamas’ violent take-over of the Gaza Strip – the BBC reported on related protests:

In 2015 the BBC covered a report from ‘Amnesty International’ on the subject of “abductions, torture and extra-judicial killings of Palestinian civilians” by Hamas security forces in the Gaza Strip.

In October 2018 a report by ‘Human Rights Watch’ on the issue of “systematic arbitrary arrests and torture” on the part of Palestinian Authority and Hamas security forces received international media coverage. The BBC’s report included an account from a journalist in the Gaza Strip:

“Fouad Jarada, a journalist with the Palestinian Broadcasting Corporation, was arrested by Hamas forces in Gaza in June 2017 and held for two months after writing a Facebook post critical of a Hamas ally and critical news reports.

“I was forced to stand blindfolded the entire day in a room called the bus. There were 5 or 10 people with me. On occasion they sat us down in small chairs, but we needed permission for everything we did, including sleeping or speaking,” he said.

“I spent 30 days there… After the first day, the beating started, they asked me to open my hands and started striking me with a cable and whipping my feet.””

In March 2019 the BBC’s Yolande Knell reported on protests in the Gaza Strip:

“The Hamas response to the protests has been harsh.

Dozens of people have been arrested and had their homes raided, among them activists, journalists and human rights workers.

Two workers from the Palestinian Independent Commission for Human Rights were badly beaten and detained.

“I strongly condemn the campaign of arrests and violence used by Hamas security forces against protesters, including women and children,” stated the UN Special Co-ordinator for the Middle East Peace Process, Nickolay Mladenov.”

One can hence assume that the BBC knows full well that Hamas security forces have what the corporation’s editorial guidelines describe as “a known record of violence or intimidation” in addition to being aware of the fact that Hamas is “known for mounting acts of terror”. 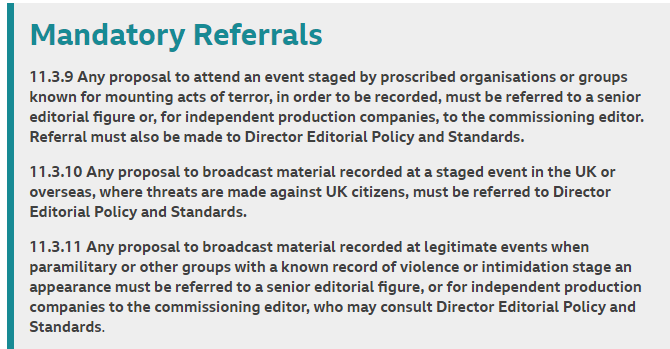 One must therefore conclude that a filmed report (uncredited but apparently produced by the BBC’s Gaza bureau) published on the BBC News website’s ‘Middle East’ page on October 10th under the title ‘Gazans struggle with pandemic and blockade’ received the go ahead from the corporation’s director of editorial policy and standards or “a senior editorial figure” since almost half its content is devoted to uncritical portrayal of a Hamas policeman at work and footage filmed at a Hamas police training session. 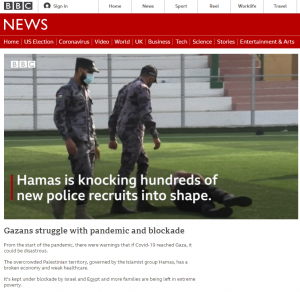 BBC audiences also see context-free references to “the blockade” in the title, in the synopsis and in the film itself.

“From the start of the pandemic, there were warnings that if Covid-19 reached Gaza, it could be disastrous.

The overcrowded Palestinian territory, governed by the Islamist group Hamas, has a broken economy and weak healthcare.

It’s kept under blockade by Israel and Egypt and more families are being left in extreme poverty.” 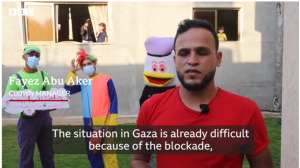 At no point are audiences informed that the reason for the ‘blockade’ is the terrorism perpetrated by the same Hamas terrorist organisation which controls and employs the policemen the BBC was happy to uncritically feature in this puff-piece, despite their record of violence, arrests and torture of less cooperative journalists.