On October 1st the BBC News website published a report headlined “Lebanon and Israel to hold ‘historic’ maritime border talks” on its ‘Middle East’ page which included the following:

“The neighbouring states have technically remained at war since the Arab-Israeli conflict of 1948-49.

It is one of the region’s tensest frontiers, where Israel forces face those of the Lebanese army and the Shia militant group, Hezbollah, and peacekeepers from the UN Interim Force In Lebanon (Unifil) attempt to maintain calm.

In 2006, Israel and Hezbollah fought a month-long war that killed some 1,190 Lebanese and 163 Israelis. The conflict ended in a UN-brokered ceasefire.” [emphasis added]

“The BBC made no effort to inform readers that under the terms of UN SC resolution 1701, Hizballah forces should not be in southern Lebanon and that UNIFIL has failed to enforce the terms of that resolution since it was passed in 2006.”

On October 14th the BBC News website published another report on the same topic titled “Lebanon and Israel hold talks on disputed sea border despite state of war”. That report closes with a near identical copy/paste repetition of the same statements under the sub-heading “Why are the neighbours technically at war?”. 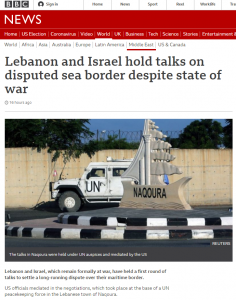 “Lebanon and Israel have remained in a formal state of war since the Arab-Israeli conflict of 1948-49.

It is one of the region’s tensest frontiers, where Israel forces face those of the Lebanese army and Hezbollah, and peacekeepers from Unifil attempt to maintain calm.

In 2006, Israel and Hezbollah fought a month-long war that killed some 1,190 Lebanese and 163 Israelis. The conflict ended in a UN-brokered ceasefire.”

Once again the BBC refrained from clarifying to readers that Hizballah’s presence south of the Litani river and its build up of arms breach the terms of the “UN-brokered ceasefire” that is UN SC resolution 1701.

Despite purporting to explain to BBC audiences why Lebanon and Israel are “technically at war”, this report fails to make any mention of the topic of the territorial claims made by Hizballah and Lebanon after Israel’s withdrawal from southern Lebanon in May 2000, including the Shebaa Farms/Har Dov area. As explained by Michael Krauss and Peter Pham in 2006:

“When then Prime Minister Ehud Barak withdrew Israeli troops from Lebanon in 2000, the UN painstakingly demarcated the border between Israel and Lebanon — for the first time ever — in consultation with authorities on both sides. This international border became known as the “Blue Line.” During the entire exhaustive process, Hezbollah did not make any claim to Shebaa Farms (known to Israelis as Mount Dov, after an Israeli captain killed by Hezbollah terrorists at that location in 1970). Only after the process was finished, that is, after Israel and Lebanon, with UN sanction, agreed that the Blue Line had been properly drawn north of Shebaa Farms, did Hezbollah claim this territory for Lebanon.

The pretext was clear: after 2000, “liberating” Shebaa Farms and “reuniting” the area with Lebanon became Hezbollah’s excuse for holding onto its weapons in defiance of numerous UN resolutions; after other militias in Lebanon had disarmed following the civil war. Many, if not most, Lebanese recognized this as bogus propaganda. But Hezbollah and its Iranian and Syrian patrons needed (and still need) some way, any way, to justify keeping these terrorist brigades around.”

On May 25th 2000 – the day that Israel completed its withdrawal of troops from southern Lebanon – the BBC published a report titled “In focus: Shebaa farms” which is still available online. 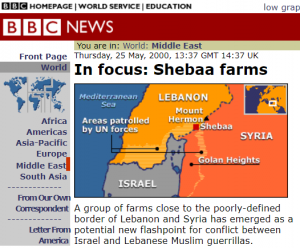 “The Syrian-backed guerrilla group, Hezbollah, says Israel must withdraw from the area of the Shebaa farms – which it says lies on Lebanese territory – or face continued attacks.

Israel says most of the area lies on the Syrian side of the Lebanon/Syria border and that it will only withdraw from the part marked as Lebanese territory on United Nations maps.”

“According to some reports, Israel moved Ethiopian Jews, known as Falashas, to the Shebaa farms in the 1980s.”

In addition to the question of why the BBC chose to promote the derogatory term ‘Falashas’, one may wonder where it got the idea that Israel had “moved Ethiopian Jews…to the Shebaa farms” – a military zone.

The answer to that question was provided by Avi Jorisch in 2002:

“Hizballah’s own website (www.moqawama.org) states the following about Shebaa: […] Ethiopian Jewish immigrants have settled in Shebaa.”

“…there are no Israelis living on “Israeli” Shebaa, as it is a restricted military zone.”

In other words, the BBC amplified a false claim made by a terrorist organisation while whitewashing its source.