Late on October 16th the BBC News website published a filmed report by the BBC Jerusalem bureau’s Tom Bateman which was presented with the exaggerated headline “Olive harvest in jeopardy as tensions rise at [sic] the West Bank”. 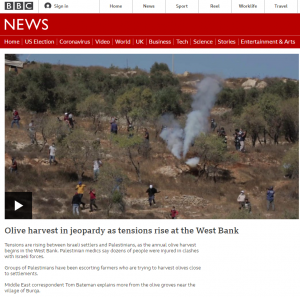 “Tensions are rising between Israeli settlers and Palestinians, as the annual olive harvest begins in the West Bank. Palestinian medics say dozens of people were injured in clashes with Israeli forces.

Groups of Palestinians have been escorting farmers who are trying to harvest olives close to settlements.

Middle East correspondent Tom Bateman explains more from the olive groves near the village of Burqa.”

In fact, Bateman explains very little in that 79 second-long film, including in which of the villages named Burqa it was filmed or why the BBC happened to have a film crew in that particular location near Ramallah on that specific day.

Neither does he bother to identify the “groups of Palestinians” he later describes as “volunteers” and “activists” and he fails to provide any independently sourced explanation of their agenda or their connection – if any – to his visit to that location.

Clad in a helmet and flak jacket, Bateman tells viewers that:

Bateman: “The olive harvest has already been a time of clashes this year. There is an Israeli settlement outpost at the top of this hill and some of the olive trees are near to that and so that’s why this time of year is always a time of tension when the farmers try to harvest the olives close to settlements and many reported attacks already this year from Israeli settlers.

Just over this way you can see some of the volunteers, the Palestinian activists, are trying to make their way up the hill. Now what they say they are doing is that they are here to protect the olive harvest, to protect the farmers.”

On his own twitter account Bateman stated that the footage was filmed on Friday –i.e. October 16th.  The Facebook account of a Palestinian Authority body called the ‘Colonisation and Wall Resistance Commission’ promoted photographs taken in the same location on the same day, one of which gives a somewhat different explanation  (identical to the original Arabic) of why those “activists” were “trying to make their way up the hill”. 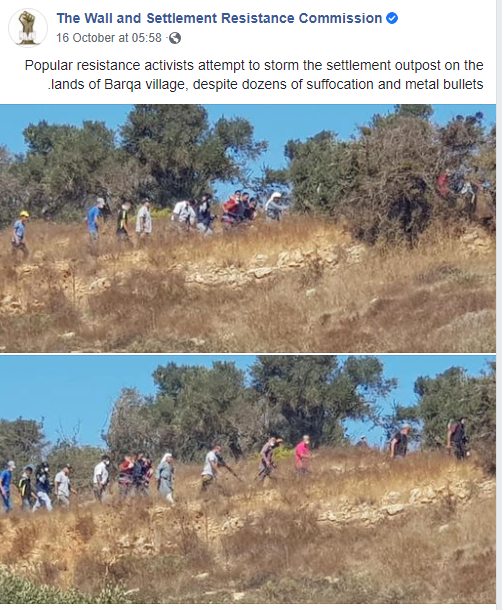 The subtitles on screen at that point in the BBC film show the word ‘gunfire’ although a more accurate description would appear to be the firing of tear gas. Bateman goes on:

Bateman: “The point about the olive harvest is it’s not just economically vital to the Palestinians, especially this year with the devastation that’s been caused by coronavirus, but it’s also symbolically hugely important. A symbol of Palestinian national identity. Israeli forces say they investigate any attacks by settlers and that they safeguard harvests and keep public order. Palestinians dispute much of that.”

The IDF does its best every year to ensure that the olive harvest goes as smoothly and peacefully as possible.

Failing to explain to viewers just how dangerous it is to start a brushfire in a place which has not seen rain for around six months, Bateman continues:

Bateman: “One of the Palestinians lights a fire. Israeli soldiers are moving down here, past the fire that’s burning. The settlers are trying to put it out at the moment and while all this is happening there’s been some Palestinians moving up the path here, throwing stones towards the soldiers. We’re now getting pushed back away from the fire. The settlers here are still trying to put out the fire that’s burning. The Palestinians are being pushed back down the hill. Things kicked off when there was somebody injured and being carried. There are some more rocks being thrown here and the soldiers are firing back. We’re in the middle of this.”

Throughout Bateman’s film viewers see Palestinian “activists”, Israeli soldiers and many members of the press but no olive picking whatsoever. While violent incidents regrettably do sometimes take place in some locations during the olive harvest season, that is not – despite its over-hyped title and synopsis – what Bateman’s film shows. In fact, as he himself states, the violence seen in the film – arson and throwing stones – is perpetrated by the Palestinian “activists” he fails to adequately identify. 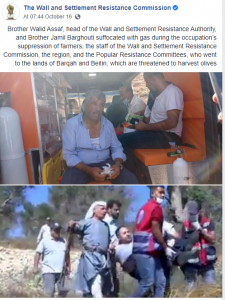 The Palestinian Authority’s ‘Colonisation and Wall Resistance Commission’ (which is headed by former PA agriculture minister Walid Assaf) obviously has a specific political agenda which is not clarified to BBC audiences in this film. Neither is the question of whether it was that PA agency which invited the BBC to cover the event it initiated in Burqa on October 16th: a question which is relevant because, as we have noted here in the past:

Instead, the BBC once again exploited the olive harvest in order to promote already well-worn political narratives together with the false notion that the entire harvest is “in jeopardy”, but refrained from providing audiences with any new insights into the topic.