Previously (see ‘related articles’ below) we have looked at three videos created by the BBC in 2004 (and still available in the UK) within the framework of its ‘Bitesize’ online study support resource which includes material relating to the GCSE exams taken by high school students in parts of Great Britain and Northern Ireland.

One of the sections offered under the history category is titled ‘The Middle East class clips’ and it includes seven videos. The fourth video (chronologically) is titled “The Six-Day War and the Palestinian Liberation Organisation (PLO)”. 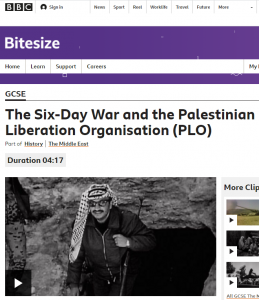 The outside contributors to this video are Benny Morris “Professor of Middle Eastern Studies, Ben-Gurion University” and Yezid Sayigh – presented as “Professor, Centre for International Studies, Cambridge University”, both of whom appeared in some of the earlier films. Once again the fact that Sayigh has advised and represented the Palestinians in the past is not revealed to viewers. Like the previous videos, this one too is presented by the recently retired BBC Northern Ireland journalist Noel Thompson.

Archive newsreel: “From this Israeli frontier post the nearest Syrian forward position is only 700 yards away and it’s on this section of the border that Israeli intelligence sorties have just reported the presence of Russian military advisors.”

Thompson begins with a short account of events in the Spring of 1967 which excludes terrorist raids and attacks on water supplies.

Thompson: “In May 1967 the Soviet Union told Syria that Israeli forces were massing in northern Israel to attack it. It was a lie. The Kremlin was trying to challenge America’s influence in the region, even at the risk of another war. But Syria believed it was under threat and in the interests of Arab unity, joined forces with Egypt much to Israel’s alarm.”

Apparently referring to Egypt’s demand for the eviction of UN forces from Sinai but failing to mention that act, he goes on:

Thompson: “The Egyptians then re-took the southern tip of the Sinai peninsula and imposed a blockade on the Israeli port of Eilat. This amounted to a declaration of war since the Straits of Tiran were the Israelis’ only trade route to the eastern half of the world. Israel faced the prospect of war on three fronts: from Jordan in the east, from Syria in the north and from Egypt in the south. As the crisis deepened, on the 5th of June Israel pre-emptively attacked Egypt.

The Israelis’ first move was to take the Egyptian air force completely out of the picture by attacking its runways. The few planes that did get off the ground were no match for the Israeli fighters. The Egyptian air force was completely destroyed. In the Sinai Egypt had three times as many tanks as Israel but with no air cover, their cause was hopeless. Israel quickly took the Sinai and Gaza. Syria and Jordan joined in the war.”

Viewers are not told of the message sent by the Israeli prime minister Levi Eshkol to King Hussein of Jordan on June 5th 1967 asking him to refrain from hostilities.

Thompson: “When the battle ended they’d lost control not just of the Golan Heights and the West Bank but of East Jerusalem as well. The Israelis declared Jerusalem the new capital of the Jewish state.”

Jerusalem had in fact been Israel’s capital since 1948 and a law was passed in January 1950 to confirm that. Interestingly this educational video refrains from informing its viewers how Jordan came to have “control” over “the West Bank” and “East Jerusalem” or why Egypt was holding the Gaza Strip.

Viewers then hear a brief but unexplained reference to the pre-conflict threats of annihilation from Arab sources.

Morris: “Those Israelis who had thought that Arab states were about to overwhelm Israel and destroy it, as was enunciated in advance by the Arab radio stations, saw it as something miraculous. Religious Israelis saw it as a sort of a divine redemption and reoccupation of areas which had been the core areas of Jewish statehood: Judea and Samaria which had been the core of the Judean kingdoms.”

Thompson: “The war was over in six days. By its conclusion Israel’s armed forces had more than quadrupled the territory their country controlled. The war also provoked another exodus of Palestinian refugees who fled to camps in the surrounding Arab states. The 1967 war established Israel as the dominant military power in the region. The Israeli victory was so quick and so complete that the Arab states were left demoralised and discredited. They had huge numbers of soldiers but compared to the Israelis they were poorly equipped and poorly led.”

Ignoring the fact that the PLO had been formed on the initiative of the Arab League three years prior to the “Arab failure” of the Six Day War, Thompson states:

Thompson: “The Arab failure allowed the Palestinians’ own national movement, including the Palestine Liberation Organisation, to emerge as a major actor.”

Viewers then find Yezid Sayigh likewise promoting the inaccurate notion that the formation of the PLO was born out of the post-1967 ‘occupation’ while whitewashing the fact that its original charter of 1964 clearly stated that the ‘Palestine’ it intended to ‘liberate’ did not include “the West Bank in the Hashemite Kingdom of Jordan” or the Gaza Strip and its first attack had taken place in January 1965.

Sayigh: “People like Yasser Arafat started to organise rebellion and armed resistance against the newly occupying Israeli army and so they caught peoples’ imagination. They had demonstrated that the Palestinians could take their cause into their own hands. They could bear arms. They were no longer pitiful refugees. They were people who had dignity because they fought for their own rights and their destiny.”

Arafat: “We know that it is not easy…but we are ready to pay the price.”

Thompson: “The PLO was made up of political and armed groups with different ideologies. In the 1970s, under Arafat’s leadership, it became more extreme and carried out a series of attacks against Israeli and other targets. But there was little international sympathy for a cause promoted by hijacking and bombing.”

Viewers are not told that those PLO ‘attacks against Israeli targets’ included the murder of civilians in the 1970 Avivim school bus bombing, the 1972 Munich Olympics massacre, the 1974 Ma’alot attack and many others. The word terrorism is of course not used.

Thompson’s claim of “little international sympathy” is of course not supported by the fact that just six months after the 1974 Ma’alot attack in which 25 hostages – including 22 children – were killed, Arafat was received with applause at the United Nations General Assembly. That information is however not provided to this video’s audience.

This educational video gives British school students an incomplete view of a significant chapter of Middle East history while whitewashing the PLO’s beginnings and original agenda in a manner which steers viewers towards the erroneous belief that Palestinian “armed resistance” was a product of the Six Day War.