The sharing of false media reports was of course not among the discussed common interests.

Nevertheless, earlier this month, an Israeli news site, relying on an Arabic report from a media outlet which is partly Emirati-owned, published inflated figures about Arab approval of the normalisation.  The Hebrew misinformation then found its way into English-language media outlets.

CAMERA, together with its Arabic department, prompted corrections on the topic in English, Hebrew and Arabic. 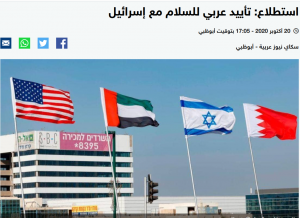 Sky News Arabia is partly owned by the Abu Dhabi Media Investment Corporation (ADMIC), headed by the Deputy Prime Minister of the United Arab Emirates, Prince Mansour bin Zayed Al Nahyan of the Abu Dhabi royal family. The prince currently owns half of Sky News Arabia, headquartered in Abu Dhabi, while Philadelphia-based Comcast owns other half (as part of the company’s control of the entire Sky network).

While the article correctly reported that most Emiratis (56 percent) and a minority among Palestinians (31 percent) consider normalisation with Israel before the Palestinian conflict is solved “desirable,” Sky erred concerning public opinion in Jordan, Saudi Arabia and Egypt (translation by CAMERA Arabic):

“Results show that 58 percent of Egyptians support peace. The rate reached 59 percent among both Saudis and Jordanians.”

The Zogby Analytics poll (page 20 and screenshot below) puts the figure for Egyptians who support normalisation with Israel prior to the resolution of the Palestinian issue (per the “Abraham Accords”) at 42 percent — not 58 percent, as reported. In addition, the Zogby poll found 41 percent of Jordanians and Saudis in support of normalisation, not 59 percent. The journalist conflated the figures for Jordanians, Saudis, and Egyptians who found normalisation with Israel without solving the Palestinian issue “undesirable” with those who found it “desirable.”

Subsequently, the Israeli daily Israel Hayom picked up the Arabic misreporting from Sky News Arabia, and in addition also contributed its own misreporting, understating Palestinian opposition to normalisation.

“According to the survey by US-based Zogby Analytics, 59% of Jordanians and Saudis, along with 58% of Egyptians and 56% of the residents of the UAE support normalisation with Israel, while 61% of Palestinians oppose it.”

The article itself repeats these numbers, stating:

According to the survey, 59% of Jordanians and Saudis, along with 58% of Egyptians and 56% of the residents of the UAE support the normalization agreements between Israel and the Arab world, citing primarily regional stability and economic prosperity.
The poll said that 61% of Palestinians opposed the normalization process.

In response to communication from CAMERA Arabic, on Oct. 20, Sky News Arabia amended its misleading headline, which now more accurately states: “Survey: Arab support for peace with Israel.” However, as of this writing, editors have yet to correct the erroneous reporting within the article itself which had inflated Egyptian, Saudi and Jordanian  support for normalisation prior to resolution of the Palestinian conflict.

According to the survey by US-based Zogby Analytics, 56% of the residents of the UAE and 41% of Saudis support the normalization agreements between Israel and the Arab world, as do 42% of Egyptians and 41% of Jordanians, while 69% of Palestinians oppose it.

Out all of the Arab, Israeli, and American media outlets that CAMERA contacted concerning inflated figures of the promising Zogby poll results, only one — The Washington Examiner — failed to make any effort to correct. The headline of Paul Bedard’s Oct. 16 Washington Secrets column erred: “Surprise: Majority of Arabs back Trump Middle East peace plan, 79% of Saudis.”

CAMERA alerted Examiner editors that while 79 percent of Saudis support the Arab Peace Initiative (which predated Trump’s presidency by more than a dozen years and is so unfavorable to the Israeli side as to be a complete non-starter), only 58 percent support the President’s “Peace to Prosperity” plan, and 41 percent support “Abraham Accords” normalisation.

But the politically-conservative American media outlet has failed to dial down the inflated figure of Saudi support for President Trump’s peace plan despite the fact that the real number is itself very good news.

An Arabic version of this post can be seen here.