As previously documented, a visit by the BBC Jerusalem bureau correspondent Tom Bateman to the village of Burqa in the Ramallah district resulted in reports on the BBC News website and, the following week, on BBC domestic radio.

The audio version of Bateman’s report aired on BBC Radio 4’s ‘Today’ programme on October 24th was also promoted twice on that day on BBC World Service radio. Listeners to the afternoon edition of ‘Newshour’ heard it (from 07:30 here) in the same format used earlier on Radio 4. 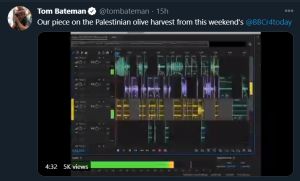 Listeners to the programme ‘Weekend’ heard the report ‘as is’ (from 17:24 here) followed by commentary from one of the programme’s studio guests, Oliver McTernan, who was introduced by presenter Paul Henley as:

“…co-founder and director of an organisation called ‘Forward Thinking’ which promotes peace and understanding in the Middle East – no small task.”

Nevertheless, listeners were not provided with any information concerning Forward Thinking’s funding, affiliations and “particular viewpoints” – not least the fact that McTernan and his colleagues are proponents of the view that being a terror organisation committed to Israel’s destruction should not disqualify Hamas from being part of negotiations to resolve the Palestinian-Israeli conflict.

When Bateman’s report ended, listeners heard the following: [emphasis in italics in the original, emphasis in bold added]

Henley: “Tom Bateman reporting. Quite a task for any conflict resolution team there, Oliver.”

McTernan: “It is and I think the biggest problem is how the international community ignores the reality of life in the occupied territories. You know this goes on not just at harvest time; it goes on throughout the year this…ahm…attrition between illegal settlers and people who own the land. I was surprised though to hear the lady say ‘oh we build settlements on land so long as it’s not owned by somebody’. Of course all the land in the occupied territory is owned.”

At that point listeners heard a jingle.

This is not the first time that BBC audiences have heard Israelis living in places of which the BBC disapproves as “illegal” and Henley’s failure to challenge McTernan’s phrasing once again suggests that the BBC has no qualms about branding particular people in that pejorative manner.

Neither did Henley challenge McTernan’s patently false claim concerning land ownership. Although there are lands which are privately owned by both Arabs and Jews in Judea & Samaria, much of the area is defined as ‘state land’.  While McTernan did not specify who exactly he believes owns “all the land in the occupied territory”, it is obvious that he does not think that it is Israel or Israelis and his earlier reference to “people who own the land” suggests that he erroneously considers the entire territory of Judea & Samaria to be under Palestinian ownership.

Clearly those statements from McTernan materially mislead BBC audiences – particularly in light of the failure to inform listeners of his political agenda – and yet no effort was made to correct the inaccurate impressions given.

BBC WIDENS ITS ‘ILLEGAL UNDER INTERNATIONAL LAW’ MANTRA TO INCLUDE PEOPLE