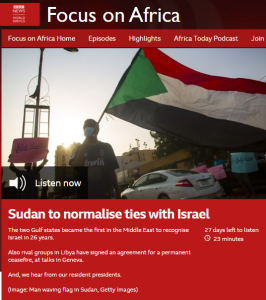 “A former Sudanese prime minister, Sadiq El Mahdi, says the US-brokered agreement between Sudan and Israel could help ignite a new war in the Middle East and jeopardize the authority of the transitional government.”

The same statement was likewise unquestioningly referenced in the introduction from presenter Julian Marshall  (from 00:12 here), once again without any explanation of how or why the agreement could, according to that claim, “ignite a new war in the Middle East”. 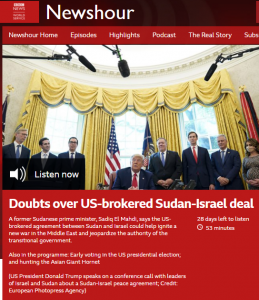 Marshall: “President Trump seemed rather more enthusiastic than Sudan that it was about to become the third Arab state to agree to normalise relations with Israel in a matter of months. Mr Trump made the announcement at the White House on Friday, shortly after rescinding Sudan’s listing as a state sponsor of terrorism. But since then Sudan’s foreign minister has said that any deal can only go ahead with the approval of what at the moment is a non-existent legislative council. And if the government is somewhat lukewarm, there’s been more open hostility inside Sudan. There’ve been street protests in Khartoum in support of the Palestinians while Sudan’s former prime minister Sadiq el Mahdi, who leads the country’s biggest political party, said the agreement could help ignite a new war in the Middle East and jeopardise the authority of the transitional government. That government, made up of civilians and soldiers, has been running the country after the overthrow of ling-time dictator Omar al Bashir last year.”

Marshall did not inform listeners that in the same statement, the quoted former prime minister also ‘accused Trump of being racist against Muslims and Black people, and described Israel as an “apartheid state.”’.

Marshall went on to conduct an interview with a Sudanese film maker who has been featured in BBC content in the past. Hajooj Kuka was introduced as having been “at the forefront of protests” which led to the overthrow of al Bashir. Kuka described himself as “shocked” by the announcement, claiming that it was beyond the mandate of the transitional government and describing it as “debatable in Sudanese society” because “most people are against the normalisation because they’re really strong with the rights of the Palestinian people” and opining that “normalisation should only happen after the Palestinian people get their rights”.

When asked by Marshall whether the Sudanese government was “steamrolled into this by President Trump” Kuka agreed, claiming that Sudan had been “manipulated” by Trump, Netanyahu and the UAE for “personal gain”.

Marshall’s final question to Kuka was to ask him what he would ask the next interviewee in the item – US official Brian Hook. Kuka’s question was “does he think forcing this on the people, is this the right way to go?”

At 08:21 Marshall introduced his second interviewee and asked his paraphrased version of Kuka’s question.

Marshall: “…let’s speak now to that senior US diplomat Brian Hook who until August of this year was a senior policy advisor to the US Secretary of State Mike Pompeo and is now an unpaid official helping Arab nations and Israel normalise relations. […] wouldn’t it have been better to have left this until Sudan had a democratic government in two years’ time?”

Hook referred to the former Islamist dictatorship in Sudan, the country’s massive debt, its removal from the list of terror sponsoring states and its process of ‘opening up to the world’ before Marshall repeated his talking point.

Marshall: “Why not wait until a democratically elected government gives its approval or otherwise to normalising relations with Israel?”

He went on to claim that “this feels very much like you’re trying to bump a rather vulnerable country into something that it’s not particularly keen to do”.

Hook responded that Sudan is a sovereign country which is “at perfect liberty not to normalise with Israel” and that asserted that Marshall was overstating America’s influence before Marshall interrupted him and a rather testy exchange ensued.

Hook: “Would you rather have Sudan be in an official policy of war with Israel? Is that a better outcome?”

Marshall: “Well you describe it as an official policy of war with Israel…”

Marshall: “OK, but it’s not as if it has resulted in open hostilities as far as I know.”

Marshall: “As far as I know the two countries co-exist. Mr Hook it is now me speaking and that is my statement.”

Hook: “I don’t know who you have researching Sudan. Sudan has been in an official policy of belligerence and war with Israel since 1967.”

Shortly after that, Marshall cut off his interviewee – while claiming not to be doing so and using the excuse of being “out of time”.

Not only did BBC audiences clearly not get to hear Mr Hook’s full perspective on the story but they were informed by Julian Marshall that Israel and Sudan “co-exist” without “open hostilities”.

Obviously those claims from Marshall mislead audiences with regard to Sudan’s past record of military ties to Iran which have included the smuggling of Iranian weapons shipments to Hamas in the Gaza Strip via that country. Marshall’s erasing of examples such as the Karine A weapons shipment in 2002 and the Klos C shipment in 2014 impede audience understanding of the story, which is of course particularly notable given the BBC’s previous reporting on alleged Israeli airstrikes in Sudan.

While Newshour’s chosen framing of this story is amply apparent, it clearly does not provide worldwide BBC audiences with a comprehensive view of the topic.