Previously (see ‘related articles’ below) we have looked at four videos created by the BBC in 2004 (and still available in the UK) within the framework of its ‘Bitesize’ online study support resource which includes material relating to the GCSE exams taken by high school students in parts of Great Britain and Northern Ireland.

One of the sections offered under the history category is titled ‘The Middle East class clips’ and it includes seven videos. The fifth video (chronologically) is titled “The Yom Kippur War”. 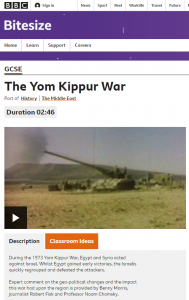 Previously that same video appeared on another BBC educational site called ‘Learning Zone’ which was closed in 2015. Between 2004 and 2013, the accompanying synopsis stated that “During the 1973 Yom Kippur War, Egypt and Syria acted pre-emptively against Israel at the Suez Canal.” [emphasis added]. That inaccurate claim was removed in 2013 following a post at CAMERA UK’s predecessor site BBC Watch.

Like the previous videos, this one too is presented by the former BBC Northern Ireland journalist Noel Thompson. The academic outside contributors to this video are Benny Morris “Professor of Middle Eastern Studies, Ben-Gurion University” and Noam Chomsky “Professor of Linguistics and Philosophy MIT”. As was the case in one of the previously discussed videos aimed at 14 to 16 year-olds, viewers are not informed of the anti-Israel activities of Noam Chomsky.

The third contributor to this BBC educational film is not an academic but a journalist. Robert Fisk – who is presented as “Middle East correspondent, the Independent” – had established his anti-Israel animus well in advance of his participation in this BBC production but nevertheless was chosen to appear as one of the supposedly neutral ‘experts’ explaining Middle East history to British schoolchildren.

“During the 1973 Yom Kippur War, Egypt and Syria acted against Israel. Whilst Egypt gained early victories, the Israelis quickly regrouped and defeated the attackers.

Expert comment on the geo-political changes and the impact this war had upon the region is provided by Benny Morris, journalist Robert Fisk and Professor Noam Chomsky.”

The video opens with footage of a funeral and the misleading claim that Sadat “was willing to trade land for peace”. Sadat of course had no intention of trading any land: his aim was to make Israel do so.

Thompson: “In September 1970 President Nasser of Egypt died suddenly. Nasser’s successor, Anwar Sadat, made overtures of peace to Israel. Sadat was willing to trade land for peace. He wanted the Sinai back. The Israeli government found it hard to believe their arch-enemy’s offer was on the level.”

Morris: “They didn’t understand that a) Israel’s retention of the territories forever was impossible and b) I think they suspected the Arabs of lack of real will, of lying, very simply. They didn’t believe that Sadat, who now said he wanted peace – or was saying it not publicly but saying it through diplomatic channels – they didn’t believe he was sincere.”

That potted version of events gives viewers an overly simplistic view of Sadat’s 1971 plan. Five days after Sadat made a speech outlining his initiative, the JTA reported that:

“The Israel government is believed to be giving serious consideration to a proposal by President Anwar Sadat of Egypt to reopen the Suez Canal on the basis of a partial withdrawal of Israeli forces from its east bank. Israel’s position is expected to be stated by Premier Golda Meir on Tuesday in the course of a political report to the Knesset. Her Knesset speech was announced following today’s Cabinet meeting at which Foreign Minister Abba Eban reportedly presented a detailed analysis of the statement Sadat made to the Egyptian National Assembly last Thursday. […]

Several Cabinet ministers intimated today that it would be worth while at least to explore the Egyptian proposal and some of the major questions arising from it. They said, for example, Israel wants to know what Sadat means by partial withdrawal–whether 100 miles or 100 yards; whether Egypt would agree to the de- militarization of any area evacuated by Israel; and whether the waterway could be used by Israeli shipping once it is reopened. […]

In addition, the chairman of the Knesset’s powerful Defense and Foreign Affairs Committee, Chaim Tzadok, declared today that President Sadat’s proposal “should not be rejected out of hand.” Diplomatic circles mean while stressed that there was no substance to a report broadcast yesterday by the government -owned but independent Kol Israel radio that Israel had totally rejected Sadat’s proposal. […]

Transport Minister Shimon Peres told the Civilian Emergency Transportation Committee last night that Israel must beware of attempts to force it into anything less than a contractual peace agreement with Egypt. Peres said such a development would mean another war.”

In July 1971 the New York Times reported that:

“President Anwar el‐Sadat declared tonight that he would not allow 1971 to lapse without a decision for war against Israel unless agreement was achieved for a withdrawal by Israeli troops from all Arab territories occupied in 1967.

“We are ready to sacrifice one million of our people as victims in this battle,” he warned.

The frustrating state of “no war, no peace” cannot be permitted to continue beyond this year, he vowed in a speech to the opening session of the national congess of the Arab Socialist Union, Egypt’s only political organization.”

The Jewish Virtual Library notes that:

“Throughout 1972 and for much of 1973, Sadat threatened war unless the United States forced Israel to accept his interpretation of Resolution 242 — total Israeli withdrawal from territories taken in 1967. […]

In an April 1973 interview, Sadat again warned that he would renew the war with Israel. But it was the same threat he had made in 1971 and 1972, and most observers remained skeptical.”

The BBC’s version of events, however, frames the outbreak of war as the result of Israel’s failure to accept Sadat’s proposals.

Thompson: “When this was ignored by Israel and the US, Egypt and Syria decided to act to break the stalemate.”

Failing to explain to viewers the significance of Yom Kippur – the holiest day in the Jewish calendar – Thompson goes on:

Thompson: “In 1973 they launched major offensives against Israel on the Jewish festival of Yom Kippur. The Egyptians drove the Israelis from the Suez Canal.”

Fisk: “The ’73 war, the crossing of the Suez Canal, the taking of Israeli prisoners, was a unique moment in both the history of the Arabs – Egypt in particular – and also of course for the Israelis. I’ve met Egyptians who say ‘I couldn’t believe it. I turned on the television and there were Israeli prisoners. They could be taken prisoner too’. And there’s no doubt that militarily the crossing of the Suez canal in ’73, the enormous military preparations and the secrecy behind the operation were a remarkable military victory for a people – the Arabs – who were famed for losing wars.”

Unsurprisingly to anyone familiar with his record, Fisk’s contribution reflects the Egyptian view of a war it considers a ‘victory’.

Viewers then see a similarly partisan account from Noam Chomsky in which he attributes to Israel a patronising stance which, notwithstanding Israel’s intelligence failures prior to the war, is not supported by the documented facts.

Chomsky: “It was pretty well taken for granted in both Israel and the United States that the Arabs weren’t…weren’t to be taken seriously. They didn’t have to worry about them. And Egypt was regarded as a kind of basket case. That was the great mistake in Israel and it’s greatly regretted. It almost led to their destruction.”

Thompson: “But the Israelis quickly regrouped and counter-attacked. They routed the Egyptians in the Sinai desert and turned back the Syrians in the north. It was another victory for Israel but the war left it even more dependent on the US for military, economic and diplomatic support. The prospect for peace seemed further away than ever.”

Once again we see British schoolchildren given a very superficial BBC account of an important chapter in Middle East history which is not enhanced by its reliance on “expert comment” from inadequately presented outside contributors with a known anti-Israel stance.