Last month we documented a BBC report in which readers were told that Hizballah:

“…is designated a terrorist organisation by several Western states and Israel.”

As noted at the time, that portrayal did not give readers a complete picture of the designation of Hizballah – entirely or in part – as a terrorist organisation. Members of the BBC’s audience searching for more information on that topic in the corporation’s online profile of Hizballah would find the following:

That profile has not been updated since 2016 and hence does not reflect more recent developments, which have received limited BBC coverage. 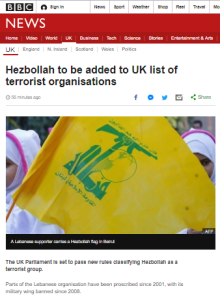 In July 2019 it covered Argentina’s designation of Hizballah. (discussed here)

In August 2019 Paraguay’s designation of Hizballah was reported on BBC World Service radio but not on the BBC News website – the corporation’s “permanent public record”.

In April 2020 the BBC News website reported Germany’s ban on Hizballah as a whole. (discussed here and here)

Additional recent designations of Hizballah which have not been reported on the BBC News website include:

On October 27th the Czech parliament passed a resolution calling for the republic’s government “to declare all of Hezbollah a terrorist organisation and to push the European Union to end its artificial division of the Lebanese group into a military and a political wing”.

For years the BBC has downplayed the subject of Hizballah’s designation as a terrorist group, providing serially incomplete information to its audiences. As the circle of countries and organisations that proscribe Hizballah widens both in numbers and geographically, it is obviously high time for the BBC to improve its approach and begin to report the extent of those designations accurately and fully.