In 2012 the Economist published an article which includes the following paragraphs:

“Many assume that balance is a key element of good journalism. Fresh-faced journalism students often arrive with the dewy-eyed aims of pursuing the truth and preserving balance and objectivity. Objectivity is easy to dismiss. It just doesn’t exist. There, I’ve said it. But balance is a trickier beast. Balance can be a great asset in an article. It can also be ruinous.

The problem of balance is neatly explained by a British hack, Nick Davies, who wrote a seminal (and underrated) book on falsehood, distortion and propaganda in journalism called “Flat Earth News”. Mr Davies does a bit of teaching, and he has his students imagine that they are asked to write a report on what the weather will be like tomorrow. They interview a woman in one room who says it will be sunny. Then they interview a man in another room who says it’s going to rain. Your job, as a journalist, is not to simply write up what you have been told, he says. Your job is to look out the window.

Writing a “balanced” version of this story would produce an article that reads “he says it will rain” but “she says it won’t”. You have all these quotes fluttering around like “butterflies in a jar”, going nowhere. But there is a bigger danger lurking. What if the man who says it is going to rain is lying? What if he is an umbrella salesman? Your options are to either make a judgment about the truth, or print what you have been told. But if you balance an article when you know that all the evidence points to a sunny day tomorrow, then you are participating in a denial of truth.”

Bearing that in mind, let’s take a look at BBC News website coverage of Jeremy Corbyn’s recent suspension from the UK Labour party on its ‘UK Politics’ page. 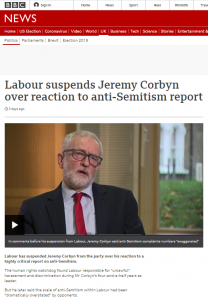 On October 29th the website published a report headlined “Labour suspends Jeremy Corbyn over reaction to anti-Semitism report” in which readers were told that:

“Labour has suspended Jeremy Corbyn from the party over his reaction to a highly critical report on anti-Semitism.

But he later said the scale of anti-Semitism within Labour had been “dramatically overstated” by opponents.”

“Responding to the EHRC’s findings, Mr Corbyn said he was “always determined to eliminate all forms of racism”.

He claimed his team had “acted to speed up, not hinder the process” and that the scale of anti-Semitism within Labour had been “dramatically overstated for political reasons by our opponents inside and outside the party”.

The problem is that at no point in this report – including in the analysis from the BBC’s political editor – were readers informed whether or not Corbyn’s claim that the scale of antisemitism within Labour had been “dramatically overstated for political reasons” is true.

The following day, the website published an article by BBC News online political reporter Jennifer Scott titled “Why was Jeremy Corbyn suspended from the Labour Party?” which repeated the same ‘he said-she said’ formula. 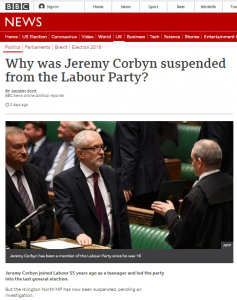 “The [EHRC] report was published at 10:00 GMT on Thursday. Around 30 minutes later, Mr Corbyn put out a statement.

He said anti-Semitism was “absolutely abhorrent” and “one anti-Semite is one too many” in the party.

But he then said: “The scale of the problem was also dramatically overstated for political reasons by our opponents inside and outside the party, as well as by much of the media.”

After another 30 minutes or so, Mr Corbyn’s successor as Labour leader, Sir Keir Starmer, made his own statement.

He said those who believed the issue of anti-Semitism in the party had been “exaggerated” or were a “factional attack” were also “part of the problem and… should be nowhere near the Labour Party”. […]

…after the new leader’s speech, Mr Corbyn sat down with a TV reporter to be asked about the EHRC’s findings.

He was questioned on Sir Keir’s statement and whether he stood by his own response that the issue had been “dramatically overstated”.

Mr Corbyn repeated that “one anti-Semite is too many”, but then said the number of complaints had been “exaggerated”.

Six minutes after the clip aired, Labour released a statement saying they had suspended Mr Corbyn from the party. […]

Speaking after his suspension, Mr Corbyn said he would “strongly contest” what he called a “political intervention”.

He added: “I’ve made absolutely clear that those who deny there has been an anti-Semitism problem in the Labour Party are wrong.

“It’s also undeniable that a false impression has been created of the number of members accused of anti-Semitism, as polling shows: that is what has been overstated, not the seriousness of the problem.””

Once again that BBC report made no effort to inform readers whether or not Corbyn’s claims are accurate.

“Sir Keir Starmer has defended Labour’s decision to suspend Jeremy Corbyn from the party after the former leader’s reaction to a report on anti-Semitism. […]

Mr Corbyn said the scale of Labour anti-Semitism had been “dramatically overstated” by his opponents.

This comment prompted Labour to suspend Mr Corbyn from the party. […]

In his response to the EHRC’s findings, Mr Corbyn said he had “acted to speed up, not hinder the process” of dealing with complaints, but the scale of anti-Semitism within Labour had been “dramatically overstated for political reasons by our opponents inside and outside the party”.

Sir Keir said those who believed the issue of anti-Semitism in the party had been “exaggerated” should “be nowhere near the Labour Party”.”

Neither the report nor the accompanying analysis from BBC political correspondent Chris Mason made any effort to inform readers whether Corbyn’s claims have any factual basis.

Also on the same day, the BBC News website published a report headlined “Anti-Semitism row: Corbyn allies urge members to stay in the party” which highlighted statements from Corbyn’s supporters but yet again – including in analysis from political correspondent Helen Catt – failed to inform readers whether or not the statements which led to his suspension are accurate. 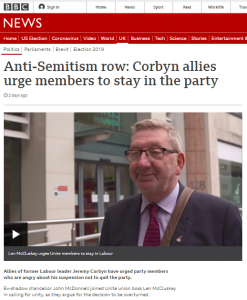 Moreover, the BBC found it appropriate to unquestioningly amplify the following: [emphasis added]

“Many have used social media to share their intention to end their membership subscriptions, including Andrew Cassidy, 44, from near Glasgow, who has been a Labour member for 10 years.

“The facts, as far as I see them, are that Jeremy Corbyn has shown a lifelong distaste for racism of any bent,” he told the PA news agency.

“Being pro-Palestinian is conflated as anti-Semitism, both by the mainstream media and now by Labour Party grandees.”

He described Mr Corbyn as “a good man” who had been “hung out to dry in order to distance (Sir Keir) Starmer’s Labour from the progressive, inclusive party that Corbyn aimed for”.”

In short the BBC News website published four items including contributions from experienced political reporters not one of whom (in contrast to their colleagues at Channel 4) was able – or willing – to inform BBC audiences whether or not the claims made by Jeremy Corbyn which led to his suspension from the Labour party have any factual merit. All those BBC correspondents preferred to bring their readers false balance in the form of ‘he said-she said’ statements rather than ‘looking out of the window’.