Robert Fisk died on Friday, the news of which elicited considerable praise by some of his fellow journalists owing to his long career as a Mid-East correspondent.  The laudatory quotes and articles included a few comments addressing accusations of antisemitism against the long-time Indy journalist.

I was extremely proud to work with Bob during our time at The Independent. Great reporter, great writer, great man. And very funny. As for his critics: anti-Israel, antisemitic? No frigging way. I never heard Bob put down the Israeli people or their religion. He was against the worst Israeli policies, as we all should be. Period.

In the i newspaper yesterday, former Indy editor Simon Kelner wrote the following

He was particularly critical of the policies of the Israeli government, and as a result he had to face down repeated, unfounded accusations of anti-Semitism.

As his editor, and being Jewish myself, I was often taken to task by the pro-Israel lobby for what they believed to be biased reporting. (On this point, it is curious that one of the eight recordings he chose on Desert Island Discs was a stirring rendition of the Israeli National Anthem, the Hatikvah).

As our posts have demonstrated, he possessed what can more accurately be described as a malign obsession with Israel.  However, even being obsessively critical of Israel isn’t necessarily evidence of antisemitism.  The only evidence in our view worthy of examination is the question of whether journalists or commentators have actually employed antisemitic tropes – “antisemitic” as defined by the IHRA Working Definition.

In this regard, the evidence is clear.

In 2019, we posted about an Indy piece by Fisk which unleashed the kind of unfiltered venom fancied by unabashed bigots in charging the media with “grovelling, cowardly, craven obeisance” to Israel”, accused the US Congress of being “in thrall” to Jerusalem, and concluded that the Jewish state has  “annexed America”.  (The original headline charged that “Israel controls America”.)

Indeed, Fisk’s use of the ‘Jewish control’ narrative goes back many years.

Here’s the cover page of the article – published when Simon Kelner was editor. 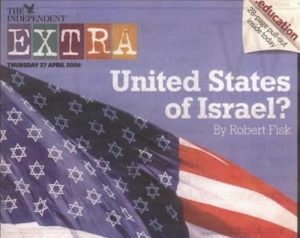 In the article, Fisk, in his own words, using language indistinguishable from that of far-right anti-Semites, charged that the the Israel lobby represents an unstoppable force that has a “stranglehold” on the US Congress, and tells US Presidents what to do.  As Professor David Hirsh wrote in a contemporaneous piece examining Fisk’s article, “The Lobby” is presented [by Fisk] as an unopposable…force” whose “tentacles reach into theatres, TV stations and newspapers”.

Nor is Fisk’s use of antisemitic rhetoric limited to this specific narrative.

In 2018, Fisk peddled the ‘dual loyalty’ trope in complaining that several Jewish officials in the Clinton administration negotiating Israeli-Palestinian peace couldn’t be trusted to be fair due to their religious background.

Fisk, argued the late antisemitism scholar Robert S. Wistrich, even flirted with classic Christian antisemitism in a 2006 piece which played off the theme of the Old and New Testaments to expose Jewish/Israeli intransigence:

The rabbi’s dad had taught him [the settler] about an eye for an eye—or 20 homes for one stone in this case—whereas my dad had taught me about turning the other cheek. Judaism and Christianity had collided. So was it any surprise that Judaism and Islam were colliding?

The burden is on defenders of Fisk to explain why his evocation of tropes about Jewish perfidy, power, and dual loyalty that we’ve documented do NOT cross the line to antisemitism.