The November 2nd BBC Radio 4 programme titled “The Most Successful Assassination in History” (which will remain “available for over a year”) is described by its writer and presenter Jonathan Freedland as follows in its opening minutes: [emphasis in italics in the original] 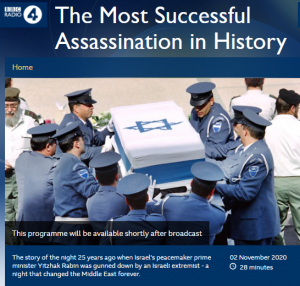 Freedland [02:08]: “This is the story of the murder of Yitzhak Rabin, the prime minister of Israel who was gunned down on the 4th of November 1995. […] It’s a story of panic and chaos, centred on a man who seemed on the verge of transforming the Middle East, of forging a lasting peace between Israelis and Palestinians. The man who shot him wanted to stop that process in its tracks and – 25 years on – there is indeed no peace. It prompts a grim question: was this the most successful assassination in history?”

Throughout the programme Freedland makes no effort to examine or question his very debatable underlying assumption that had Rabin lived, “a lasting peace” would have prevailed. Yitzhak Rabin’s own daughter expressed a more cautious view in an interview given five years ago.

“The Times of Israel: I want to ask you, 20 years later, about how things might have unfolded with the Palestinians had your father lived. Would things have turned out differently?

Dalia Rabin: In terms of the Palestinians, it’s very hard to give accurate assessments. Because from the very beginning they were not easy partners. They were not definitive.

There was a feeling that some kind of connection of trust was built between Arafat and Yitzhak Rabin. Which was all in all something very fragile. Because if you are looking at the big picture, Arafat in 1995 was thought to be someone who could “supply the goods” if he wanted to, and could have stopped Hamas, but he didn’t do it! We had the revolving door policy (of prisoner releases by Arafat of terrorists). And the waves of terror hit the peace process, undoubtedly. And that increased the internal opposition among us, and the feeling that this process was costing us blood.

Now, it didn’t deter Yitzhak Rabin, but I have the feeling that he wouldn’t have let it continue. There would have been a stage where he would have decided: We’re in a phased process. Let’s evaluate what we have achieved and what the price has been. He wouldn’t have stopped Oslo, but he would have done what Oslo enabled him to do: to look at it as a process and assess whether it was working.”

Freedland’s portrayal of the Palestinian terrorism which increased after the signing of the Oslo Accords is as follows:

Freedland [04:26]: “But for many Israelis the price was too high, the risk too great. […] That felt especially true when Palestinian extremists – groups like Hamas or Islamic Jihad – sought to sabotage the Oslo process by putting suicide bombers on buses, killing dozens of Israeli civilians. Rabin tried to calm the public’s nerves but the opposition got louder and louder.”

Between the signing of the Oslo Accords in September 1993 and Rabin’s assassination in November 1995, the number of people (Israelis and foreign nationals) murdered in terror attacks was in the hundreds rather than “dozens”.

Notably, Freedland has nothing to tell his listeners about the peace rejecting agenda of those he describes as “Palestinian extremists” or the failure of the PLO signatories to the Oslo Accords to put a stop to their terrorism. Had he done so, listeners may have been better placed to understand his subsequent portrayal of Israeli public opinion:

Freedland [08:29]: “But by the autumn of 1995 the pursuit of peace was becoming a hard sell. Too many Israelis saw the creation of the Palestinian Authority as a dangerous mistake. An armed Palestinian police force operating in territory the Israeli right regarded as their own. The only change they could see was that bombs were going off and Israelis were dying.”

Freedland’s portrayal continues with a reference to an event he has previously misrepresented:

Freedland [09:24]: “This then was the atmosphere in November 1995. Rabin’s coalition was fraying, its popularity hanging by a thread. The rhetoric at the anti-Rabin rallies was getting hotter. At one event they staged a mock funeral procession, carrying a coffin. At another there was a hangman’s noose. Present on each occasion was the then leader of the opposition, Binyamin Netanyahu.”

Although he does not specifically claim that the coffin was “a mocked-up coffin of Rabin” as he did in an article he wrote for the Guardian in 2015, Freedland also does nothing to prevent listeners from reaching that erroneous conclusion.

Later he turns to the topic of the election held six months after Rabin’s assassination, by which time Palestinian terrorism had claimed over sixty more Israeli lives.

Freedland [24:55] “Rabin’s former political advisors were convinced that the Israeli public would see it the way they did; that in the immediate aftermath of Rabin’s murder, voters would turn against the Right and against Binyamin Netanyahu, the leader of the main opposition party.”

Freedland [26:06]: “Binyamin Netanyahu has been Israel’s prime minister on and off ever since. He’s still in the job now. Over the last 25 years the Right or centre-Right have been in charge for all but 20 months.”

Freedland’s reference to “20 months” apparently means the government led by Ehud Barak from July 1999 to March 2001. Interestingly, he fails to inform audiences that Barak’s government fell apart because of the violent Second Intifada instigated by Oslo Accords signatory Yasser Arafat.

Freedland: “Never again could Israel find a leader willing to give up land for the sake of peace with enough political credibility and skill to deliver it. Occasionally a politician will talk of managing the conflict with the Palestinians but peace, the word is rarely uttered these days.”

Events hidden by Freedland from audience view include Netanyahu’s signing of the 1998 Wye River Memorandum and the 1997 Hebron Agreement which obligated Israel to further territorial withdrawals, Ariel Sharon’s 2005 withdrawal from the Gaza Strip and parts of Samaria, Ehud Olmert’s 2008 peace offer which was rejected by Mahmoud Abbas, the 2009/10 building freeze and the 2013/14 negotiations – both under a Netanyahu government.

Jonathan Freedland’s agenda in this programme is amply clear and – given his past record – hardly surprising. He seeks to persuade BBC audiences that the assassination of Yitzhak Rabin – and that alone – destroyed the chances of “a lasting peace between Israelis and Palestinians” and a ‘transformed’ Middle East. He firmly places the blame for both the assassination and the failure to reach any agreement to this day with one political camp in Israel, while airbrushing the decisions made by the Palestinian leadership and absolving it of all agency and responsibility.

Freedland’s politicisation of the topic of Rabin’s murder would have been more comprehensible to BBC Radio 4 audiences had they been informed (in accordance with BBC editorial guidelines on impartiality) of his “particular viewpoints” on Israeli politics and had they been told that the named producer of the programme and founder of the credited production company Tuning Fork Productions – Freedland’s wife Sarah Peters – is listed as a trustee for the UK branch of the New Israel Fund – an organisation with a very specific political agenda vis-à-vis Israel.

Clearly the failure to provide audiences with that relevant information concerning the affiliations of the producer of this programme about Israel compromises BBC impartiality.

ONE TO LISTEN OUT FOR ON BBC RADIO 4