An article by the Guardian’s Jerusalem correspondent Oliver Holmes (“Israeli forces leave 41 children homeless after razing Palestinian village, UN says”, Nov. 5) omitted important context that would have provided readers with a much clearer understanding of the story.

Here are key paragraphs from the article:

Israeli forces in the occupied West Bank have razed a Palestinian village, leaving 73 people – including 41 children – homeless, in the largest forced displacement incident for years, according to the United Nations.

On Wednesday, families from the village were seen rifling through their wrecked belongings in the wind, with some of the first rain of the year arriving the same day. The UN published a photo of a bed and a cot in the open desert.

The village is one of several Bedouin and shepherding communities in the Jordan Valley area that is located within Israeli-declared army training “firing zones”, and despite being within the Palestinian Territories, people there often face demolitions for a building without Israeli permission.

However, despite the Guardian’s claim that the the Bedouin encampment was an “Israeli-declared army training firing zone despite being within Palestinian Territories“, they fail to note that the encampment is actually within Area C, the part of the West Bank (in the Jordan Valley) under full Israeli civil and military control per the Oslo Accords.  This contradicts Holmes’ implicit message that the IDF firing zone was on Palestinian controlled land.

Remarkably, this information omitted by Holmes  was included by, of all outlets, Al Jazeera, in their Nov. 4th article on the incident:

The Jordan Valley is home to approximately 60,000 Palestinians, according to the UN, but nearly 90 percent of the land is part of what is known as Area C, the three-fifths of the West Bank that is under complete Israeli control.

Though the current status of the remainder of these tent-dwelling Bedouin displaced by the eviction is unclear, the Guardian’s use of the evocative word “homeless” is likely inspired by the highly politicised NGO B’tselem, which seems to lazily use the word without verification as to the actual status of the Palestinians in question.

At the very least, readers should view with great skepticism the Guardian’s use of the term “homeless” in this context.

Further, though Holmes quotes COGAT noting that authorities had carried out an “enforcement activity… against seven tents and eight pens which were illegally constructed in a firing range located in the Jordan Valley”, he fails to note that Israel’s Supreme Court ruled that its residents have no property rights in the location (i.e. the land does not belong to them).

Moreover, previous Israeli court cases on the same issue were heard in 2011 and 2014, and the petitioners lost in all cases.

The Guardian reporter clearly made no effort to research the legal history of the Bedouin claims – information that helps put the story in proper context.  Nor did he bother to note that at least some of the structures in the illegal encampment were built via foreign funding – including from the EU and UK: 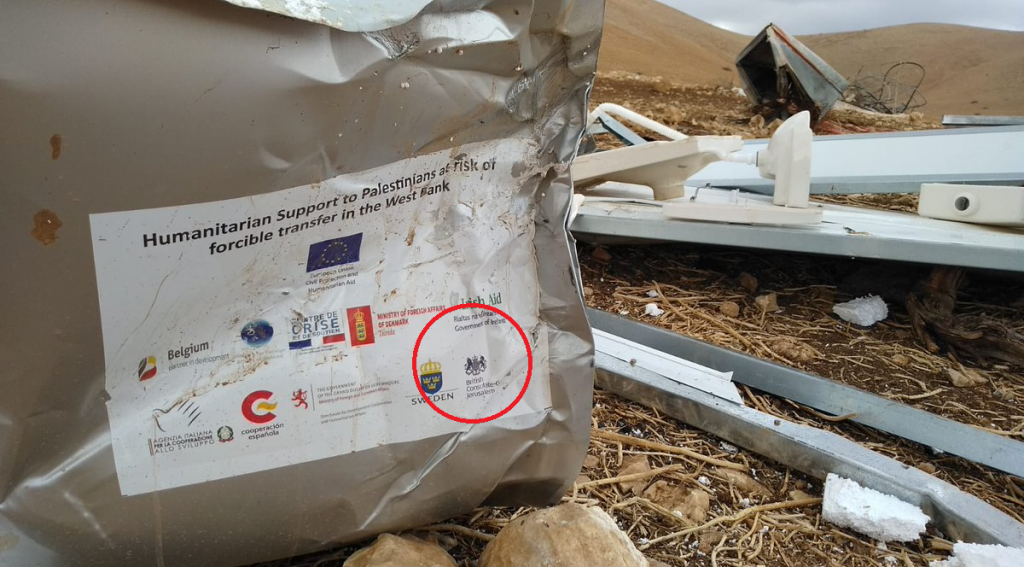 The Guardian misleads further in the article’s penultimate sentence:

Israel captured the West Bank from Jordanian forces in 1967 and continues to control and occupy the area, although Palestinians have limited self-rule over small enclaves.

Palestinians don’t have “limited self-rule over small enclaves”.  They have military and administrative rule over territory in the West Bank that’s home to the overwhelming majority of Palestinians.

Once again, the Guardian chose to publish a highly emotive and highly misleading article advancing the Palestinian narrative of an incident, instead of providing balance, nuance, context and – most of all – those facts which contradict the desired narrative.