The November 7th edition of the BBC Radio 4 ‘Today’ programme included a speculative item about possible changes in US foreign policy under a president-elect who only made his victory speech over half a day later.

Presenter Mishal Husain introduced the item (from 01:14:36 here) as follows:

Husain: “So what might Joe Biden want a presidency to achieve? John Brennan is a former director of the CIA, someone who knows Mr Biden well while he was President Obama’s vice president. He’s just published a memoir called ‘Undaunted: My Fight Against America’s Enemies, at Home and Abroad’. He stepped down as director of the CIA just as President Trump took office in January 2017 and I asked him when we spoke first what he would expect from a President Biden.”

As we all too often have cause to note on these pages, BBC editorial guidelines on impartiality state:

Especially given that Husain’s introduction suggests that the interview was pre-recorded, one would have expected her to give listeners some idea of the relevant issue of her interviewee’s acrimonious history with Donald Trump – particularly in light of commentary such as the following:

Husain: “So what would he [Biden] do differently on Syria, for example, compared to President Trump? How would he deal with President Assad and the ongoing situation in Syria?”

Brennan: “Well I think he would maintain the coalition that the Obama administration pulled together in the last year or so of its presidency. But I think he’s also going to make it very clear to Bashar Assad that authoritarianism is not something that the United States is going to favour and support and endorse. Unfortunately Donald Trump I think has sent a signal to authoritarian leaders around the world that it’s OK to do these types of things and the United States is not going to speak out against the injustices and atrocities that have been perpetrated on innocent people, whether it be in Syria or other countries.” 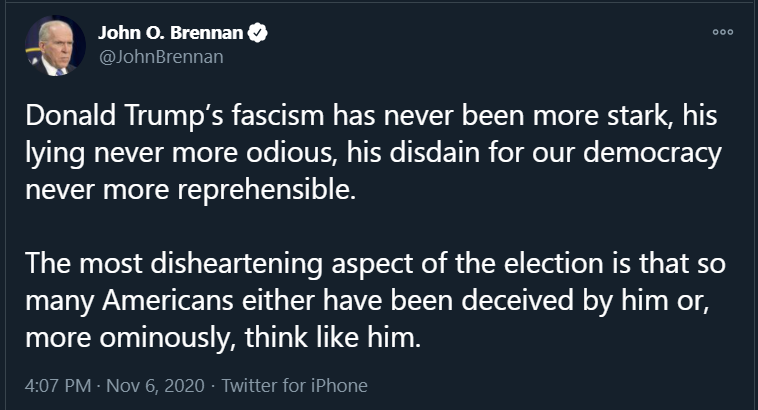 Moreover, one would have expected some clarification of the interviewee’s “particular viewpoint” on Israel before Husain raised the topic at 01:18:25.

Listeners did not get an explanation as to why Husain apparently believes that the Palestinians should have been involved in an agreement between Israel and another country.

Brennan: “Well absolutely they were. The Palestinian people for too long have not had the opportunity to govern themselves. And I think Joe Biden is going to continue to pursue a two-state solution and therefore try to ensure that Israel recognises that they have responsibilities to try to make the lives of the Palestinians better, including in terms of self-determination. So I think Joe Biden again is going to be following some of the pursuits that President Obama engaged in during his presidency but maybe with an additional vigour because the Palestinian rights really continue to be, I believe, trampled.”

Whether or not Joe Biden will indeed take the same approach as Obama of course remains to be seen but Mishal Husain certainly should have reminded her listeners that in 2014 Mahmoud Abbas rejected the Obama administration’s framework for peace talks.

That, however, would clearly not have enhanced the narrative Husain and her interviewee strove to promote in this item.