Headlined “Iran denies al-Qaeda leader was killed in Tehran”, the report originally informed readers that “Iran has denied a report that a leader of terrorist group al-Qaeda was killed in its capital Tehran in August” but the word ‘terrorist’ was subsequently changed to ‘militant’. 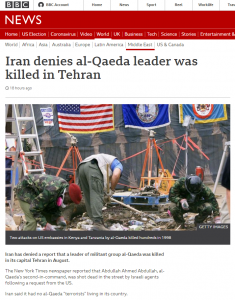 “Iran has denied a report that a leader of militant group al-Qaeda was killed in its capital Tehran in August.

The New York Times newspaper reported that Abdullah Ahmed Abdullah, al-Qaeda’s second-in-command, was shot dead in the street by Israeli agents following a request from the US.

Iran said it had no al-Qaeda “terrorists” living in its country.”

Readers were also informed that:

“…Iran’s foreign ministry denied the report on Saturday, saying: “From time to time, Washington and Tel Aviv try to tie Iran to such groups by lying and leaking false information to the media in order to avoid responsibility for the criminal activities of this group and other terrorist groups in the region.”

“Any link between Iran and al-Qaeda would be highly unusual – the two sides have fought each other in conflicts, and represent the two main and sometimes opposing groups of Islam – Iran is largely Shia Muslim, while al-Qaeda is a Sunni jihadist group.”

The BBC refrained however from reminding readers that Iran supports and finances Hamas and the Palestinian Islamic Jihad – both Sunni groups.

So are there in fact any Al Qaeda members living in Iran? The Washington Post (using one of Abdullah’s aliases) made considerably more of an effort to clarify for its readers the facts behind the Iranian claim that there are not than did the BBC News website.

“Iran, a Shiite Muslim theocracy whose ideology is at odds with that of Sunni Islamic groups such as al-Qaeda, has long denied it has harbored al-Qaeda, though top leaders such as Masri fled from Afghanistan after the 2001 terrorist attacks and sought refuge there. The Washington Post first reported in 2003 that Masri was in Iran. […]

Many of al-Qaeda’s senior commanders have been sheltered in Iran, though one by one, they have been killed in recent years. With Masri’s death, the only remaining member of al-Qaeda’s shura council — its core leadership — with operational al-Qaeda terrorist experience is Saif al-Adel, who is believed still to be in Iran.”

Linking to an article he wrote in 2015 Thomas Joscelyn of the FDD’s ‘Long War Journal’ noted that: 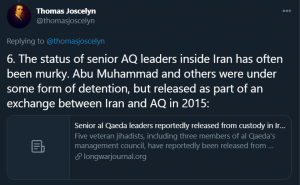 Joscelyn also linked to an article from 2018 in which he wrote that:

“On Aug. 8, the US State Department announced that it had increased its reward for information concerning the whereabouts of two senior al Qaeda figures. The two “key leaders” are al Qaeda veterans, Abdullah Ahmed Abdullah and Saif al-Adel, both of whom have been wanted since 1998. […]

The US first indicted the pair in Nov. 1998, after they were implicated in the American embassy bombings in Kenya and Tanzania several months earlier. Those attacks were al Qaeda’s most devastating prior to 9/11, killing 224 civilians and wounding thousands of others.

But according to an al Qaeda operative in Syria, the two al Qaeda managers were operating inside Iran as of last year. They were even reportedly acting as Ayman al Zawahiri’s chief deputies while living on Iranian soil. In that role, they were asked to weigh in on a fierce disagreement between jihadists in Syria.

This assessment was confirmed by the United Nations in a newly-released report. The UN found that Ayman al-Zawahiri and his “lieutenants based in the Islamic Republic of Iran were able to influence disputes among the fighters in Idlib,” Syria.

The UN names these lieutenants as Saif al-Adel and Abu Muhammad Al-Masri. The latter figure is Abdullah Ahmed Abdullah, as Abu Muhammad al-Masri is one of his well-known aliases.

Both men are currently playing key roles in al Qaeda’s global network — from inside Iran.”

Unfortunately for BBC News website readers though, the anonymous writer of this report made do with unquestioning amplification of the Iranian government’s claim “that it had no al-Qaeda “terrorists” living in its country” rather than independently confirming the veracity of that statement.