For almost eight years we have been documenting the BBC’s monochrome presentation of a proposed housing project in Jerusalem. In early 2018 we showed how four BBC reports concerning Givat HaMatos had promoted the opinions of a political NGO and the EU but – in breach of editorial guidelines – had failed to provide BBC audiences with any alternative views. 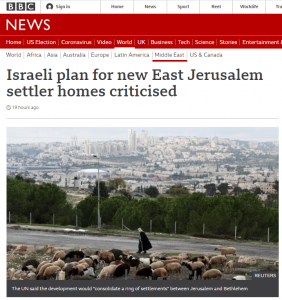 “The United Nations and European Union have criticised an Israeli plan to build 1,250 homes for Jewish settlers on the edge of occupied East Jerusalem.

Israel has invited bids for the construction in the Givat Hamatos area.

A UN envoy warned it would damage prospects for a future contiguous Palestinian state.”

The report goes on to further amplify – and provide links to – statements made by representatives of those two bodies:

“The UN Special Co-ordinator for the Middle East Peace Process, Nickolay Mladenov, said he was “very concerned” by the step and called for it to be reversed.

“If built, it would further consolidate a ring of settlements between Jerusalem and Bethlehem in the occupied West Bank.

“It would significantly damage prospects for a future contiguous Palestinian State and for achieving a negotiated two-state solution based on the 1967 lines, with Jerusalem as the capital of both states,” he added.

“European diplomats who visited the area on Monday to protest against the plan were heckled by Israeli nationalists.

A video posted by Israeli public broadcaster Kann showed a crowd shouting “shame on you” at the diplomats, and accusing them of anti-Semitism and supporting terrorism.”

As well as including a version of a partisan map (which does not even inform readers where Givat HaMatos is located) created by the political NGO B’Tselem which is frequently found in BBC content, the report promotes – and links to – debatable claims from another political NGO, ‘Peace Now’.

It accused Mr Netanyahu’s government of “taking advantage of the final weeks of the Trump administration in order to set facts on the ground that will be exceedingly hard to undo in order to achieve peace”.”

Readers are also provided with the unchallenged view of a Palestinian Authority representative:

“Nabil Abu Rudeineh, a spokesman for Palestinian Authority President Mahmoud Abbas, said the tender was part of Israeli efforts “to kill the internationally-backed two-state solution” – the concept of a Palestinian state alongside Israel long touted as formula for resolving the Israel-Palestinian conflict.”

At no point, however, does the BBC’s report include comment from either the Israeli government or the Jerusalem municipality. Nor are they informed – as Jerusalem’s deputy mayor pointed out – that the project includes housing for Arab residents of Beit Safafa.

“More than 600,000 Jews live in about 140 settlements built since Israel’s occupation of the West Bank and East Jerusalem in the 1967 Middle East war.

“4.3.6 When dealing with ‘controversial subjects’, we must ensure a wide range of significant views and perspectives are given due weight and prominence, particularly when the controversy is active. Opinion should be clearly distinguished from fact.”

In almost eight years of coverage of the topic of the proposed building project in Givat HaMatos (which was the site of temporary housing for new immigrants from the former USSR and Ethiopia from 1991 onwards), the BBC has never presented its audiences with any viewpoint which contradicts the narrative advanced by the political NGOs and foreign organisations such as the EU which it repeatedly chooses to quote and promote. This latest report shows no improvement and likewise fails to present any challenge to the notion that construction of housing at that location would “significantly damage prospects for a future contiguous Palestinian State and for achieving a negotiated two-state solution”.

And so we see just how seriously the BBC takes its obligation to ensure that “a wide range of significant views and perspectives are given due weight and prominence”.

MAPPING THE BBC’S USE OF PARTISAN MAPS