Back in August we noted that, not for the first time, an attack across Israel’s border with Syria was not considered newsworthy by the BBC until Israel responded.

The practice was repeated when, on November 17th, explosive devices were found inside Israeli territory in the south Golan Heights. The first BBC audiences heard of that incident was over 24 hours later when, on November 18th, the BBC News website published a report headlined “Israel strikes ‘Iranian military sites’ in Syria after bombs found in Golan” and illustrated with a photograph from 2019 which does not reflect the location of the story. 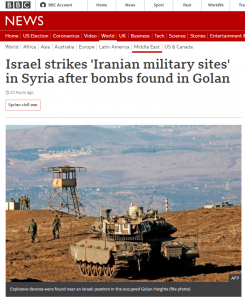 Like that headline, the report began by telling readers what happened last in the chain of events:

“Israel’s military says it launched air strikes against Iranian and Syrian military targets in Syria overnight, after explosive devices were found in the Israeli-occupied Golan Heights.”

Along with information about the incident provided to reporters by the IDF Spokesman, the report promotes claims from the Syrian regime without any evidence of verification by the BBC.

“Syrian state television showed blasts in the sky above the capital Damascus before dawn on Wednesday.

“The Israeli enemy launched an aerial aggression from the direction of the occupied Syrian Golan that targeted the southern region as the Syrian air defences confronted it and downed a number of rockets,” a military source later told the official Sana news agency.

The source added: “Three soldiers were martyred in the aggression, and a soldier was injured, in addition to causing material damage.””

The BBC’s report also unquestioningly promotes unverified claims made by a UK-based organisation:

“The Syrian Observatory for Human Rights, a UK-based monitoring group, reported that the strikes targeted air defence positions near Damascus airport and south-east of the city, as well as positions and ammunition depots used by pro-Iran fighters near Sayyida Zainab and Kiswa.

Seven foreigners were killed in addition to the three Syrian soldiers, it said.

They comprised five fighters who were “likely Iranian and belonging to the Quds Force”, and two others who may have been Lebanese or Iraqi, it added.”

The report suggests false linkage between the incident and an unconnected visit to the region by the US Secretary of State.

“The latest strikes took place hours before US Secretary of State Mike Pompeo was due to arrive in Israel for a three-day visit.”

Notably, while no information is provided concerning the failure of both the 2017 Russian ‘safe zones’ plan and the UN forces responsible for overseeing the demilitarised zone between Israel and Syria to prevent this latest Iranian initiated incident and the previous one, the BBC chose to amplify the following statement from inadequately identified sources:

“Western intelligence sources suggest Israel has stepped up strikes on Syria this year with US approval, in an effort to check Iran’s military reach.”

To date the BBC has shown remarkably little interest in informing its audiences of the activities of Iran and its proxies and partners in the area adjoining Israel’s border with Syria.