Following US Secretary of State Pompeo’s declaration that the BDS campaign is antisemitic in nature, the BBC published an article on November 19th which was previously discussed here. The following day an Arabic version of that article – headlined “What is the worldwide BDS movement which calls for a boycott against Israel?” – appeared on the BBC Arabic website.. The Arabic translation has made alterations to the English original as follows: 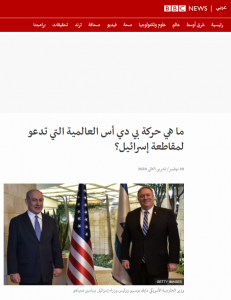 1) The last paragraph has been removed from the Arabic version of the article:

“Last year, Germany’s parliament said the actions of the BDS, such as the placing of ‘don’t buy’ stickers on Israeli products, were reminiscent of the ‘terrifying’ Nazi campaign against Jewish people under Adolf Hitler.”

As noted in our post discussing the English language version, the Bundestag did not just make the quoted comparison regarding a specific BDS practice; it also passed a resolution which labelled the entire BDS campaign as antisemitic. Nevertheless, BBC Arabic editors chose to keep that whole paragraph from view.

This is not the first time that BBC Arabic has misleadingly omitted information informing audiences of the acceptance of American and Israeli positions in Europe and elsewhere. Just last month it failed to mention that Ahlam Tamimi, the terrorist who facilitated the Sbarro bombing of August 2001, is categorised as such not only by the United States and Israel but also by the United Kingdom, the European Union and many others – as a member of Hamas’s ‘Izz ad-Din al-Qassam battalions.

The exact same happened a year ago, when BBC Arabic published a Palestinian Islamic Jihad (PIJ) backgrounder which selectively pointed out that “the United States views the movement as a terrorist ‘organisation’”, without clarifying that the same is true for the United Kingdom and the EU (and also Japan, Australia, New Zealand and Canada).

2) BBC Arabic added to its version of the article the following Anadolu agency photograph of plane hijacker Leila Khaled, together with the caption “Palestinian persona Leila Khaled attends a conference of solidarity with the Palestinian people in South Africa”. 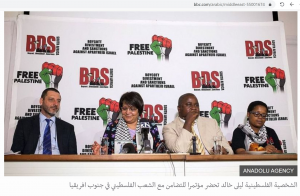 Leila Khaled is not a mere “persona”: her public profile stems directly from her past terrorist actions of hijacking two civilian flights. In the first of the two hijackings (August 1969), she and Salim ‘Issawi ceded all hostage TWA passengers the to the hands of the Syrian regime, resulting in six Israeli civilians being separated from the rest of the group which was released within 24 hours. The four women among the Israelis were released soon afterwards, while the two men, Saleh Mualem and Shlomo Samueloff, were held in  captivity for several months, only to be freed in a prisoner exchange. During the second unsuccessful hijack attempt (September 1970), Khaled’s partner Patrick Argüello shot and severely wounded flight attendant Shlomo Vider, who struggled with him while unarmed.

Khaled is also a politburo member of the Popular Front for the Liberation of Palestine – a terrorist group widely recognised as such (not only by the US but also by the European Union, Japan, Canada and Australia) and to this day she vehemently supports what she refers to as “the armed struggle” against Israel and Zionism.

“Notwithstanding [the fact that] most Arab countries have been boycotting Israel ever since its establishment until recent times, the BDS movement was launched in 2005 via an initiative of Palestinian civil society and several Palestinian activists such as Omar Barghouthi, with the purpose of shedding light on the condition of the Palestinians in the West Bank and the Gaza Strip under Israeli occupation and blockade.
The movement was founded following the collapse of Israeli-Palestinian peace negotiation and the acts of violence seen by the second Intifada, as thousands of Israelis and Palestinians were killed between 2000-2005.
The movement adopted the model of the boycott movement against the racial segregation regime in South Africa, since according to its view Israel had already created a state of racial segregation between the Jordan river and the Mediterranean sea. This is why, it says, Israel must be pressured economically, and [all] efforts to admit it to international circles must be fully opposed, like what happened with the former South African regime.

The movement says that it acts to put pressure on Israel so it adheres to international law and fulfil three objectives, which are:

The inaccuracies are as follows:

Regardless of the debate surrounding the issue of when the BDS campaign began (its roots actually go back to joint Western-Arab activities during the 2001 Durban conference), the reasons for its 2005 emergence are rather different to those portrayed by BBC Arabic. The July 2005 Palestinian civil society call which is commonly (but inaccurately) referred to as the movement’s founding manifesto does not address “the blockade” at all. The lifting of the blockade only began to appear in Palestinians’ list of demands in 2007, following Hamas’s takeover of the Gaza Strip.

Furthermore, the BDS movement was not launched with the intention of “shedding light on […] the Palestinians in the West Bank and the Gaza Strip” in particular. As is evident from the 2005 document (and others which followed), quite the contrary: every time the situation in the 1967 territories was cited as one aspect of Israel’s oppression, along came supporters to clarify that the movement would not be satisfied with any arrangement that would treat Arab Israelis or Palestinians abroad separately from the others.

Perhaps the most remarkable of BBC Arabic’s false assertions about the BDS campaign is the way in which it implies that the foundation of the campaign was connected to the murders of Israelis by Palestinian terrorists between 2000-2005. Palestinian BDS supporters have never come close to formally recognising any group of Israeli civilians as genuine victims of the conflict, not even within the frame of the common “mutual violence” euphemism. Moreover, given that Palestinian civil society joined the BDS campaign at the later stage of 2005 (compared to the Western efforts to launch a similar campaign since 2001) exactly when the Intifada was subdued, one could claim that it was that which brought those who still sought Israel’s demise to try and weaken it with a different tactic.

4) Notably, the entire passage added by BBC Arabic uses no direct quotations despite using BDS campaign phrasing and terminology almost word for word, for example when describing the three demands of the movement. This stands in contrast to the fact that BBC Arabic’s editors have put the entire original English language description of Israel’s position inside quotation marks – creating the false impression that it is quoting an Israeli statement:

“Israel has long claimed: ‘BDS opposes the country’s very existence and is motivated by anti-Semitism. It vehemently rejects any comparison with the apartheid – the state-sanctioned racial discrimination of black people during white-minority rule in South Africa – as a smear tactic.’”

BACKGROUNDER: THE INTRINSIC ANTISEMITISM OF BDS