Throughout the past eight months the BBC has produced numerous multi-platform reports on the topic of the Coronavirus pandemic in the Gaza Strip, beginning even before any cases were found there.

The messaging to audiences in those reports has been remarkably uniform, promoting talking points relating to population density, poverty and an inadequate healthcare system. As we have previously observed, many of the BBC’s reports have promoted the false notion that the state of healthcare in the Gaza Strip is primarily attributable to counter-terrorism measures imposed by Israel and Egypt following the 2007 violent take-over of the territory by the terrorist organisation Hamas. Notably, the same messaging has been promoted in campaigns run by political NGOs.

However BBC audiences have not been provided with any significant information on how infighting between Hamas and Fatah – along with Hamas’ prioritisation of terror over civilian welfare – has affected the standard of living and services such as water, power and healthcare in the Gaza Strip.

On November 22nd the BBC News website published its latest article on the topic, titled “Covid: Gaza health system ‘days from being overwhelmed’”. 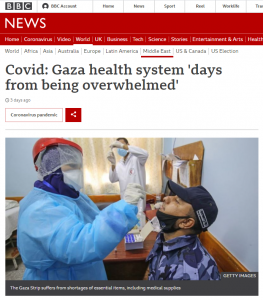 Of Gaza’s 100 ventilators, 79 are already taken up by Covid-19 patients, said Abdelraouf Elmanama, of the enclave’s pandemic task force.”

The caption to the main image illustrating the report tells readers that “The Gaza Strip suffers from shortages of essential items, including medical supplies”.

“Densely populated Gaza, with two million residents and high levels of poverty, is vulnerable to contagion.”

The caption to a video embedded in the report which dates from October 10th reads “Citizens in Gaza are struggling to deal with the pandemic amid an ongoing blockade by Israel and Egypt”.

“Gaza is subject to a longstanding land, sea and air blockade by Israel and Egypt that has devastated its economy and, along with disputes between its Islamist Hamas rulers and rival West Bank-based Palestinian Authority, impaired its public health system.”

That highlighted section was added to the report some three hours after its initial publication but once again BBC audiences are not given a proper explanation as to why those “disputes” have resulted in a chronic shortage of medical supplies. Neither are they informed that the restrictions imposed by Israel on the entry of goods and materials to the Gaza Strip are confined to dual-use items – i.e. those which can be used for the purpose of terrorism – and do not include medicines.

The report continues with the ‘Israel says’ formula, whitewashing the thousands of terror attacks which have been launched against Israeli civilians from the territory.

“Israel and Egypt imposed the blockade in 2007 when the Palestinian militant group violently reinforced its control over the territory a year after winning elections. The two countries say the blockade is for self-defence.” [emphasis added]

Those who bothered to read right down to the bottom of the report would find a reference to a story that conflicts with the narrative of the ‘blockade’ as the prime cause of low standards of healthcare in the Gaza Strip, to which the BBC has not given any stand-alone coverage.

“In another development, Israel has pledged to provide up to four million doses of a Covid-19 vaccine for the West Bank and Gaza Strip when it becomes available, a senior official from the Palestinian Authority told Israel Hayom newspaper.

The official said that in every agreement signed by Israel with vaccine companies, a percentage of the vaccines would be set aside for the Palestinian territories.”

Once again we see that BBC reporting on Covid-19 in the Gaza Strip promotes repeated context-deficient references to Israeli counter-terrorism measures while completely avoiding the topic of the responsibility of Hamas for the chronic shortages in the healthcare system it has run for the past thirteen years and insufficient preparation for a pandemic which affected the territory it controls later than in many other locations.